As the NFL's herd thins, our prop market options also dwindle, making it all the more important to make your bets count. Luckily we've done the legwork — join us as we break down our best player prop picks for the Divisional Round.

The Divisional Round is here and we’ve hit the books hard this week, looking into every NFL market in search of value and great numbers — so you don't have to!

We’re hitting the Under on another Ram as well as zagging while everyone else is zigging on a certain quarterback rushing total.

Without further ado, we present our free Divisional Round player prop picks and predictions.

The Rams have been uncharacteristically heavy on the run game of late and are rushing the ball at a 48% clip since Week 15. That works out to the seventh-highest mark in football and it's easy to see that Matthew Stafford’s struggles are a big reason for the change in the game plan for Sean McVay.

Another big angle here is the health of the Rams quarterback, who is dealing with a toe injury and a plethora of other injuries from earlier in the season that may be adding up. Last week’s 17-pass performance was the least active passing game in his professional career and there might be a reason he had thrown eight interceptions in his four games before the Wild Card game.

Stafford will also be without his starting left tackle, Andrew Whitworth, who is Pro Football Focus’ No. 1 pass-blocking tackle in football. Facing a healthy Tampa Bay front seven could make things a little more uncomfortable for Stafford on Sunday. The Bucs create the second most pressure in football at 28.7% and Todd Bowles’ defense blitzes at the highest rate in the league.

His passing total sits at 280.5 yards, which is a three-week high, but the quarterback has failed to top 250 passing yards in four of his last five games.

The Buccaneers allowed 258 yards to Jalen Hurts last week, but with the Eagles trailing by 14 points early, all Philly could do was pass. The last good QB this Bucs defense saw was Josh Allen, who threw for 308 yards but needed 54 passes to do so.

With McVay establishing the run game and now with two healthy backs, expecting 40 passes — something Stafford hasn’t done since Week 10 — might not be the smartest thing here.

We still think Akers’ rushing total is too high, but there is a reason the books set it at 56.5 against one of the best rush defenses in football: they expect the Rams to run the ball on Sunday.

Missing the best pass blocker in football and facing a healthy defense that ranks fifth in EPA/play against the pass is not a good situation for Stafford to top his passing total of 280 yards. With questions surrounding his health compounding this, we’d take the Under as low as 270.5 yards. The market agrees as well, as we’re starting to see this number fall as FanDuel is sitting at 277.5.

With all the attention on Josh Allen's rushing prop for the second straight week, his Sunday opponent’s rushing total might be offering the best number.

In the meeting earlier this season, Mahomes led his team in rushing with 61 yards on eight carries — with a long of 21 yards. He finished with 29 rushing yards last week in a game that didn’t favor QB rushing and took off nine times for 64 yards versus the Broncos in a neutral game script in Week 18.

Over his last seven playoff games, the former MVP is averaging 31 rushing yards. His lack of rushing production versus the Bills (five rushes for five yards) in the playoffs last season can be attributed to Mahomes’ toe injury that was aggravated in the Divisional Round versus the Browns.

The Bills have not faced many athletic or mobile QBs this season but Cam Newton ran for 71 yards vs. Buffalo in Week 15 and pocket passer Mac Jones had a 16-yard scamper last week.

With this game likely to go back and forth, we’re expecting a ton of points. Mahomes and Allen will get creative and use their tools in what will be the most entertaining game of the weekend.

Jimmy Garoppolo’s injury issues are a concern for us and we’re seeing his passing total drop because of them. Garoppolo opened with a passing total of 252.5 yards last week versus the Cowboys, and that number has fallen nearly 20 yards this week to 228.5 yards after opening at 246.5 yards earlier in the week. The arrow isn’t pointing up for Jimmy G but that isn’t scaring us away from jumping on one of his receivers in a game in which the 49ers are nearly 6-point dogs.

Jauan Jennings hasn’t been the flashiest name in San Francisco with Deebo Samuel, George Kittle and Elijah Mitchell garnering more attention from defenders, but his role has been expanding over the last few weeks. Jennings has seen at least five targets in five of his last six games and since Week 14, and the No. 3 receiver has just two fewer targets than Samuel. His 8.5 yards before the catch is the best on the team over that stretch and, to top it off, he has three touchdowns as well and is paying +450 to score this weekend.

Although that TD is tempting, we’re looking into his receiving yard total that has also dipped thanks to Garoppolo’s passing yard total falling. Jennings’ yardage total is as low as 25.5 yards (PointsBet) and three yards shorter than last week. He is drawing roughly 18% of the team’s targets over the last six weeks and this lower total is less volatile than the other San Francisco receiver totals with Garoppolo’s issues. Kyle Shanahan also loves the big receivers’ blocking skills which are keeping him on the field and are a big reason he has become more trusted in the passing game.

Jauan Jennings is developing into a real, impactful player in this offense right in front of our eyes. Easily beats 21 off the line and then proceeds to break a tackle after the catch.

Also perfectly placed ball from Garoppolo on 3rd-and-6 in OT with pressure in his face. pic.twitter.com/SKBv7Zw59V

Chandon Sullivan is the weakest Packer defensive back by far, as the slot corner has a Pro Football Focus ranking of 100 out of 121. Jennings runs roughly 50 percent of his snaps out of the slot and can take advantage of this matchup. We’re buying the dip and hitting the Over on his receiving total of 25.5, as Jennings has 25 receiving yards in five of his last six weeks.

Coming off a summer Achilles injury, Cam Akers had a ton of pop in his step versus the Cardinals last week and had 17 carries to Sony Michel’s 13 and saw eight more snaps. If you bet on Michel last week, you’re fully aware of the role Akers had and it was better than Michel’s. Now we’re seeing an opening rushing total of 56.5 rushing yards on Akers, which is higher than Michel’s opening rushing total from last week.

Akers did see the majority of the snaps in the Wild Card game but he still conceded 13 carries to Michel and the Rams had the benefit of playing with a comfortable lead for the majority of the game. That might not be the case Sunday in Tampa Bay, as the Rams are 3-point road dogs.

No defense sees fewer rushing attempts per game (21.3) than the Buccaneers and there’s a good reason for that. Opposing running backs are rushing the ball just 15.9 times per game versus the Bucs and gaining under 4.00 yards per carry. To beat the Buccaneers, teams need to pass and that leaves Akers and his bloated rushing total in a tough spot. He’s splitting carries, facing one of the toughest rushing defenses and the Rams could be opening up the passing game a little more Sunday. This is one of the fastest defenses in football and a reason why they're so hard to run against.

Akers did a ton of damage versus the Cardinals last week but that defense had struggled mightily against the run this season. He was effective in the passing game but also finished with just 55 yards on the ground on 17 carries and the 3.2 yards per carry might surprise some with how much buzz the back is getting. The Rams have been running the ball a lot lately (48%) thanks to Stafford’s struggles, but the quarterback played competently in the Wild Card Round and no teams beat the Bucs on the ground. Akers might also have a bounty on his head after the way he treated Budda Baker after their collision last week.

In their Week 3 meeting, Michel took 20 carries for 67 yards versus this same defense in L.A. and with both backs likely in the fold Sunday, we’d be surprised to see any back get 15 carries. This is still a running back coming off a major Achilles injury and is following his first game since last season. His rushing total is possibly seven to 10 yards too high in our books. 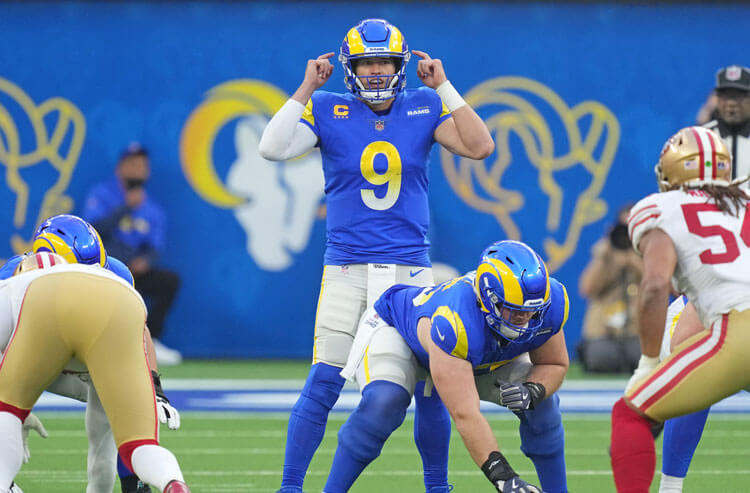