In a Super Bowl LV rematch, Kansas City will travel to Tampa Bay to face the Bucs. For our Sunday Night Football player prop picks, we anticipate Mahomes and the kickers to face some adversity, while a certain Chiefs' RB will break out. 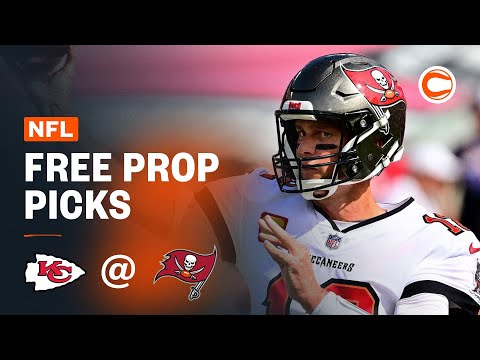 In a rematch of Super Bowl LV, the Kansas City Chiefs will look to avenge their championship loss to the Tampa Bay Buccaneers Sunday night in a game that will take place in Florida following Hurricane Ian.

The Bucs are getting healthier on offense and face a Kansas City team that might be thin at wide receiver. Can Mahomes rebound vs. this defense Sunday night? Find out in my free NFL player prop picks for Sunday Night Football between the Chiefs and Buccaneers.

The last time Patrick Mahomes saw this defense, the Chiefs failed to score a touchdown in Super Bowl LV 19 months ago. The KC quarterback finished 26-for-49 passing for 270 scoreless yards and two picks. He took three sacks and was under pressure all game.

Heading into Week 4, this is still an elite Tampa Bay defense which is the reason why the team is 2-1 while supporting a sputtering offense. Todd Bowles’ defense has five interceptions already this season, which includes one off of Aaron Rodgers and at least one per game.

Mahomes has some of his receiving talents on the trainer’s table this Sunday as Mecole Hardman was limited and Marquez Valdez-Scantling was DNP at practice this week.

With Antoine Winfield likely in charge of taking away Travis Kelce, it could be another tough day through the air for Mahomes who was picked off last week in a comeback attempt.

In lieu of a running game

The Chiefs will have to pass on Sunday. They’re already running at a 37% clip and now face one of the best run-stopping teams. Injuries are going to play a huge part here as Marquez Valdez-Scantling (17% target share) was a DNP at practice Thursday while Mecole Hardman was limited after a DNP on Wednesday.

JuJu Smith-Schuster would be the common choice to hit here but I think there is better value with the Chiefs getting the running backs involved in the passing game in lieu of a running game. I’m targeting Jerick McKinnon as a result.

Clyde Edwards-Helaire has seen at least four targets in back-to-back weeks and has seen 12 targets to McKinnon’s seven, but McKinnon ran more routes than CEH in Week 3 and had the reins of the two-minute offense. Because of the better output from CEH, bettors are getting a great number on McKinnon’s receiving total at 15.5 — five yards shorter than CEH’s.

McKinnon has seen more snaps than CEH on the season and I’d expected the better pass-catching RB to see his fair share of targets operating as the third-down back.  His 37.5 total yards is also short considering the even split and CEH sitting at 61.5.

The Chiefs released kicker Matt Ammendola this week but starter Harrison Butker was DNP at practice on Thursday. He might be getting rushed back from a Week 1 foot injury.

This is not a great situation for the Chiefs’ offense as it missed a field goal and an extra-point last week while also electing to go for it on 4th down instead of taking the three points.

There aren’t any player-kicking props open as of Friday afternoon, but there are still markets we can hit and fade this KC kicking game.

Andy Reid isn’t afraid to keep his offense on the field when inside the 50 and if Butker sits, I can’t see them attempting a long field goal with whoever is kicking. If Butker plays and isn’t 100% healthy, going for it on 4th and three on the 35 might be a better option

Promo code for Chiefs vs Buccaneers

Looking to bet on Sunday Night Football? Don't miss these great offers for Chiefs vs. Buccaneers.

Chiefs vs Buccaneers SNF Prop Bets: A Rough Night in the Air May Be In Store
Provided by