The status of Kansas City Chiefs quarterback Patrick Mahomes has drawn all the eyes of the NFL betting world to the odds for the AFC Championship Game. Bookmakers expect Mahomes to be under center when the Chiefs host the Buffalo Bills this Sunday.

The Chiefs opened as 1-point favorites immediately following their win over Cleveland in the Divisional Round, with Mahomes’ status very much up in the air. And after jumping back and forth between -1 and +1, the market moved to its current stand of Kansas City -3.

Here are our NFL free picks and predictions for Bills vs. Chiefs on January 24.

The Las Vegas Superbook had Kansas City -4 before Mahomes left with a concussion in the third quarter in the Divisional Round matchup with Cleveland. They reopened the Chiefs as 2.5-point home chalk and quickly moved to -3 before Buffalo action showed up on the underdog.

"We certainly expect Mahomes to play next Sunday. We moved the line up to -3 after reading some quotes from Andy Reid that sounded positive," John Murray of the Superbook told Covers. "We had a respected player take Bills +3 (-110) and we moved to Bills +3 (-120). Most of the tickets have been on the Bills so far, although the biggest bet yet was one for $20,000 on Chiefs -3 (even). The public likes both of these teams, even though the Chiefs continue to let the bettors down. They failed to cover yet again today."

OK, first thing’s first: Mahomes looks like he’s a go. According to Ian Rapoport of NFL.com, Mahomes was slated for a light workout Wednesday (possibly listed as limited or DNP) but is expected to ramp up his practice reps the closer we get to game day.

Now that we have that out of the way, let’s state the obvious: neither team has looked good in recent efforts.

Sticking with Kansas City, the Chiefs squeaked out another close win over the Browns last Sunday, needing Chad Henne to do his best Mahomes impersonation on a third-and-14 scramble that set up a surprise fourth-and-one toss to seal the victory. But even before Mahomes left after that scary third-quarter hit, K.C. just didn’t have the killer instinct that it showed in the first eight games of the season when it went 7-1 SU and 6-2 ATS (including a 26-17 win at Buffalo in Week 6). That’s become a long-running issue for this team.

The Chiefs are 8-1 SU in their last nine games (only loss came with no starters in Week 17) but have covered the spread just one time in that span. The offense went from averaging 31.6 points through eight weeks to posting 26.9 in the most recent nine outings, while the defense allowed opponents to hang around with 25.2 points against per contest. And when you let teams hang around, bad things happen.

The Bills have also been far from dominant in their two playoff wins over Indianapolis and Baltimore. In fact, Buffalo has been out-yarded by almost 200 yards of offense in the postseason and has touched the football for a total of 50:10 in two games. But the defense has done the big things that win games: cause chaos and tighten the bolts in the red zone.

Buffalo sacked elusive Ravens QB Lamar Jackson four times in the Division Round, forced five fumbles, and snagged an interception in their own end zone which went 101 yards the other way for a touchdown. That’s just part of a red-zone defense that has given up only two touchdowns in its opponents’ eight red-zone tries – a sharp turnaround for this stop unit which has struggled with red-zone defense in 2020.

Perhaps the biggest edge working for the Bills heading into Sunday is the Chiefs’ possible change in game plan when it comes to Mahomes. His ability to wriggle out of pressure for extra gains or break off key yards with a designed keeper had rival defensive coordinators staying awake at night. But with fear that another hit might send him to the sidelines (and a foot injury to boot), the Bills won’t have to worry about those “sneaky” yards.

I assume once Mahomes’ status is official, this line could jump over the field goal and maybe tick back to that original opener of -4 with bets flooding in on K.C. So, if you like Buffalo, perhaps wait it out for more.

Both defenses will be back to the warning track knowing the home run power in the arms of Josh Allen and Mahomes, and with speedsters like Tyreek Hill and Stefon Diggs in the mix. And because of that offensive aptitude, expect the Chiefs and Bills to play some defense on offense.

Neither stop unit is great at slowing the run game. Kansas City enters as the second-worst run defense in DVOA at Football Outsiders while also getting gashed by pass-catching RBs and YAC (yards after the catch). Buffalo isn’t one for running – handing off on only 39 percent of its snaps – but uses default handoffs in the form of short passes to RB Devin Singletary and squirrelly slot receiver Cole Beasley.

When these foes faced each other in Week 6, Kansas City marched for 245 yards on the ground behind rookie RB Clyde Edwards-Helaire (161 yards on 21 carries). Edward-Helaire has been out of order since December 20 with an ankle injury but could return Sunday, giving K.C. a solid body blow of running backs with Darrel Williams and Le’Veon Bell.

Buffalo was rolled by rookie RB Jonathan Taylor in the Wild Card win over the Colts, allowing 163 yards on 30 runs, and still gave up 150 yards rushing on 30 carries to the Ravens last Saturday. The Bills rank 25th in yards allowed per carry and with Kansas City trying to keep the pressure off Mahomes, the Mafia will face an extra dose of ground and pound – especially if CEH returns to action.

They stayed well Under the 55-point total in a rainy Week 6 meeting and will do the same in the AFC Championship.

Cole Beasley was the poor man’s Julian Edelman, who for a while was the poor man’s Wes Welker. But after Beasley reeled in 82 receptions in his second season in Buffalo (and earned Second-Team All-Pro honors), he’s on pace to sit with those other two standout slot receivers.

Beasley, who’s playing through a sore knee, was quiet in the Divisional Round and targeted just twice, finishing the day with a goose egg in receptions. He did put in work against the Colts in the Wild Card with seven grabs on seven targets for 57 yards. He finished with four catches on seven targets for 45 yards receiving and a touchdown in the matchup with Kansas City in Week 6.

With Buffalo’s rushing attack not up to snuff, expect those short hits to Beasley to work as mutant handoffs and expose a Kansas City stop unit that lacks speed in the middle of the defense and has allowed the fifth-most YAC (2,085) in the NFL. 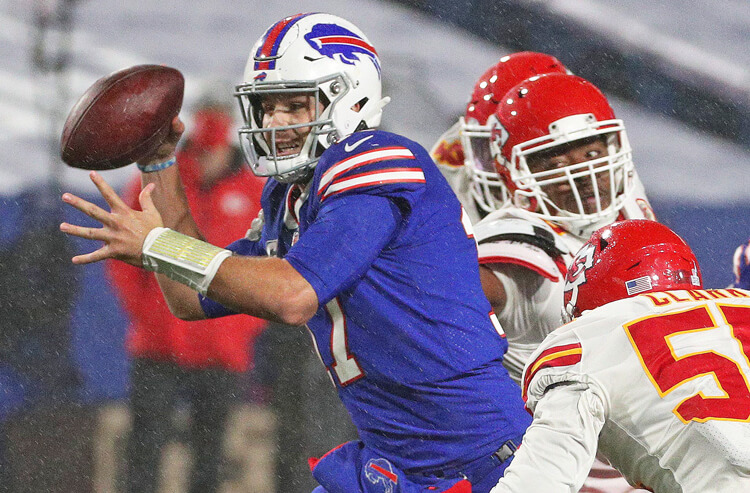 Bills vs Chiefs AFC Championship Picks and Predictions
Provided by