Wide receiver DK Metcalf is a mismatch against virtually any defensive back, but he has a plum matchup today vs. an undersized Atlanta secondary. With coach Pete Carroll saying he wants to throw downfield more to DK, he's one of our favorite Week 3 props.

NFL Week 3 odds are moving as we're now into gameday Sunday, and while the player prop markets have pretty much settled, there are still a couple of lines that offer some intriguing value.

Today, I'm looking at both sides of the same game: keying in on a very talented Seattle wide receiver who is set to get more downfield targets... and then a Falcons running back that should get back to doing damage in the passing game.

Check out the breakdown below with my latest free NFL picks and Week 3 player prop bets.

This week, Seattle Seahawks head coach Pete Carroll told reporters that he needs to "open up the passing attack," and that includes "making sure the ball is going to DK Metcalf downfield." This could certainly be lip service for the run-heavy coach who is passing at a 66% clip to open the season, but it is certainly worth noting.

Metcalf has a 23% target share through two games, but just 5.9 air yards per reception and a pretty sad 6.15 average depth of target. Last season, those numbers were 8.6 air yards per catch with a 12.24 aDOT.

He has a great matchup vs. the Atlanta Falcons at home this week. Atlanta allows 7.2 yards per pass attempt on the season (25th), and 10.1 yards per completion. The Falcons allowed Cooper Kupp and Allen Robinson to haul in 20-plus yard catches last week, while four separate Saints receivers had at least one 20-plus yard reception in Week 1 against Atlanta.

Due to the lack of downfield output, Metcalf’s longest reception total sits at 20.5 yards, which is shorter than teammate Tyler Lockett. Metcalf has at least two inches and 40 pounds on both the Atlanta corners heading into the matchup.

I doubt Carroll ups his pass rate, but getting DK downfield vs. a soft Atlanta secondary with a quarterback who has the No. 1 completion percentage over expected is a recipe for prop success.

Sticking with this Atlanta/Seattle tilt, there has been a lot of talk about Kyle Pitts and his likely breakout this week vs. the Seahawks, but it’s Cordarrelle Patterson’s receiving yards I’m targeting today — as Patterson has been the most productive Atlanta player with 178 total yards through two weeks.

With rookie Tyler Allgeier taking half of the rushing snaps, Arthur Smith will find ways to get the ball into Patterson’s hand, and that should be in the passing game. Jamal Adams is out for the Seahawks, and linebackers Cody Barton and Jordyn Brooks have been bad in coverage — both grading in the Bottom 20 at the position this season.

Patterson saw just one target last week, and that might worry some, but it’s giving us a better total this week (15.5 yards compared to 25.5 in Week 1/20.5 last week) and he’s still seeing roughly half of his 62% of snaps in the passing game — and he averaged 32.2 yards per game receiving a season ago.

The emergence of Drake London might also give Patterson more room to catch and run on the outside. London is getting 8.5 yards of cushion per route, which is tops in the league. This could be a one-and-done prop that opened at 12.5... and was hit immediately to the Over.

Miami Dolphins tight end Mike Gesicki was rumored to be on the trade block ahead of the final cuts in the offseason. GM Chris Grier denied those reports but they make a lot of sense considering his role is diminishing under Mike McDaniel’s new offensive system.

Even when he was in San Francisco, George Kittle wasn’t a high-volume pass-catcher and spends a lot of time inline blocking — something Gesicki is not accustomed to.

Through two weeks, Gesicki has taken fewer snaps than Durham Smythe and has just five targets, good for a 5.5% target share on the season. He topped his receiving total last week but that was vs. the Ravens, who gave up 469 passing yards and allowed the second-most yards per game to opposing TEs last season.

Now, Gesicki has to take on the best coverage linebackers in Buffalo’s Matt Milano. It’s a bad matchup on an offense that doesn’t look much to the TE and also rotates on passing downs with its tight ends.

This number should be 18-20 yards and some books are already dropping this total.

It didn’t take long for second-round pick Breece Hall to cut into Michael Carter’s rushing workload: The two backs are splitting carries with the rookie outgaining his teammate with a 5.6 ypc to Carter’s 4.9 ypc.

However, Carter is getting the majority of the work in the passing game... for a team that leads the league in pass attempts at 52 per contest.

Carter had five targets to Hall’s one last week and has an impressive 12 catches on 14 targets through two games. With Garrett Wilson and Elijah Moore demanding extra attention, there are yards available for Carter in a game where the New York Jets will likely be chasing points again.

Even after last week’s five-catch game, the books haven’t really adjusted Carter's receiving props. If you can get his receptions Over 2.5 at -140 or better (Unibet and BetRivers), take it and run, but when those numbers dry up — and some books are already at 3.5 — feel free to hit his Over receiving yards up to 22.5 yards.

For bet365 users, adding his receptions (2.5) and yards (19.5) to an SGP gives a +135 payout, which is my favorite play, but for others, take advantage of other books posting soft lines on his receptions or receiving yards.

Can you Diggs it?

The Miami Dolphins have the offense to push the Buffalo Bills who will likely have to play a full four quarters on Sunday.

However, starting corner Xavien Howard (DNP on Wednesday) is in danger of missing the battle and wasn’t 100% in Week 2 when Rashod Bateman beat him for over 90 yards. Add in Byron Jones (PUP) on the sideline and this once elite secondary is as weak as possible. That’s great news for the Bills’ best outside receiver in Stefon Diggs.

Through seven quarters of football, Diggs has roasted two solid secondaries in the Rams and Titans for 270 yards on 20 catches (24 targets). His 34.3% target share trails only Cooper Kupp and A.J. Brown and he's gaining yards at every level as nine of his catches are less than 10 yards while five of them have been gains of 30+ yards.

This is a massive matchup advantage in a high-total game where the Miami offense could keep Josh Allen aggressive. Buffalo is passing at 60% of the time and has been leading for the majority of its snaps.

Diggs caught 12 balls for 148 yards in an abbreviate outing last week and his receiving yard total opened shorter than it closed last week.

Jacksonville’s Christian Kirk got paid in the offseason and Doug Pederson and the Jaguars are getting him the ball — and it’s been easy for the receiver.

Kirk has at least six catches and 78 yards in both games this year and the separation he is getting is unreal which makes getting him the ball a very easy decision for a much-improved Trevor Lawrence.

Per Next Gen Stats, Kirk has seen 18 targets and zero of them have been in a tight window of less than one yard of separation. He also sits 13th in aDOT, has a 26.5% target share, and could have had a bigger game last week if the Colts had shown up.

Christian Kirk has been targeted 18 times this season. None were tight windows (< 1 yard of separation).

His receiving total has jumped just three yards from last week and although this is a tough matchup on paper, the Chargers are allowing 150 yards per game to opposing receivers and Davante Adams went 10/141/1 vs. this unit in Week 1.

Under new coach Kevin O’Connell, Dalvin Cook has not impressed on the ground. He has 107 yards on 26 carries (4.01 ypc) but has failed to gain yards after contact with a 1.6 yards per carry after first contact.

With the Vikings running 3-WR personnel more this season as opposed to Mike Zimmer’s heavier sets, Cook is struggling to get things going. Last week had a lot to do with game script and O’Connell has stated that he needs to get Cook in rhythm more but 17.5 is still too high for me.

The coach wanting to get Cook in rhythm isn’t necessarily a vote for higher usage. Cook is not a great fit for this offense and Alex Mattison is also getting carries. Justin Jefferson also didn’t have a great game in Week 2 and will be the focal point for this Week 3 offense.

Last year, the Rams (O’Connell’s offense) had an 18-carry or more performance just twice over the first 12 weeks and then went run heavy once Matthew Stafford was not 100% and seemingly throwing two interceptions per game.

Detroit is also giving up chunks of yards per play (5.9 to be exact) and 5.1 yards allowed per carry. Cook could certainly have a high-output, low-volume performance like Miles Sanders’ 13-carry, 96-yard showing in Week 1.

Red-zone carries also play a factor here as Mattison has four of the RB carries inside the 20-yard line while O'Connell has passed the ball at a 75% clip in the red zone to start the season.

O’Connell could also get the ball in his hands through the passing game as he has 11 targets through two games which are tied for the sixth most in football for running backs. THE BLITZ projects Cook for 15.56 carries. 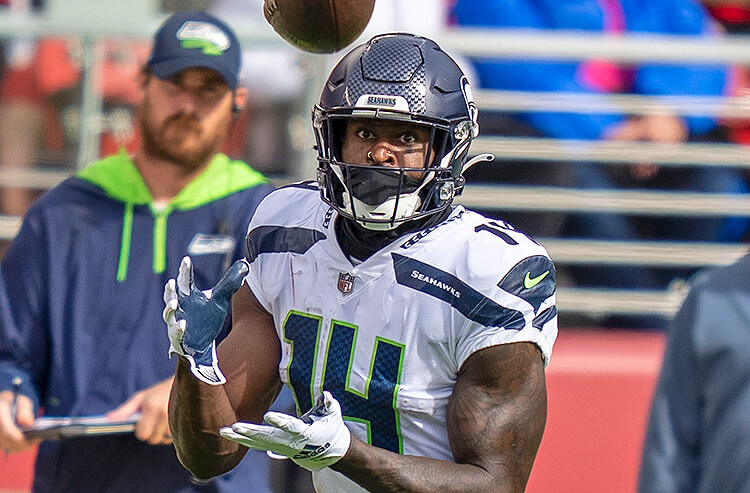