Joe Burrow threw the game away last weekend, but he'll be better in Week 2, and gets to face the woeful Cowboys. See why Dallas won't be able to compete against the Bengals, as our NFL picks predict an easy triumph.

The Cincinnati Bengals look to rebound from a game they gave away as they head to AT&T Stadium to take on the Dallas Cowboys in Week 2 of NFL action.

The Cowboys also failed to win in their season opener, but their biggest blow came in losing franchise quarterback Dak Prescott to a thumb injury. With backup Cooper Rush taking over at QB for the next several weeks, NFL betting lines hit the board with "America's Team" as a 7-point home underdog for Sunday's showdown.

Here are my best free Bengals vs. Cowboys NFL picks and predictions for September 18.

Bengals vs Cowboys picks and predictions

The Bengals should have smashed the Steelers last week, but five turnovers from superstar quarterback Joe Burrow killed them. With Burrow turning the ball over just 14 times in 16 games last season, that Week 1 performance was clearly an outlier and he should be more efficient against Dallas' defense on Sunday.

Although the Cowboys' stop-unit was actually pretty impressive last year, that had a lot to do with them leading the league in takeaways, which is a stat that tends to see regression.

Dan Quinn also took over as the defensive coordinator and blitzed far more often. That tactic might work against most QBs in the league, but won't have the same effect on Burrow, who had an incredible 122.9 passer rating when blitzed last season according to PFF.

The Cowboys don't have the firepower to keep up — especially with Rush at QB. Ezekiel Elliott is washed, CeeDee Lamb is their only threat out wide, and their O-Line is in shambles. That's a recipe for scoring droughts even when Dak returns to the lineup.

The Bengals were just a touchdown away from winning their first-ever Super Bowl in February. After spending big to shore up their porous offensive line in the offseason, they had high expectations entering Week 1.

However, they dropped the ball at home in that contest, losing 23-20 in overtime despite outgaining the Steelers 432-267. Five turnovers from Burrow were the biggest reason, although a missed extra point and a 29-yard field goal from the normally reliable Evan McPherson didn't help.

They should be able to bounce back against a Cowboys squad that could be in trouble if Week 1 was any indication. Sure, the Cowboys lost Prescott to a thumb injury, but even with him under center, they looked inept against Tampa Bay. They lost 19-3 but the scoreline could have been even more lopsided if the Bucs had finished drives and not leaned on their ground game in the second half.

The Cowboys couldn't even make it inside the Tampa Bay 30-yard line and had just 244 yards and 3.8 yards per play, despite Prescott playing until midway through the fourth quarter. Rush might not even be that big of a dropoff from Dak, since the backup led the Cowboys to a 20-16 win against the Vikings in his lone start last year. However, with this supporting cast, it won't matter.

Elliot has been declining for years, the Cowboys traded Amari Cooper for a bag of peanuts in the offseason, and the line (which has long been the strength of this offense) is in big trouble. Right tackle La'el Collins leaving in free agency hurt, losing All-Pro left tackle Tyron Smith until December was an even bigger blow, and now left guard Connor McGovern is sidelined as well.

The Cowboys don't have much on defense besides Micah Parsons as an elite pass rusher and Trevon Diggs as a ballhawk that gets burned. Their interior line is a mess and can't stop the run, with Leonard Fournette picking up chunks last week, and Joe Mixon should be able to do the same.

The lookahead Over/Under for this game was 50.5 before plummeting to 44.5 on Monday morning after the reports on Dak came out. While the spread hasn't really moved since then, the total has continued to fall throughout the week and now sits at just 41.5. That means any value on the Under is pretty much gone unless you want to chase steam.

Although the Cowboys' offense looked terrible last week they might not be quite as atrocious on Sunday since Cincinnati's defense isn't quite at the level of Tampa Bay's.

Meanwhile, Cincinnati's offense is capable of putting up points on anybody, scoring more than 30 points in seven of its last 11 regular season contests with Burrow at QB last year. The Bengals were certainly able to rack up yards against Pittsburgh in Week 1, and while the Cowboys limited the Bucs to 19 points, that had a lot to do with game script and Tampa Bay's offense settling for field goals.

The Cowboys are 1-4 ATS in their last five home games while the Bengals are 5-0 ATS in their previous five contests on the road. Find more NFL betting trends for Bengals vs. Cowboys. 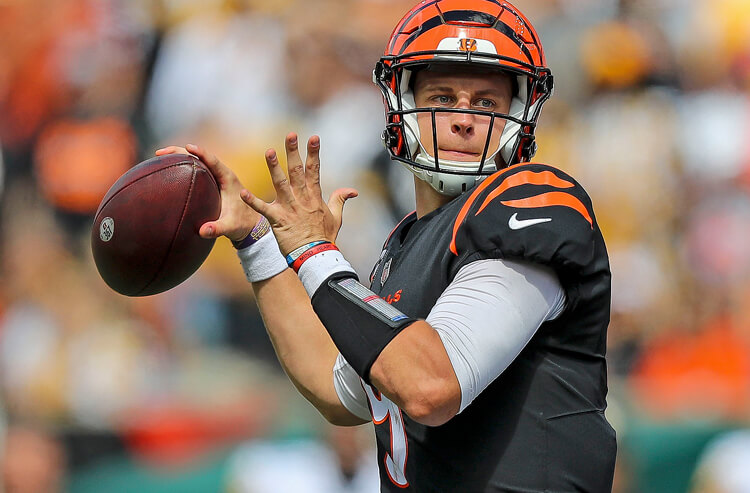