The early game on Thanksgiving may not be the best, with the Chicago Bears visiting the Detroit Lions, but a pair of tailbacks have a great matchup to deliver big performances — and a quicker game. Check out our full player prop picks below. 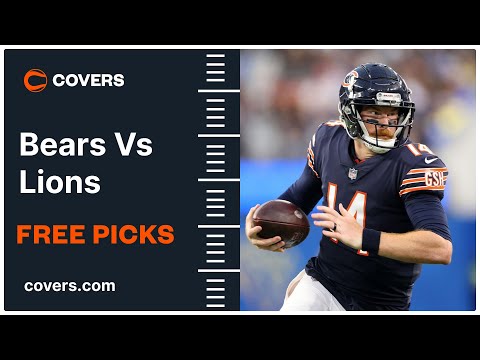 Thanksgiving can make even the Detroit Lions vs. Chicago Bears look like an NFC title game, as the NFC North’s two basement dwellers will kick off our Turkey Thursday. Andy Dalton is the likely starter for the Bears while Jared Goff’s availability is still up in the air.

Will we see any offense in the holiday’s lowest-totaled game? Find out in our favorite free player props and predictions for Bears vs. Lions.

Andy Dalton came into Week 11’s game in relief of Justin Fields and immediately hit receiver Darnell Mooney with a 60-yard TD. Mooney finished with five grabs on 16 targets (career-high) and 121 yards. The absence of Allen Robinson boosted Mooney’s target share and Dalton could be looking his way again Thursday as Robinson was DNP Monday and Tuesday, and is at risk of missing Week 12 with a hamstring injury. Mooney blasted off against the Lions back on Week 4 and finished with 125 receiving yards.

The jump from Dalton to Fields is better for Mooney, as the Red Rocket owns a 65.3 completion percentage compared to Fields’ 58.1 percent. In his Week 1 start, Dalton threw seven passes Mooney’s way in a negative game script. Chicago is a 3-point road favorite but with Detroit playing competitively over three of its last four games, we don’t see Chicago running up the score here and playing with a comfortable lead where it would abandon the pass.

The Lions’ defense held the Browns’ receivers in check last week but did allow Diontae Johnson to go for 7/83/0 on 13 targets in non-optimal weather conditions in a close game two weeks ago. Detroit allows 162 yards per game to opposing wide receivers (15th), and gave up 11/256/2 to Brandon Cooks and Will Fuller in last year’s Thanksgiving Day game.

Mooney’s receiving yard total has closed at 50.5 yards or less every week this year but opened up at 55.5 yards this week after his performance versus the Ravens. Robinson missed practice again Tuesday which should set the table for Mooney to be the No. 1 option in the Chicago passing game. Mooney has a 27 percent target share over the last three games as well as 39 percent of the air yards. Both marks lead the team.

D’Andre Swift has proven to be QB-proof over the last two games, as he amassed at least 130 yards on the ground in back-to-back games with both Goff and Tim Boyle under center. He's accounted for over 49 percent of the Lions’ offense in the last two games and should again be the focal point of this offense that is starting to move off the +3.5 to the +3.

Chicago will be without Khalil Mack and possibly Akiem Hicks, which is a tough blow to this defense. Surprisingly, the Bears have given up the fourth-most explosive rush plays this season at 33. With the lowest total on the Thursday slate, we like this game to mimic the Lions' game in Pittsburgh, where neither team dominates and clock possession and the turnover battle will be the most important things.

After Swift’s 130-yard rushing game versus the Steelers, Swift’s rushing total jumped from 44.5 yards to 55.5 yards. This week, it opens at 58.5 after another 130-yard rushing performance last week.

The Bears keep it heavy in the box and used a nickel corner on just 18 of 81 defensive snaps last week but still sit in 27th in success rate vs. the run. Swift totaled 136 rushing yards on 14 attempts versus the Browns’ No. 7 rush defense last week.

David Montgomery has not reached 65 yards on the ground since returning from injury in Week 9. He’s totaled 121 rushing yards on 27 carries over the last two weeks and opens up this week with a rushing total of 75.5 yards. Detroit held Najee Harris to 4.0 yards per carry but a high-volume load for the rookie RB helped him hit the 100-yard rushing total on 26 carries. Could Montgomery get that kind of volume with Fields on the bench and a close game on the horizon?

The Lions have played competitively in three of their last four games, and over the last two weeks have seen their opponents run 31 and 36 times. Montgomery has seen 84 percent of the team’s RB rushing totals over the last two games and with a total of 76.5 yards, he would likely need to rush the ball 17 times (4.5 yards per carry vs. 4.4 yards per carry allowed). Montgomery has topped that number just twice this year but both those games were wins and one was against the Lions, where he ran 23 times for 106 yards and two scores.

Montgomery will face a Detroit rushing defense that sits in the bottom-15 in success rate against the run and with a coach who is on the hottest of hot seats, playing conservative is likely in the Nagy playbook Thursday.

Taking both RBs on their rushing total is inversely correlated, but with both QBs (possibly Goff and Dalton) being anything but impressive, this has a boring, run-heavy game written all over it, especially with a game total of 41.5. We like Montgomery to flirt with 20 touches. 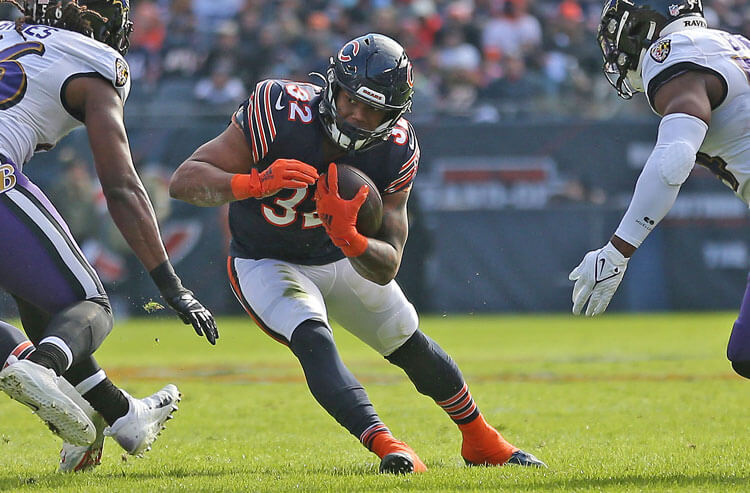