The Wisconsin Badgers and Arizona State Sun Devils play similar games, so the Las Vegas Bowl is going to come down to who can execute better. As our college football betting picks highlight, we're leaning on the bowl game experience of the Badgers.

In what should be an interesting clash between two teams that don’t play all that differently, the Wisconsin Badgers take on the Arizona State Sun Devils in the Las Vegas Bowl at Allegiant Stadium in the final game of Thursday's college football bowl game schedule.

Will the Sun Devils take advantage of a West Coast game by defeating the Badgers in Sin City? Keep reading our Wisconsin vs. Arizona State picks and predictions to find out.

Wisconsin has gotten a pretty large majority of the bets in this game, but the Badgers have gone from -7 at open to -6.5 on quite a few sites. As for the total, this thing has gone from 43 to down to as low as 41.5. It can, however, be found as 42.

If you're signing up for a new sportsbook for the Las Vegas Bowl, here are two of the best welcome bonuses available:

Arizona State is 3-8 against the spread in its last 11 bowl games. Find more NCAA betting trends for Wisconsin vs. Arizona State.

It’s generally pretty tough to trust the Badgers to score enough points to win by at least a touchdown in a big game, but the reality is that they might not need to score many in order to do so here. The Sun Devils are going to be without their leading rusher in this game, as Rachaad White has opted to prepare for the NFL Draft. White rushed for 1,006 yards with 15 touchdowns this year, and he was really the only consistent source of offense for an Arizona State team that struggled to put up points this season.

Jayden Daniels has some legitimate dual-threat ability under center for the Sun Devils, but he’s not a good enough thrower to really scare this Badgers secondary.

Wisconsin gave up just 16.4 points per game this year, which was the sixth-best mark in the nation. This Badgers defense was absolutely dominant during the year, and the passing defense was no exception. Wisconsin gave up only 175.6 yards per game through the air, which was also good for sixth in the nation. The Badgers gave up only nine passing touchdowns this year, which was tied for third in the country. They also had 15 interceptions and that is why it’s hard to believe that Daniels will be able to make enough plays with his arm here.

Offensively, the Badgers will lean heavily on freshman running back Braelon Allen, who rushed for 1,109 yards and 12 touchdowns on 7.1 yards per carry this year. Allen looks like the next great Badgers running back, and he has the look of a player that will eventually be making big plays on Sundays. Arizona State’s rushing defense has been inconsistent this year, as the team has given up less than 100 yards on the ground in three of the last four. However, the Sun Devils also gave up at least 200 yards rushing in three games this season.

Don’t be surprised if this is another game in which Arizona State struggles to contain the run, and that could open things up for quarterback Graham Mertz to make some plays in the play-action game.

The Badgers are allowing only 16.4 points per game this season, while the Sun Devils are giving up only 20.9 on the year. These are two teams that owe all of their success to the defensive side of the ball, and neither one of these programs has an explosive passing game. If that’s not a brilliant recipe for an Under, then what is?

The Under is 6-0 when Arizona State has played in non-conference games over the last three seasons, with the average total points scored in those games being 37.2 per game. On top of that, the Under is also 9-5 when Wisconsin has played with two or more weeks of rest under head coach Paul Chryst.

These two programs have had very different luck when it comes to bowl games, as the Badgers are 5-2 against the spread in their last seven and the Sun Devils are 3-8 against the spread in their last 11. Sometimes it’s best not to overthink these things, as those numbers aren’t that surprising when considering that Wisconsin has consistently been a much better team than Arizona State.

This year, the Badgers struggled to score points but they were one of the best teams in football on the defensive end. With that in mind, it wouldn’t be all that shocking if Wisconsin held Arizona State to 17 or fewer points in this game. It’s also worth noting that the Badgers are 11-3 straight-up and 9-5 against the spread when playing in a game with a total of 42 or less under Chryst. They’re also 4-0 both straight up and against the spread in bowl games played in December under Chryst.

Did you know that if you parlayed our Wisconsin vs. Arizona State picks, you could win $26.45 on a $10 bet? 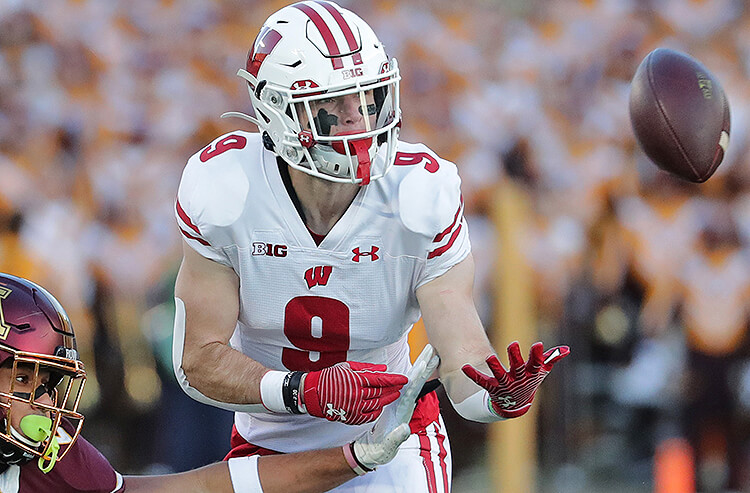