Tennessee vs Purdue Music City Bowl Odds, Picks and Predictions: Purdue Grooves to Its Own Tune

The Music City Bowl's line was flipped on its head when two Boilermaker stars opted out. But the team that's left behind isn't all that bad, and we wonder if the line hasn't shifted too much. Get the scoop with our Tennessee vs Purdue picks.

It's an SEC-Big Ten showdown in the Music City Bowl when the Tennessee Volunteers take on the Purdue Boilermakers.

In the second game on Thursday's college football bowl game schedule, the Volunteers (7-5, seventh in SEC) opened as college football betting underdogs but have seen the line swing 7.5 points, with the 8-4 Boilermakers (seventh in Big Ten) missing two of their star players.

Here are our best free Tennessee vs. Purdue picks and predictions for the Music City Bowl on Thursday, December 30.

Purdue opened as a 2.5-point favorite, but with George Karlaftis and David Bell opting out of the bowl game to prepare for the NFL Draft, this line flipped to Tennessee -5 as of December 24. The total has soared, opening at an already lofty 58.5 before shooting up to 64.

If you're signing up for a new sportsbook for the Music City Bowl, here are two of the best welcome bonuses available:

The Boilermakers are 20-8 ATS in their last 28 games as an underdog. Find more NCAA betting trends for Tennessee vs. Purdue.

Tennessee vs Purdue picks and predictions

The Tennessee Volunteers showed promise in their first season under new head coach Josh Heupel, going 7-5 straight up. The former Heisman Trophy runner-up was the man behind UCF's recent success, and he brought that same offensive mindset to Rocky Top, with the Vols finishing 15th in the country with 459 yards per game. The attack was balanced, with Tennessee ranking 19th in the nation with 212 rushing yards per game while Hendon Hooker took over the starting quarterback job in Week 2 and went on to complete 69 percent of his passes for 2,567 yards and 26 touchdowns against just three interceptions.

That's bad news as they get ready for an explosive Purdue offense led by quarterback Aidan O'Connell, who completed 73.5 percent of his passes and averaged 288.9 passing yards per game. The Boilermakers were also tough defensively, where they limited foes to just 20.5 points per game, good for 19th-best in the nation.

Purdue really put together a nice campaign on both sides of the ball this year, going 8-4 SU (7-5 ATS). So, it's little surprise that they opened as a favorite despite this practically being a home game for the Vols, who will get plenty of support in Nashville.

However, the line flipped once Purdue defensive end George Karlaftis and wide receiver David Bell opted out to focus on the NFL draft. Both guys were first-team All-Big Ten selections and will likely go very high in the draft, and their absence will be felt on both offense and defense.

That 7.5-point swing might be a bit disrespectful to the rest of this Purdue team and might also be giving the Vols a tad too much credit. As we saw in Florida's loss in the Gasparilla Bowl, don't be too quick to overrate a school just because they play in the SEC.

The Vols lost to that same Gators squad by 24 points and frankly, none of their victories this season were impressive. They picked up three easy wins over small programs like South Alabama, Bowling Green, and Tennessee Tech. They also smashed a Vanderbilt program that has just one conference win in the last three years, while defeating South Carolina and Mizzou, who finished with .500 records. The Vols’ only win against a quality opponent came in Week 10 against Kentucky, but considering that they surrendered 35 first downs, 612 yards, and 42 points to the Wildcats in that contest, we're a bit skeptical of just how good they are.

Bell and Karlaftis are great players, no doubt, but are they important enough to justify shiting this line by more than a touchdown? I don't think so, especially when you consider Purdue's depth and the fact that they still have O'Connell slinging the ball against a vulnerable Tennessee defense. Take the Boilermakers with the points.

Any value in betting the Over disappeared in a heartbeat when this line shot up from 58.5 to 64, but if we have to wager on the total, we're still leaning towards the Over. Keep in mind that the Over has cashed in seven of Tennessee's last eight games and six of those contests saw at least 65 total points scored.

Meanwhile, the Boilermakers have scored over 30 points in four straight games, averaging 36.8 ppg over that span. And their normally-stout defense will take a step back without Karlaftis, whose sack numbers don't do justice to the sheer amount of pressure he brings off the edge.

This one is a bit of an obvious choice, given that we're backing Purdue ATS and taking the Over. We think the Boilermakers will continue to have offensive success despite the absence of Bell.

After all, O'Connell is an absolute stud and does a good job of spreading the ball around. And if you think his season stats may have been inflated by inferior competition, think again. O'Connell totaled 1,316 passing yards and nine touchdowns without a single interception against Ohio State, Michigan State, and Iowa.

The Vols have some decent athletes and speed on the defensive side of the ball, but they simply aren't very good. They rank outside the Top-100 schools in the nation in opponent third-down conversion percent and have gotten picked apart by potent offenses, surrendering more than 30 points in six games this year. Take the Over on Purdue's team total. 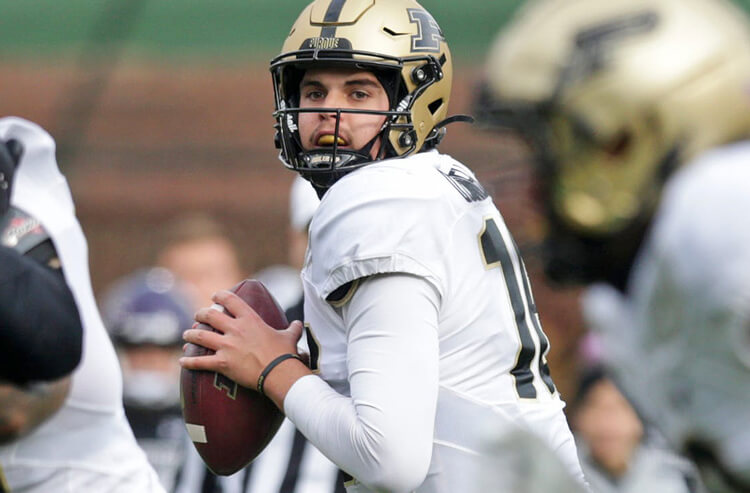 Tennessee vs Purdue Music City Bowl Odds, Picks and Predictions: Purdue Grooves to Its Own Tune
Provided by