We've got a clash of the Carolinas in the Duke's Mayo Bowl, as the North Carolina Tar Heels meet the South Carolina Gamecocks in Charlotte. One thing is a lock, and that's plenty of points — read our college football betting picks for more.

It’s the battle between the Carolinas, with the North Carolina Tar Heels set to take on the South Carolina Gamecocks in the Duke’s Mayo Bowl in the first game on Thursday's college football bowl game schedule.

It was a bit of a down year for the North Carolina Tar Heels. After early projections suggested North Carolina could win the ACC, the Tar Heels went 6-6 and barely became bowl eligible.

Meanwhile, South Carolina went 6-6 on the year thanks to a shocking win against Auburn in late November. Still, the Gamecocks have had quarterback problems all year and that figures to continue into this game.

Here are our picks and predictions for the Duke’s Mayo Bowl on December 30, at 11:30 a.m. ET between the North Carolina Tar Heels and the South Carolina Gamecocks.

The North Carolina Tar Heels opened as a 5-point favorite and have been bet up to -9.5 at some outlets. Meanwhile, the total hasn’t moved since opening at 58.5. However, you can find a 59 at a couple of outlets.

If you're signing up for a new sportsbook for the Duke's Mayo Bowl, here are two of the best welcome bonuses available:

The Over is 4-0 in the Gamecocks' last four neutral site games as an underdog of 3.5-10.0. Find more NCAA betting trends for North Carolina vs. South Carolina.

If you like offense, you’ll like watching North Carolina. The Tar Heels averaged nearly 480 yards of offense per game with nearly 220 yards rushing. However, defensively, North Carolina gave up 408.1 yards per game.

The main question here is whether or not South Carolina can score points and keep up with North Carolina.

The Gamecocks only averaged 21.3 points per game while gaining just 320.4 yards per game. That’s a 150-yard difference between the two teams on offense.

South Carolina has gone through three quarterbacks this season with Luke Doty and Zeb Noland injured throughout the season. It looks as though Noland will get another shot at starting this game, but against Clemson, Noland went 11-for-22 for 96 yards.

While North Carolina does have a secondary that is beatable, South Carolina likes to run the football, and the reality is the Tar Heels have been much better against the run and clinching tackles this season in comparison to their pass defense.

On the other hand, South Carolina is dominant in the passing game defensively. The Gamecocks are massive, using their front seven to create pressure. The secondary is also extremely solid, part of why the Gamecocks allowed just 178.8 yards per game in the air.

However, once North Carolina gets the run game going, the passing game will open up for Sam Howell, who finished the season with 23 passing touchdowns and 11 more on the ground.

You’re not getting value with the spread anymore. North Carolina could’ve been bought for -5 and now it’s at -9. So, if you’re really looking for value in this game, unless you like South Carolina, you’re going to want to bet the total.

South Carolina, despite having a great defense, allowed 24.3 points per game this season. That’s with a great secondary, a terrific pass rush, and everything in between. So, while South Carolina looks really good defensively, a team like North Carolina can figure out ways to score.

The Tar Heels scored against teams like North Carolina State, and also found a way to score 34 against Notre Dame. I don’t think North Carolina struggles to score at least five touchdowns in this game.

In North Carolina games, teams are combining to score an average of 68 points. It’s no coincidence. The offense moves fast and scores fast while the defense struggles to defend.

Did you know that if you parlayed our North Carolina vs. South Carolina picks, you could win $26.45 on a $10 bet? 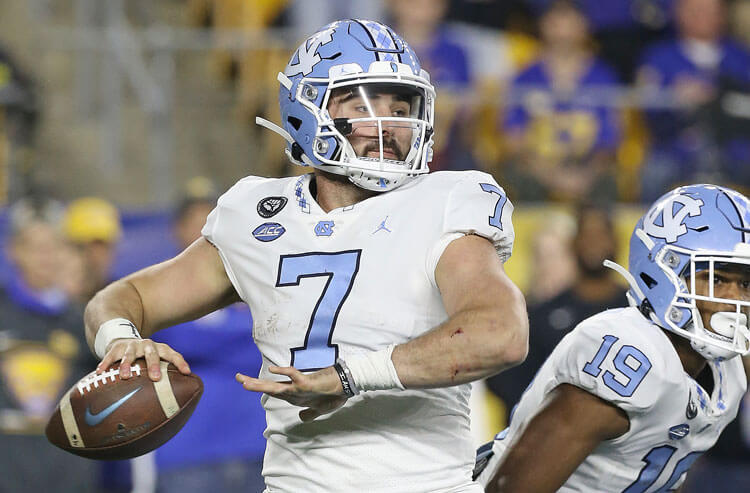