The Washington State Cougars and Central Michigan Chippewas come together in a repackaged Sun Bowl after their initial games were derailed by COVID. With both offenses riding high, we focus on the game hitting the Over in our betting picks for Friday.

The Sun Bowl will be played after all after both teams lost their opponent this bowl season. Central Michigan was originally scheduled to face Boise State in the Arizona Bowl but will now fill in for Miami in the Sun Bowl against Washington State on Friday.

The Chippewas will be the first MAC team to play in the Sun Bowl since 1962 and get a chance to knock off a PAC-12 opponent on New Year’s Eve. Which team will come out on top in this impromptu bowl matchup?

Check out our free college football betting picks and predictions for the Sun Bowl between the Central Michigan Chippewas and the Washington State Cougars on December 31 to find out.

If you're signing up for a new sportsbook for the Tony the Tiger Sun Bowl, here are two of the best welcome bonuses available:

The Chippewas are 4-0 against the spread in their last 4 games overall. Find more NCAA betting trends for Washington State vs. Central Michigan.

After all the drama occurring off the field due to both teams’ original matchups falling victim to COVID cancellations, let’s focus on the product on the field. The Washington State Cougars fought through adversity following the ousting of head coach Nick Rolovich for failing to meet Washington State’s vaccine mandate. Interim coach Jake Dickert performed so well at the helm that he was given the full-time position following the conclusion of the regular season.

The Cougars have been undervalued in the betting market due to the extenuating circumstances off the field, finishing 8-4 ATS. Quarterback Jayden de Laura came into his own by the end of the regular season and should take advantage of a Central Michigan passing defense that ranks 114th in the country. If the Chippewas struggled to contain passing offenses in the MAC, they could really be up against it here against a capable Cougars passing attack.

Washington State gained momentum as the season went on and finished with three wins in its final four games. The Chippewas, however, finished the season even hotter, winning four straight games by double digits to end the season.

After being undervalued for most of the season, the Cougars now laying a full touchdown despite playing a red-hot Central Michigan team that has won six of seven. Washington State allowed 4.7 yards per rush on the season, so this Central Michigan running game should find enough room to get comfortable. Add in the fact that Washington State’s two leading rushers (Max Borghi, Deon McIntosh) will be out for this game, and the Chippewas have a chance to win this game outright.

There’s a strong possibility we see fireworks in this contest. The Chippewas finished with a top-20 offense thanks to a balanced attack. Quarterback Daniel Richardson has performed admirably since being inserted into the starting lineup and has a trio of dangerous receivers (Kalil Pimpleton, JaCorey Sullivan, Dallas Dixon) that will keep Washington State honest. Running back Lew Nichols III finished the season as the hottest rusher in the country, ultimately accumulating over 2,000 yards from scrimmage while finding the end zone 17 times.

Washington State should be able to find the end zone as well. The Chippewas struggled to defend the pass against a soft schedule and will face a step-up in competition. De Laura averaged 8.1 yards per attempt and will be able to find Travell Harris (955 yards, 7 TDs) and Calvin Jackson Jr. (801 yards, 9 TDs) in mismatches all game long.

Both teams enter this game on a hot streak and should be able to put up points on the scoreboard. We feel most strongly about the Over and will roll with that as our best bet. Both offenses should be able to find success through the air and on the ground, and this makeshift, last-second matchup has all the feeling of a high-scoring affair.

Did you know that if you parlayed our Washington State vs. Central Michigan picks, you could win $26.45 on a $10 bet? 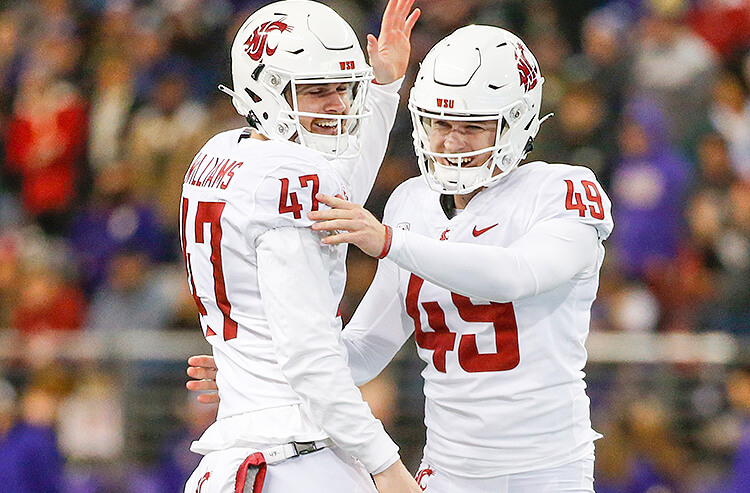