Boise State enjoyed a stellar defense all season and will be a brutal test for Central Michigan, while the Chippewas' defense is likely to be overwhelmed by the Broncos' offense. Read more in our college football betting picks and predictions.

On Friday, December 31, the Boise State Broncos and Central Michigan Chippewas meet in the Arizona Bowl in Tucson. This isn’t quite as big as some of the other games on Friday's college football bowl game schedule, but that doesn’t mean it’ll be any less exciting.

Will the Broncos cap off an up-and-down season with a win over a red-hot Chippewas team? Our Boise State vs. Central Michigan picks and predictions have you covered with the answer.

Editor's note: This game was canceled on Dec. 27, as Central Michigan withdrew to participate in the Sun Bowl.

Central Michigan, which was already in Tucson, has been released from Arizona Bowl & will play Washington State in Sun Bowl at noon ET Friday in El Paso sources told @ActionNetworkHQ. Arizona is 4th bowl canceled because of COVID issues along w/Hawaii, Fenway & Military

The Chippewas were getting 10 points when this game first hit betting markets, but they’re now getting as little as 7.5 points and as many as 8.5. The total, meanwhile, has gone up from 52 to 55.5 in some places. However, it can still be found at 54.5 or 55.

If you're signing up for a new sportsbook for the Arizona Bowl, here are two of the best welcome bonuses available:

Boise State is 5-0 against the spread in its last five games following a straight up loss. Find more NCAA betting trends for Central Michigan vs. Boise State.

The Broncos have the 12th-best scoring defense in college football, as they’re giving up only 19.0 points per game this year. This Boise State defense is arguably the best group that Central Michigan’s explosive offense has faced all year, making this an interesting clash of styles in the desert. However, in the end, it’s hard to imagine the Broncos not coming out on top.

Central Michigan’s strength on offense is in the passing game, where Daniel Richardson leads a unit that was 25th in the nation in passing yards per game at 270.1. The Broncos, however, have a very good passing defense, as they are allowing only 206.9 yards per game through the air this year. With that in mind, Boise State should make enough plays on passing situations to get this team off the field. It won’t be a flawless defensive performance, but the Broncos will get the stops they need to keep the Chippewas out of striking range.

Offensively, Hank Bachmeier should be able to throw all over a Central Michigan defense that allowed 262.8 yards per game through the air this season. Bachmeier had a solid season for Boise State this year, but he didn’t exactly live up to expectations. Look for him to end his junior year on a positive note by turning in a huge game against a lousy passing defense, giving him all the momentum in the world heading into his senior year. Central Michigan is not going to have a match for Khalil Shakir, who had 77 receptions for 1,117 yards and seven touchdowns this season.

Boise State has gone Under the total in each of its last seven games, and the Under has also cashed in nine of its last 10. The Broncos have, however, been scoring a decent amount of points on their own recently, as they are averaging 28.8 points per game over their last five. Meanwhile, the Chippewas have gone Over the total in three of their last five games, and they’re averaging 40.4 points per game in that span.

The Broncos are fully capable of turning it up offensively when they need to, and that’s likely how this one will end up playing out. The Chippewas should score a solid number of points in this game. It just won’t be enough to match the Broncos.

Since Jim McElwain became the head coach at Central Michigan, the Over is 11-5 when his team has played as an underdog. It’s also 4-1 when the team is coming off back-to-back Unders in that span. Overall, McElwain is a guy that focuses more on the offensive side of the ball, which means his teams are going to put up a lot of points at the expense of giving some up. The problem is that things can get out of hand when the Chippewas face better teams, and that’s exactly what’s happening here.

While this Boise State team has played in quite a few low-scoring games this year, the group has also been involved in some shootouts. Boise State and UCF combined to score 67 points in the first week of the year, and the Broncos also put up 54 points against UTEP the following week. Then, there was also a 31-41 loss to Nevada on October 2. This isn’t Boise State’s preferred style of play, but this group will be ready to put up some points.

Did you know that if you parlayed our Central Michigan vs. Boise State picks, you could win $25.69 on a $10 bet? 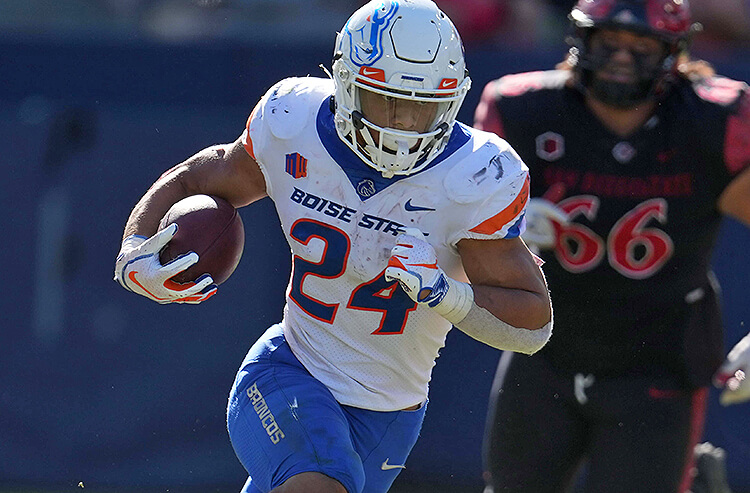