Syracuse vs Louisville picks and predictions for November 20

Year 2 of the Scott Satterfield era at Louisville was supposed to build on the turnaround witnessed in 2019, but that just hasn’t been the case.

Injuries, turnovers, and inconsistent QB play have held the Cardinals back in 2020, and now star running back Javian Hawkins has opted out for the remainder of the season to focus on the NFL Draft. All that said, Louisville is still an 18-point favorite for when they host the Syracuse Orange Friday night.

Can the Cards cover the big number? Let’s take a look at our best college football predictions for Louisville vs. Syracuse, with kickoff scheduled for Friday, November 20 at 7:00 p.m. ET.

It should be a lovely fall night for football in Louisville. The forecast is calling for partly cloudy skies, temperatures in the mid-50s and minimal wind. Be sure to monitor the gametime conditions with our NCAA football weather info.

The Over is 7-0 in the last seven games where Louisville was the favorite and 4-1 in the last five games against Syracuse. Find more NCAA betting trends for Syracuse vs. Louisville.

Right away, this line seems odd. While Syracuse is one of the worst teams in the country, they are likely not 18 points worse than a two-win Louisville team that just lost its best playmaker.

Louisville may also be without top wide receiver Tutu Atwell. That means QB Malik Cunningham may be the lone head remaining of the Cardinals' three-headed monster that started the season. But without Atwell, the passing game has been inconsistent, and Cunningham has thrown four interceptions in the past two weeks and nine for the year.

Meanwhile, the Louisville defense has been shaky all season long, particularly against the run, where they allow nearly 200 yards per game and give up nearly 30 points per contest.

On the other side, Syracuse is hoping they’ve found its quarterback of the future in JaCobian Morgan. The freshman has looked solid in his first game-plus of action and nearly led the Orange to an upset win over Boston College two weeks ago.

Morgan should have time in the pocket in this game, even if his line is sub-par, as Louisville has one of the worst pass rushes in the country.

So, to recap, Louisville will be without its star running back for sure, and could be without its best wideout as well. And as bad as Syracuse is, asking the Cardinals to cover a spread this large might be a little too much, particularly with the Orange being well-rested coming off a bye.

As mentioned, the game is trending towards the Over and even with two offenses going through issues, it's not hard to like the trend continuing with a total of 56.5. First and foremost, these defenses combine to allow 60.1 points per game, and don’t look like they’ll be making any improvements any time soon.

Syracuse has one of the worst rush defenses in the country, allowing over 220 yards per game on the ground. Cunningham ran wild for 197 yards in Louisville’s 31-17 loss at Virginia last week. He will likely be asked to shoulder the load once again and is more than capable of taking over this game with his cleats.

Louisville’s defense is more vulnerable to the run as well. Look for the Orange to give the Cards a heavy dose of running back Sean Tucker, who is averaging 5.0 yards per carry this season. And while Louisville doesn’t give up a ton of yards per game through the air, that’s mostly because teams haven’t had to throw on the Cards. If Morgan can pick his spots in the passing game, Syracuse will be able to put up points.

With that said, taking Syracuse to go Over their team total of 18.5 in this game is looking rather juicy. The Orange already average 18.3 points per game, and the Cardinals will be one of the worst defenses they face all year. Morgan has also clearly given Syracuse a bit of life under center, so being average with an extra week of practice should be a safe bet here.

Did you know that if you parlayed today’s NCAA Syracuse vs. Louisville picks, you could win $58.14 on a $10 bet? 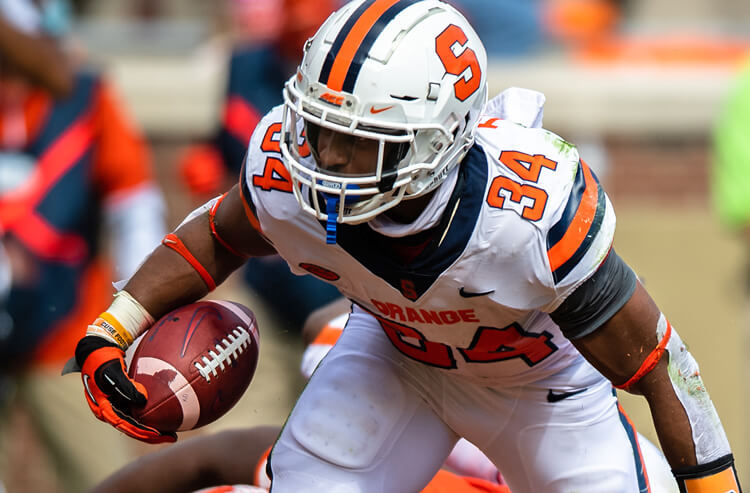 Syracuse vs Louisville picks and predictions for November 20
Provided by