The Crimson Tide have been rolling all season long, heading into the Rose Bowl at 11-0 SU and 8-3 ATS against some monster spreads.

The Alabama Death Machine rolls into the College Football Playoff in a matchup traditionalists will love, as the Crimson Tide take on the Notre Dame Fighting Irish in the Rose Bowl.

Unfortunately, we lose some of that tradition this year as the game has been moved to AT&T Stadium in Arlington due to COVID restrictions. Despite the change in scenery, the intensity of this game will be high. Can the Irish upset the Tide as 20-point underdogs, or will Bama roll into the College Football Playoff National Championship for the fifth time in six seasons?

Here’s a look at our best college football free picks and predictions for the Rose Bowl between No. 4 Notre Dame No. 1 Alabama. Kickoff is scheduled for Friday, January 1 at 4:00 ET.

Unfortunately, the Rose Bowl will be played indoors at AT&T Stadium in Arlington, Texas. and not in the beautiful hills of Pasadena. Be sure to monitor the gametime conditions with our NCAA football weather info.

Alabama enters this college football junkie’s dream matchup at 11-0 SU and 8-3 ATS, trampling most opponents and spreads along the way. The Crimson Tide were given a bit of a scare in the SEC Championship by Florida, but controlled most of the game. Unfortunately for Bama backers, the Tide failed to cover the spread for the first time in over two months, and if they want to get back in the ATS win column they’ll need to cover another big number in this one.

Alabama is laying 20 points against Notre Dame, and for good reason. The Tide have a next-level offense led by their two Heisman finalists – quarterback Mac Jones and wide receiver DeVonta Smith. Jones has thrown for 3,739 yards with 32 touchdowns compared to just four interceptions, with Smith hauling in 98 of those passes for 1,511 yards and 17 scores.

Jones also has plenty of support. Even with Jaylen Waddle going down to injury, Bama has one of the best receiving corps in the country, and two All-Americans on the offensive line. Oh, and when Jones wants, he can also hand the ball off to one of the best running backs in the country in Najee Harris. So, it should be no surprise Alabama racks up over 540 yards and nearly 50 points per game.

They will certainly be a hand full for Notre Dame. The Fighting Irish were riding high heading into the ACC Championship Game, undefeated at 10-0, ranked No. 2 in the CFP rankings, and already with a win over Clemson. But Trevor Lawrence didn’t play in that regular-season meeting, and boy, did he make a difference in the title game.

The Irish were thumped by Clemson 34-10 in a game that wasn’t as close as the final score indicates. In fact, it was so rough that some were questioning whether Notre Dame had played itself out of the Playoffs.

If Notre Dame has any shot at the upset, the defense will have to play much better than it did in the ACC Championship and quarterback Ian Book will need to play the game of his life. Book just doesn’t have the playmakers needed on the outside, in a season that saw him throw for just 2,600 yards and 15 touchdowns. Alabama will key on Book, and if the Irish get down early like they did against Clemson, they won’t have the firepower to come back. They are also just 5-6 ATS this season. Roll Tide.

The total for the Rose Bowl hit the board at 65.5 and it has seen little movement since, and whether or not you like the Over in this game depends on whether you think Notre Dame will be able to do its part and put up some points on this Alabama defense.

The Crimson Tide defense was cruising for a while, allowing a total of 77 points in the seven games prior to the SEC Championship game, where Florida was able to get to them for 46 points. Yes, if you're going to attack the Bama defense, the best way to do so is through the air, but the Gators owned the country’s best passing offense and had a plethora of weapons to spread out the Tide secondary. Notre Dame does not have that type of offense. The Irish do best running the football, and that plays into Alabama’s strengths.

Meanwhile, we can’t sell Notre Dame’s defense short. This is a strong group that just got outplayed by arguably the best football player in the country. and managed to hold him and Clemson to 34 points. Alabama’s offense is better, but this defense should put up a fight and will keep the Tide a touchdown or so below their season average. Put it this way, 45-20 still sneaks below the number.

Alabama has been a great first-half bet all season long, because no one in college football gets off to better starts than the Crimson Tide. Alabama’s 29.6 first-half points per game were the best in the country, while at the same time allowing just 50 first-half points over its last seven games, cashing the first-half spread in each of those contests. And we just saw what happened to Notre Dame in the opening half against Clemson. Don’t tempt fate here. 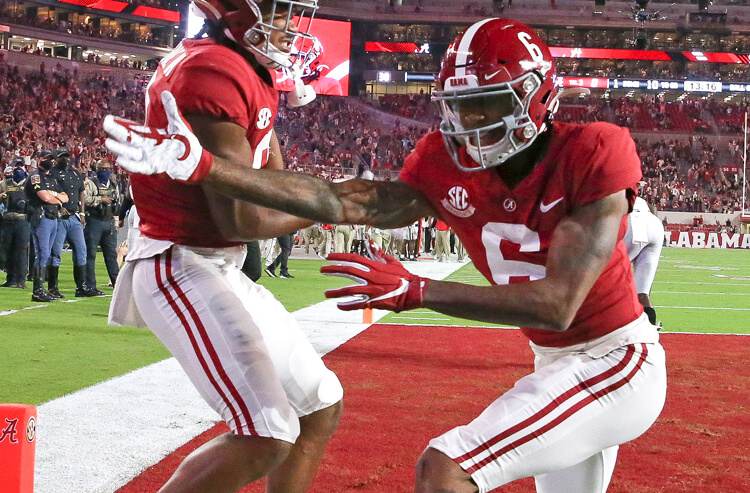