Stanford vs California Picks and Predictions for November 27

Thanksgiving week rivalry games are supposed to provide all of the pageantry and competitiveness that make college football betting so enjoyable and the sport itself so unique.

So, hoo boy, is it tough to see an absolute classic like the matchup between Stanford and Cal come to such a screeching halt. You can’t deny “The Play” and the storied history in this Pac-12 showdown, but both sides will take the field this week sitting at 0-2 and still looking for that elusive first victory of the season.

Here’s a look at our best college football free picks and predictions for Stanford at Cal, with kickoff scheduled for Friday, November 27 at 4:30 ET in Berkeley, California.

At the very least, we get a nice day for football on Friday. You can expect a high of 63 degrees with wind out of the north-northeast at 9 mph. There is no rain in the forecast. Be sure to monitor the gametime conditions with our NCAA football weather info.

The Golden Bears are 1-6 ATS in their last seven home games. Find more NCAA betting trends for Stanford vs. California.

Geez, where to begin with this blockbuster. Let’s start with the Cardinal, which didn’t play last week because their game against Washington State was canceled. David Shaw’s trademark running game hasn’t quite surfaced this season as two weeks ago, in Stanford’s 35-32 loss to Colorado, the team’s leading rusher was quarterback Davis Mills, who put up a paltry 36 yards on the ground. However, he was effective in the air, throwing for 327 yards and a score.

Cal is coming off a 31-27 loss at the hands of Oregon State and showed more of a balanced attack on offense. Chase Garbers went 28-42 for 315 yards, three touchdowns and two interceptions while Marcel Dancy chipped in on the ground with 75 yards rushing. The Bears defense has shown some signs of life, picking off three passes in two games, which is a rare bright spot for a winless team.

It’s hard enough to pick rivalry games, but it becomes even more of a challenge when both teams are so bad. While early betting has made Cal a slightly heavier favorite, I’ll give Stanford the benefit of the doubt with a bit of extra time to prepare, especially with the road team being 4-0 ATS in the last four meetings. You can hear the confidence oozing from my turkey-filled arteries.

While each defense is giving up more than 30 points a contest, I’m not confident that either of these offenses are dynamic enough to hit the Over. The Under has hit four of the last six times in this series, and I’m willing to bet that a few turnovers ensure we see a battle that is lower-scoring than expected.

Garber is a quarterback who will make plays for both teams. He’s already been shaky thus far, and a mistake or two is all it will take for Stanford to capitalize and for Cal’s team total to hit the Under.

If it helps, I also spent much of my research on this game being distracted by a delicious pecan pie, and it will likely be better than the game itself.

Did you know that if you parlayed today’s NCAA Stanford vs. California picks, you could win $56.82 on a $10 bet? 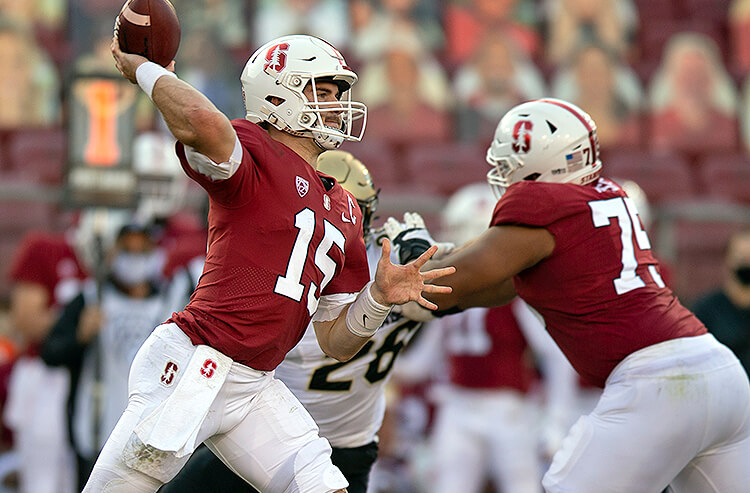 Stanford vs California Picks and Predictions for November 27
Provided by