Navy has looked competent each of the last two weeks, a reversal from its early-season struggles, just in time to face backsliding Memphis. Find out if the Midshipmen can keep the good form going with our college football betting picks.

The Midshipmen started the year with historically bad offensive performances, leading to some off-field drama between the Navy administration and the coaching staff. That tumult may have been exactly the spark the offense needed, as the Midshipmen have won ATS in each of their last three games while scoring 74 combined points in them, compared to 10 total points in their first two games.

Memphis has seen any AAC title hopes go up in smoke after turning a 3-0 start into a 3-3 midseason record. The Tigers must now strive for mere bowl eligibility.

Here are our free college football picks and predictions for Navy at Memphis on October 14, with kickoff set for 7:30 ET.

Despite Navy’s recent successes, this line rose quickly from opening at Memphis by 8.0 all the way to 10.5 by Monday afternoon, never hesitating to cross that key number. The total rose just as quickly, opening at 52.5 on Sunday, reaching 55.5 on Monday and even touching 56.5 on Wednesday before settling back down at 55.5 points.

One of the shifts to Navy’s season came via the simple fact that it began facing conference opponents, going 3-0 ATS against them in the last week to add to a 16-5 ATS stretch dating back into the 2018 season. To fit right with that, Memphis is 1-7 ATS in its last eight conference games, including the last two weeks. The Over has hit in six of Navy’s last seven games as a road underdog, as well as in the Tigers’ last five Thursday night tilts. Find more NCAA betting trends for Navy vs. Memphis.

Going against such aggressive line movement may feel risky, but as soon as this number crossed 10, the Midshipmen became the right bet. Routing a triple-option team is simply too difficult to assume a two-possession win, especially after that offense has found its groove, as Navy’s appears to have the last few weeks.

Before the controversy over the Midshipmen’s athletic director firing offensive coordinator Ivin Jaspar against head coach Ken Niumatalolo’s wishes, the triple-option offense gained all of 68 total yards against academy rival Air Force. Chet Gladchuk’s frustration held merit, even if his overreach did not.

Since Niumatalolo prevailed upon Gladchuk to bring back Jaspar as the quarterbacks coach with Niumatalolo calling the plays, the offense has averaged 315.7 yards per game, not necessarily a transcendent number, but one suggesting encouragement, particularly as it averages 4.7 yards per play.

The raw statistics suggest that running approach may not work against Memphis, but the Tigers’ supposedly stout run defense built its reputation against FCS-level Nicholls State, hapless Arkansas State, and pass-happy Mississippi State. In its last three games, Memphis has given up 199 rushing yards per game on 4.23 yards per attempt. Uncoincidentally, the Tigers lost all three games.

Taking the Over 55.5 requires some faith in Memphis to score and score quickly, given the deliberate pace of the triple-option. Taking the Navy team total Over simply requires faith that the Tigers’ run defense is as paltry as it has shown itself to be throughout the last month.

Some locations already have this up to 22.5, but as long as catching it before it exceeds 23, no key value is lost.

This will be a bit of a scoring burst for the Midshipmen, given they have broken 21 points in only three of their last 10, but two of those successes came in the last two weeks, with the week before that a 20-point effort.

Navy has not fixed its offense entirely just yet, but it may not have needed to in order to put up points at Memphis. 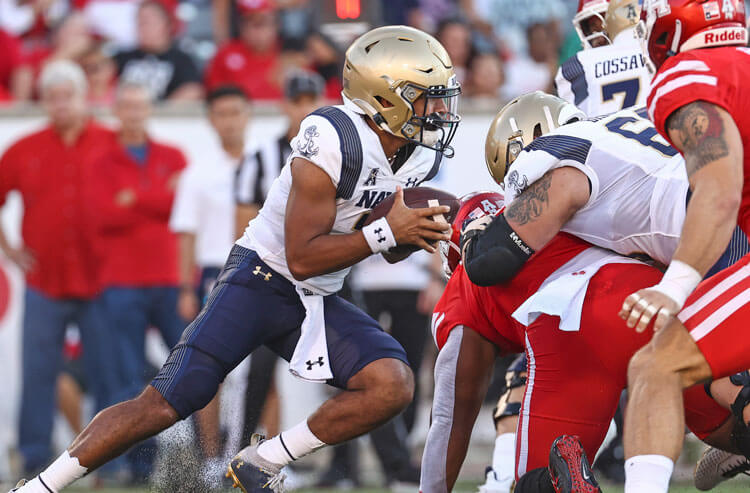 Navy vs Memphis Picks and Predictions: Midshipmen Stay Afloat Against Tigers
Provided by

Oklahoma vs Kansas Picks and Predictions: How Many Points Is Too Many Points?
Zachary Cohen | Oct 22, 2021