California vs Oregon Picks and Predictions: Will The Ducks Suffer Another Letdown?

It's been a rough year for Cal but it has shined as a road pup, going 11-1 ATS in its last 12 games in that scenario. The Bears are getting almost two TDs against a wounded Ducks squad Friday, and our college football picks like Cal to cover once again.

The Pac-12 has been a very difficult conference to predict in 2021 with upsets aplenty. With the only two unbeaten teams in conference play (Arizona State, Utah) residing in the South Division, there’s still hope for Pac-12 North teams to run the table and wind up in the conference championship game.

Oregon looks to shake off its first loss of the season — an upset at the hands of Stanford — as it hosts California in Autzen Stadium on Friday night. Will the Ducks come in refreshed and prepared after the bye week, or will the Golden Bears continue their covering ways as college football betting road underdogs?

Find out the answer to that question and more by reading our picks and predictions for California vs. Oregon on Friday, October 15.

This line opened Oregon -15 but has been bet down to -13.5 as of the time of this writing. Use the live odds widget above to track any future line movements right up until kickoff and be sure to check out the full college football odds before placing your bets.

The Golden Bears are 11-1 ATS in their last 12 games as a road underdog. Find more NCAA betting trends for California vs. Oregon.

Two weeks ago, the Oregon Ducks were sitting at 4-0 with a win over Ohio State already on the resume and looking to keep building momentum for a potential College Football Playoff bid. And what did they do?

It was an underwhelming performance all around from the Ducks, which exposed their weaknesses that we say in their narrow win over Fresno State and their victory over winless Arizona in which they struggled to pull away until the fourth quarter.

They’ll be shorthanded in this matchup as running back CJ Verdell and defensive back Bennett Williams were recently lost for the season and star edge rusher Kayvon Thibodeaux will miss the first half after being called for targeting late in the Stanford game.

Oregon has struggled to cover the spread as a favorite, going 0-7 ATS in its last seven games when laying points. Plus it’s hard to trust them to cover multiple scores when the passing game remains subpar: Pro Football Focus has Anthony Brown as the lowest-rated Pac-12 quarterback this season and fans have already started to question whether or not it’s time for a change under center — four-star freshman Ty Thompson awaits.

On the other side, the Golden Bears have been extremely profitable in this situation, going 11-1 ATS in their last 12 games as a road dog. While there are few positives to point to thus far in 2021, they are typically a defensively-minded group under coach Justin Wilcox and they’ll look to improve on an 81st-ranked defense following a bye week to prepare.

Cal is most vulnerable in the secondary, but Oregon isn’t best positioned to exploit that given Brown’s struggles. It’s also difficult to expect Oregon’s offense to be at its peak given that offensive coordinator Joe Moorhead missed the Stanford game due to surgery and his status for this game remains uncertain.

We’ll take the points with the Bears given how profitable they’ve been as road underdogs and the sheer amount of negative factors in Oregon's corner at this point in time.

As alluded to above, Oregon’s offense is experiencing some difficulties with quarterback Anthony Brown struggling, running back CJ Verdell out for the year, and offensive coordinator Joe Moorhead away from the team for a period of time dealing with a medical issue. It’s difficult to expect the Ducks to be firing on all cylinders, especially against a Cal team that held them to exactly 17 points in each of the last two meetings between these schools.

These two teams have also trended toward the Under when playing in Eugene, where the Under is 9-1 in the last 10 meetings.

Oregon defensive coordinator Tim DeRuyter should have familiarity with Cal given that he spent the prior four seasons with the Golden Bears. It’s not like Cal has been lighting the world on fire offensively either, averaging just 19.8 points per game — against FBS competition.

Oregon really seems to have dialed the playbook down to cope with Brown’s limitations as a passer. It's facing multiple injuries and may opt to slow the game down and limit possessions given that it is the superior team on paper.

There are enough signs pointing toward the Under, so that’s what we’ll play. 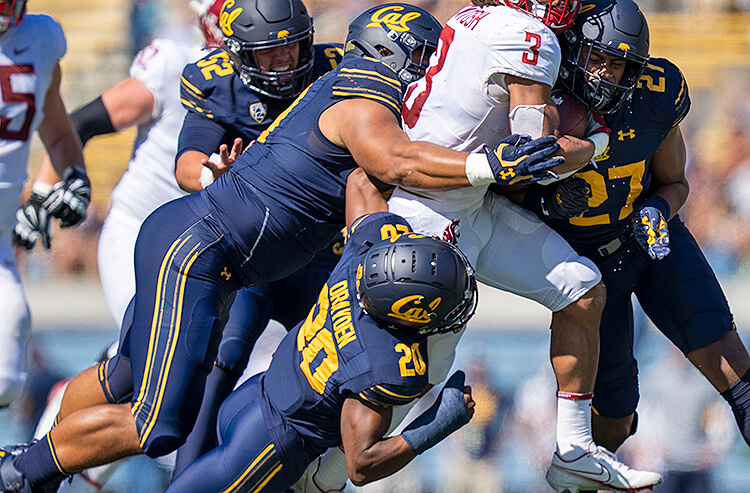 California vs Oregon Picks and Predictions: Will The Ducks Suffer Another Letdown?
Provided by