After a shocking SEC Championship game result, Alabama jumps the board to the No. 1 spot - with Georgia falling as a result. See where everyone stands heading into bowl season in our latest power rankings update.

Check back each week for Andrew Caley’s updated power rankings, where he lists his Top 25 teams in college football, highlighting the risers, fallers, and maybe identifying some betting value in the futures market.

The regular season is over, and the College Football Playoff is set. Cincinnati makes history by becoming the first Group of Five team to make the field, but it was Alabama with the most impressive performance of championship week, dominating former No. 1 Georgia in the SEC Championship. So be prepared for a shakeup heading into bowl season.

Compare updated national championship futures before betting to ensure you get the best number.

The Cincinnati Bearcats made history Sunday by becoming the first Group of Five program to qualify for the College Football Playoff. The Bearcats capped off their regular season with a 35-20 win in the AAC Championship Game over the No. 20 ranked Houston Cougars, covering as 10.5-point favorites.

The resounding win over a ranked opponent for a conference title sealed the deal for the Bearcats and was enough to convince the CFP committee that they belonged in the Playoff field following their perfect season, which included a victory at No. 5 Notre Dame.

Now, the true test begins as Cincinnati matches up against No. 1 Alabama in the Cotton Bowl on New Year’s Eve. The Bearcats are getting plenty of respect from books at +13.5 considering the Crimson Tide were 18.5-20.5-point favorites against the likes of Texas A&M, Arkansas and, Auburn.

It was a tough year for the Pac-12 as Utah ended up as the top-ranked team by the CFP committee sitting at No. 11. But that feels a little disrespectful to the Utes after completely dominating a former Top 4 team in the Oregon Ducks, twice in the last three weeks, including in the Pac-12 title game.

Utah will get a chance to prove it’s being undervalued when it takes on the Ohio Buckeyes in this year’s Rose Bowl. The Utes are 6.5-point underdogs for the matchup against the Buckeyes and they are exactly the type of team that has given Ohio State problems. Physical teams that can run the ball and play defense, like Oregon and Michigan.

But what makes Utah dangerous is that quarterback Cam Rising brings them balance. Rising has thrown for 2,279 yards, 18 touchdowns, and five interceptions under center for the Utes, which gives them real value as underdogs in this matchup.

The Georgia Bulldogs looked like the best and most dominant team in college football all season long. But a date with the Alabama Crimson Tide changed everything in an instant.

Heisman favorite Bryce Young picked apart the vaunted Bulldogs defense, throwing for 421 yards with three touchdowns and no picks, in a game that ended up not being all that close, as Bama blew out Georgia 41-24 as 6.5-point underdogs.

But the Bulldogs will get a shot at redemption as they will take on the Michigan Wolverines in the Orange Bowl in one of the College Football Playoff semifinals. Georgia is favored by 7.5-points, but we’ve been here before. 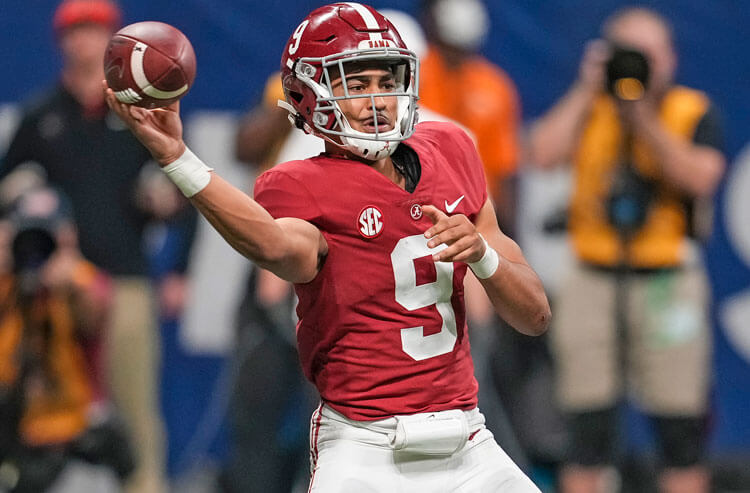