Wizards vs Warriors Picks: Time to Get Cooking

Steph Curry put on a masterclass in Golden State's previous game, a 41-point explosion against the Bucks.

Two teams on the edge of the play-in picture in their respective conference will face off on Friday night, with the Washington Wizards heading west to take on the Golden State Warriors.

While Golden State seems the more likely team to actually get into the play-in tournament, Washington can't be counted out in the Eastern Conference, if only due to the lack of talent beyond the top teams.

Here are our best free NBA betting picks and predictions for Wizards vs. Warriors at 10:00 p.m. ET on April 9.

Golden State bounced between -4.5 and -5 a couple of times since opening at the former number Thursday night at DraftKings, and as of 7:30 p.m. ET, the line is -5. The Warriors are getting just 54 percent of spread tickets, but they're seeing 75 percent of spread money. The total opened at 239, peaked early at 241, receded to 238.5 midmorning today and moved up to 240.5, with 72 percent of tickets on the Under, but money running almost dead even.

The Under is 4-0 in the Wizards' last four games as an underdog. Find more NBA betting trends for Wizards vs. Warriors.

Despite Russell Westbrook's now-traditional second-half surge, the Wizards have remained wildly mediocre, going 3-7 SU and 5-5 ATS over their last 10. Washington is simply treading water in 2021, nowhere near good enough to make any real noise — with Westbrook taking all too much oxygen away from Bradley Beal's incredible scoring ability — but not bad enough to bottom out, either.

The Wizards have been blown out regularly this season, including recent double-digit losses to the Pistons, Hornets and Knicks. Washington isn't picky — it will passively take Ls from just about any old team.

Any old team is a good way of framing the 2021 Warriors, who have regularly teetered on also-ran status — while diving headfirst into mediocrity when Steph Curry is missing. Luckily for Golden State, Curry's tailbone injury appears to be (ready?) behind him, with the nuclear shooter putting up 41 points in the Warriors' previous game, an impressive one-point win over the Giannis-less Bucks.

While this pick isn't exactly an endorsement of Golden State but rather an indictment of the Wizards, we are completely comfortable going with the favorites as Washington kicks off a four-game West Coast road trip.

The Wiz have been a middle-of-the-road O/U team, sitting at 25-25 on the season. Between a porous defense and two scorers capable of filling up the cup in Westbrook and Beal, it's a bit of a surprise they haven't rewarded Over bettors more often this season. They had, at least with a bit more regularity, before a recent five-game absence from Beal in which they went 1-4 O/U, a part of a 3-7 O/U stretch over their last 10.

While Beal is expected to play in this one after returning in Washington's last game, it isn't a great spot for the Wizards to put up a ton of points. Despite injuries and a lack of talent, Golden State has remained a Top-10 team in defensive rating all season, currently sitting ninth in the NBA.

Beyond Curry, however, the Warriors' offense is inefficient and flat-out unthreatening. With two of the world's best scorers in Beal and Curry in this one, there's always a chance the pair push the number Over. We like the Under a bit more in this spot, however.

It's probably best not to overthink this one. All season long, Golden State has had to depend on Curry like never before. That came to a head in their last game, when Steve Kerr and Golden State went away from their motion-centric offense, running a season-high 71 pick-and-rolls against Milwaukee. The result? A team-high 41 on 14 of 21 shooting for the former unanimous MVP.

Even if we didn't have an indication that Kerr was prepared to unleash Curry in a late-season push for a play-in spot, we would happily take him to top his points total against a dreadful Wizards defense allowing the fifth-highest three-point percentage to opponents in 2021. With the added benefit of knowing Kelly Oubre and Andrew Wiggins shouldn't continue to take shots away from Curry? We're all over this. 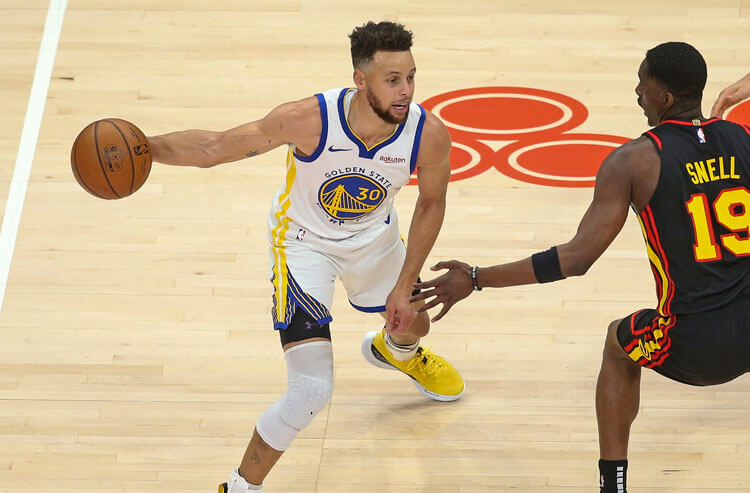 Wizards vs Warriors Picks: Time to Get Cooking
Provided by