Raptors vs Bucks Picks: Fear For the Deer

People are starting to wonder if it’s time to push the panic button on the Milwaukee Bucks. Milwaukee has dropped four games in a row, both straight up and against the spread, as a troubling trend about the Bucks’ record has emerged.

Despite the struggles, oddsmakers have the Bucks as 6.5-point favorites over the same Toronto Raptors who just beat them 124-113 just two days ago.

Will Toronto Fear the Deer, or will Milwaukee’s skid continue? Find out in our NBA free picks and predictions for Raptors vs. Bucks on Tuesday, February 18 with tipoff scheduled for 7:30 p.m. ET.

The Over is 8-0 in the Raptors' last eight road games and 8-2-1 in the Bucks' last 11 games overall. Find more NBA betting trends for Raptors vs. Bucks.

Milwaukee hit the FanDuel odds board as a 6.5-point favoritel and dropped to -5.5 this morning, then rebounded this afternoon to -7, where the number sits as of 4:30 p.m. ET. It's two-way point-spread action, with 55 percent of bets on the Bucks and 52 percent of money on the Raptors. The total is out to 236 from a 234.5 opener, with 70 percent of bets on the Over, but money leaning just slightly toward the Over at 52 percent.

So, right off the bat, here is the trend some Bucks fans may find troubling: Milwaukee is 6-0 straight up against the Cleveland Cavaliers and the Detroit Pistons this season, and just 10-12 against everyone else. That’s not a good sign for a team with NBA Finals aspirations.

While the Bucks continue to hum on offense, leading the NBA in offensive rating, it’s the other end of the floor that has been the problem. Milwaukee was tops in the Association a season ago when it came to defensive rating, now they sit 13th while ranking 21st in scoring defense.

They have particularly struggled to defend the perimeter, where they rank 26th in opponent 3-point shooting percentage. Thursday, they play a Toronto team that jacks up as many shots from downtown as anyone and the Raps went 17-43 (40 percent) from three on Tuesday.

Another key to the Raptors' win on Tuesday was the return of OG Anunoby, who did a great job of guarding Giannis Antetokounmpo and Khris Middleton down the stretch, while also providing another capable shooter on the outside.

That said, keep an eye on the status of Raptors’ point guard Kyle Lowry. The franchise icon tweaked his ankle in Tuesday’s win, causing him to miss most of the second half. If Lowry is good to go, the Raptors are a good bet to keep this one close once again.

While the side is interesting, the total may be the juicer bet in this Eastern Conference matchup. The early action has come in on the Over, and with good reason.

The Raptors’ strength was supposed to be on defense this season, but they’ve been more of a middle-of-the-pack team at that end of the floor, ranking 16th in defensive rating and 15th in scoring defense. And even with Anunoby back, Toronto will still have their hands full with Giannis and the NBA’s No. 1-ranked offense.

Once again, keep an eye on the status of Lowry, who is a big part of the Raps’ offense, but with the Bucks’ struggles on defense, and Jrue Holiday no closer to returning, it’s hard to fade the Over in this spot.

Someone who didn’t enjoy Anunoby’s return was All-star shooting guard Khris Middleton. The Bucks’ sharpshooter was enveloped by Anunoby for most of the game and was limited to just 11 points on eight shots.

But this isn’t new, as the Raptors have done a decent job of guarding Middleton over the years, limiting him to just 14.6 points per game. With Middleton averaging 20.3 points on the season and another tough matchup on deck, we think his points total is a touch too high. 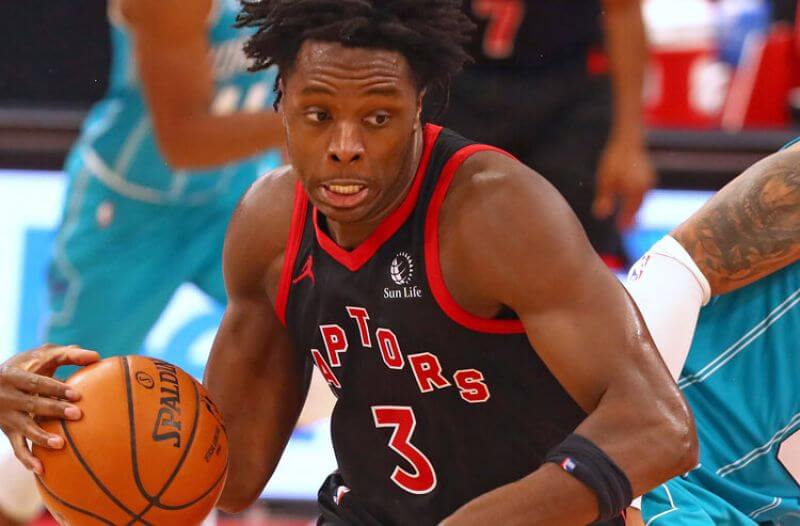 Raptors vs Bucks Picks: Fear For the Deer
Provided by