Nuggets vs Timberwolves Picks and Predictions: Putting the "Valuable" in MVP

Denver is rolling, but this game's spread hinges on the reigning MVP. Find out why Nikola Jokic's status will make or break this matchup from a betting standpoint with our Nuggets vs. Timberwolves picks for Tuesday night.

The Denver Nuggets put their five-game winning streak on the line tonight when they visit the Minneapolis tundra to take on the Minnesota Timberwolves.

Despite Denver being the better team this year and in great current form, it sits as a 3.5-point pup to the Wolves, likely due to the potential absence of a certain reigning MVP.

Find out how that tilts the scales with our Nuggets vs. Timberwolves NBA betting picks and predictions for February 1.

Minnesota opened as a 3.5-point favorite and was briefly bet down to -3 at some books before popping back to the opening number. The total opened at 231.5 and has been bet up or down at a variety of outlets, back to opening at most outlets while sitting at 232 in a few spots.

The Under is 8-3 in Nuggets' last 11 road games. Find more NBA betting trends for Nuggets vs. Timberwolves.

Nuggets vs Timberwolves picks and predictions

Note to all bettors eyeing this game: be sure to wait for an update on Nikola Jokic's status before proceeding (we'd recommend keeping Twitter notifications for Mike Singer on). Jokic is the reigning MVP for a reason: he's the single most important player in the league in terms of spread impact.

Per Cleaning the Glass, Denver is 26.5 points better per 100 possessions with Jokic on the court this season. Which, when we're dealing with a one-possession spread, means all the difference in the world.

Jokic is not only one of the league's most efficient volume scorers, he's arguably the best at raising his teammates' collective floor, contorting the defense with his clever positioning and otherworldly court vision.

For the sake of this preview, we'll assume Jokic will give it a go since "right toe soreness" sounds pretty mild on the spectrum of NBA ailments. If so, the Wolves could be in trouble.

The Nuggets are in peak form right now, on a five-game win streak that includes a 36-point drubbing of the defending champion Bucks.

If Jokic plays, Minnesota could be hard-pressed to find an edge. It forces a lot of turnovers (16.9 per game, leads the league), but primarily through pressuring perimeter ballhandlers and passing lanes — two things Jokic as a primary playmaker can mitigate or eliminate.

The rebounding battle also bodes very poorly for the Wolves, who own the league's 25th-best rate on the boards, while Denver grabs glass at the league's eighth-best rate for the season, and fourth-best over the past 10 games.

On an intangible level, Jokic might be looking to remind the league who the reigning MVP is. He averaged a 25-point triple-double while leading his team to a 4-0 week and was snubbed for Player of the Week honors for Jan. 24-31. Meanwhile, he's had to watch Joel Embiid leapfrog him to become the current NBA MVP odds leader.

Both teams are in a soft schedule spot, having rested last night with an easy game (Detroit for Minny, free-falling Utah for Denver) up next.

This will come down to Jokic, so unless you're feeling like chancing fate, ensure he's playing before locking this bet in.

This total has been set pretty damn high in light of what both of these sides have been doing lately, but we think there's some recency bias involved.

Wolves games are averaging an absurd 243.6 pts over their past seven, while the Nuggets aren't far behind at 234.3. Contrast that with season-long averages of 222.2 (Minnesota) and 215.9 (Denver), and it's clear some regression should be coming on both sides.

The Wolves and Nuggets are both above-average defensive teams, and while Minnesota's one of league's faster-paced teams, it may not find much success igniting a track meet when faced with Jokic's deliberate plodding (Denver's 24th in pace) on the other end. Without Jamal Murray and Michael Porter Jr., the Nuggets know they're ill-equipped for a shootout on most nights, despite Jokic's presence keeping their offense humming at a Top-10 rate.

The three games between these teams so far this season have averaged 205.6 points, going 0-2-1 against this total. For what it's worth, Minnesota also has the largest home/away scoring disparity in the NBA, leading the league at 115.0 road ppg, but managing just 107.9 ppg (22nd) at home.

Look for Denver to try and keep this pace moderate. These teams have been both scoring and allowing points at an unsustainable clip the past couple of weeks. A regression seems likely.

D'Angelo Russell being downgraded to doubtful for tonight's game only increases the appeal of what's already an intriguing prop market.

Karl-Anthony Towns has been stepping up as a playmaker of late, averaging 4.5 assists for the month of January, which is precisely where we find his O/U set tonight.

Towns has topped this number in four of his past six games, including three straight. With Russell sitting on Sunday, he dished out 10 assists against Utah.

This prop seems like at-worst a coin flip, and the potential for increased playmaking with Russell's 6.9 apg sidelined is too great to ignore. When you factor in the +125 price we're getting, it becomes a no-brainer.

Did you know that if you parlayed today’s NBA Nuggets vs. Timberwolves predictions and picks in a single-game parlay, you could win $72.00 on a $10 bet? 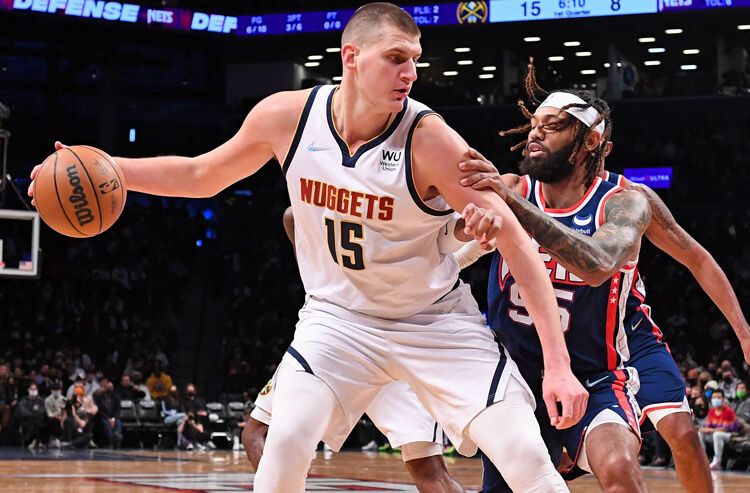 Nuggets vs Timberwolves Picks and Predictions: Putting the "Valuable" in MVP
Provided by