We're starting off the week like we ended the last one: pumping Kevon Looney's rebounds prop. Find out why a back-to-back doesn't sway us from auto-betting Golden State's center with today's NBA player prop picks.

Groundhog Day may be tomorrow but we are making the same bet in back-to-back days today as one of our favorite player props going is back on the board.

The Golden State Warriors are playing their second game in as many nights but all that means is that we just get to back Kevon Looney’s rebounding for the second straight day.

Check out our NBA player prop picks for Tuesday, February 1, as we bank on some of the NBA's best to do their thing.

With the Washington Wizards running a small-ball lineup, for the most part, these days, Kyle Kuzma has become the team’s best rebounders. But can he be effective in tonight’s matchup against the long and athletic Milwaukee Bucks?

Kuzma has really leaned into this new role of cleaning up the glass and is averaging 10.6 rebounds per game over his last 17 games, so it will always get your attention when his rebounding total is set at 8.5. That’s a number he’s gone Over 12 times over this 17-game stretch.

And despite having the likes of Giannis Antetokounmpo and Bobby Portis, the Bucks are just a middle-of-pack rebounding team, ranking 12th in rebounding percentage and 19th in opponent rebounds per game. Kuzma also grabbed 10 boards against the Bucks when these teams last met back in early November, so he has proven he can get the job done in this matchup and we like him to do it again.

It appears that missing six games due to ankle swelling didn’t affect Gary Trent Jr.’s shooting form. The Toronto Raptors’ shooting guard has been cold-blooded from beyond the arc since returning to the lineup. Trent will look to keep drilling threes when he and the Raps host the Miami Heat in a rematch of an epic triple-overtime game from just a few days ago.

The Raptors won that game 124-120 and Trent was a big part of that, going 5-15 from 3-point range. It’s part of a six-game stretch where Trent is hitting a ridiculous 47.1% of his 11.3 attempts per game from downtown, sinking at least three threes in each game over that span. He has also hit four or more in each of his last five games.

While the Raptors are playing the second half of a back-to-back, so too are the Heat. And even though Miami will have Jimmy Butler and PJ Tucker fresh from a night off Monday, they still concede threes. The Heat allow the third-most 3-point attempts per game this season, ranking 16th in opponent 3-point shooting percentage.

We’re not fading Gary to cool off just yet and are happy to get even money on the Over for his made threes prop in this one.

For those who missed yesterday’s PSA on betting Kevon Looney’s rebounding props, listen up. It is basically an auto-bet at this point until either Draymond Green returns from his calf injury, or sportsbooks make a drastic adjustment. So, will the Golden State Warriors playing their second game in as many nights deter us? Hell no.

Looney averages a solid 7.5 rebounds per game for Warriors this season, but that number jumps all the way up to 10.8 per contest over the 14 games that Green has missed. That includes grabbing 14 boards in last night’s matchup against the Houston Rockets.

Now, Looney and his teammates get another chance to keep cleaning up the glass when they go up against the San Antonio Spurs. The Spurs are another team that struggles on the boards, ranking 19th in rebounding percentage and 26th in opponent rebounds per game.

Even in the second half of a back-to-back Looney is set up to have another good day on the glass and with a rebounding total of 9.5, we can’t say no to the Over. It’s a number he has gone Over eight times over this 14-game stretch. 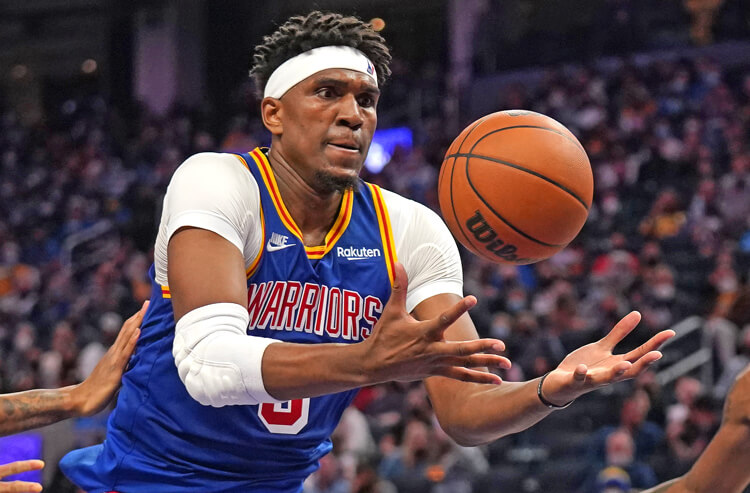