While the Suns have been on cruise control for much of the season, they're giving 7 points to the Nets and their premier backcourt of James Harden and Kyrie Irving. Find out which side to back in our NBA betting picks and predictions.

The Phoenix Suns will be going for their 11th consecutive win when they host the Brooklyn Nets on Monday.

And while the Nets will have Kyrie Irving for this contest, James Harden is listed as questionable for a Brooklyn group that is already without Kevin Durant.

Will Brooklyn find a way to hang around and snap Phoenix’s winning streak? You’ll have to keep reading our NBA picks and predictions for Nets vs. Suns to find out.

The Nets were getting 7 when this line first became available and they’re now down to 6.5-point underdogs in some places. Meanwhile, the total opened at 227 and is up to 227.5 on some sportsbooks.

The Nets are 5-2 ATS in their last seven games as road underdogs. Find more NBA betting trends for Nets vs. Suns.

Nets vs Suns picks and predictions

This Brooklyn team is well equipped to hang around in shootouts, which this game has the potential to be. It definitely helps that the Nets are expecting to get Harden back in this game.

The battle between Irving and Harden and the Suns’ backcourt of Chris Paul and Devin Booker should be a good one, but it’s also one that the Nets could win here. Brooklyn has lost four games in a row coming into this contest, while the Suns are on a 10-game winning streak. With that in mind, there should be a different sense of urgency from Brooklyn, while Phoenix is definitely due for a poor outing or two at some point in the near future.

The Nets will just need some competent play on the wings, as the Suns have an excellent group of forwards. Mikal Bridges and Cam Johnson are both phenomenal and contribute on both ends of the floor, while Brooklyn is weak at forward with Durant out. That’s the real area where Brooklyn could end up being in trouble here.

It is huge for the Nets that Ayton is out, though. Phoenix has done well with its backup centers over the last few weeks, but this is going to be a bit different. The Suns will miss Ayton’s ability to switch on the perimeter against the Nets. It was something that hurt Phoenix against San Antonio last game, which is why the Suns ended up turning to a small-ball lineup with journeyman Ish Wainwright at center.

The Suns should ultimately pull this one out, especially if it ends up being close with under five minutes left. Phoenix has an 18-3 record in crunch-time situations this year, but that doesn’t mean that Brooklyn won’t cover here. This is a lot of points to be giving to a Nets team with one of the best backcourts in basketball.

The Suns and Nets went Under the total when these two met on November 27, but this one should have some more fireworks. Irving will be out there for the Nets in this game, and he’ll seemingly be joined by Harden.

Both players are likely to be in for some big offensive performances, as they’ll be able to attack the rim with Phoenix not having Ayton out there. JaVale McGee is a good rim protector on most nights, but the Spurs were able to play him off the floor last game. Brooklyn could be able to do the same, which would mean that the Suns would have to downsize.

Phoenix, meanwhile, has scored at least 115 points in five of its last eight games, and the team is really in a groove on the offensive end. With that in mind, the Suns should be able to do their part to help Over bettors in this game.

The Nets have also been somewhat immune to great defense, as the Over is 27-14 in Brooklyn’s meetings with teams that allow 108 or fewer points per game over the last two seasons.

This team gets up for these big road games against some of the Western Conference’s best, and the Nets should be able to make this a competitive game without Durant. Phoenix will actually be down to nine active players in this game, which is definitely something that matters as well. The Suns are going to get tired at some point in this game, and that could help the Nets hang around late.

It’s also worth noting that the Suns are just 12-14 ATS when playing as home favorites this season, and that record is 7-10 ATS when they’re favored by 6.5 to 12 points.

Did you know that if you parlayed today’s NBA Nets vs. Suns predictions and picks in a single-game parlay, you could win $26.45 on a $10 bet? 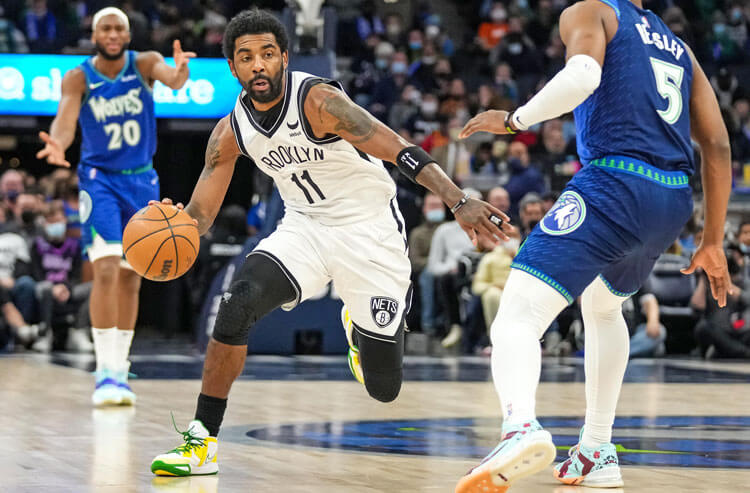 Nets vs Suns Picks and Predictions: Can Harden, Kyrie Keep Things Close in Phoenix?
Provided by