Nets vs Heat Picks and Predictions: Brooklyn's Too Hot for Miami

Miami's vaunted defense is unraveling, which isn't good news having to face Brooklyn tonight. See why Kevin Durant can have another big night with our Nets vs. Heat NBA betting picks.

After losing to the New York Knicks at home, the Miami Heat will look to rebound with a win over the Brooklyn Nets. Kyrie Irving was already going to be eligible to play in this game, but the Nets could have a little extra energy after finding out that the star point guard is now allowed to play in home games moving forward.

Will Brooklyn roll into South Beach and make a statement? Check out our Nets vs. Heat NBA picks and predictions for Saturday, March 26 to find out.

The Heat were only 1-point underdogs when this game became available for bettors, but they’re now 3.5-point home ‘dogs in this one. Meanwhile, the total opened at 226.5 and is now up at 230 or 230.5 across all sportsbooks.

The Nets are 7-2-1 against the spread in their last 10 road games.  Find more NBA betting trends for Nets vs. Heat.

Nets vs Heat picks and predictions

And now, the Nets have won six of their last eight games and could be ready to rip off some wins at a high clip moving forward. With New York changing its vaccine rules a couple of days ago, Irving will be with the team every game the rest of the way. That should allow this team to develop some sort of consistency.

The Heat come into this one having lost three in a row and five of their last eight. Miami is also just 1-7 ATS in its last eight games, and just 13th in the league in defensive rating in that span. That’s a pretty sizable step down from fifth in the NBA, which is where the Heat rank over the course of the entire season. With this group struggling to get stops the way it usually does, it wouldn’t be surprising if Irving and Durant really had their way with this defense. Both players love these bigger matchups, so they’ll be in attack mode early.

The only place that the Heat can really do a lot of damage in this game is on the inside, where Bam Adebayo has what it takes to punish the Nets. Brooklyn will, however, be the better team pretty much everywhere else, and could also look to play some minutes with Durant as a small-ball center. That would bring Adebayo away from the basket, giving the Nets’ other players more room to attack. It’d also force him to have to guard Durant in space, which isn’t an optimal matchup for him.

The Nets are firing on all cylinders right now, and they don’t care who is in front of them. They’re going to go out there and get good shots on the backs of Irving and Durant, who can create good looks for themselves whenever they want. Then, shooters like Seth Curry and Patty Mills will only aid Over bettors by cashing in on their open looks.

To say that Durant gets up when his team is playing in one of the bigger games of the night would be an understatement. The other night, the 33-year-old poured in 37 points in a win over the Utah Jazz, and he has now scored at least 35 in each of his last three contests. Durant also had 53 points in a win over the New York Knicks last week, while also scoring 25 points in a blowout win over the Philadelphia 76ers just three days before that. If Brooklyn didn’t win that game by 29, Durant very likely would have had 30.

Tonight, Brooklyn will be counting on the superstar to lead the way against a very tough Miami team. The Heat will likely feel like they can get away with putting Jimmy Butler on Durant in this one, and you should expect the Nets forward to take that somewhat personally. The last time these two met was on March 3, when Durant had 31 points in a six-point loss to the Heat. Brooklyn didn’t have Irving in that game, but he’ll be back to take some of the attention off Durant here.

Look for the 12-time All-Star to really do some damage here, especially with the Heat having allowed back-to-back opponents to shoot over 50% from the floor.

Did you know that if you parlayed today’s NBA Nets vs. Heat predictions and picks in a single-game parlay, you could win $58.99 on a $10 bet? 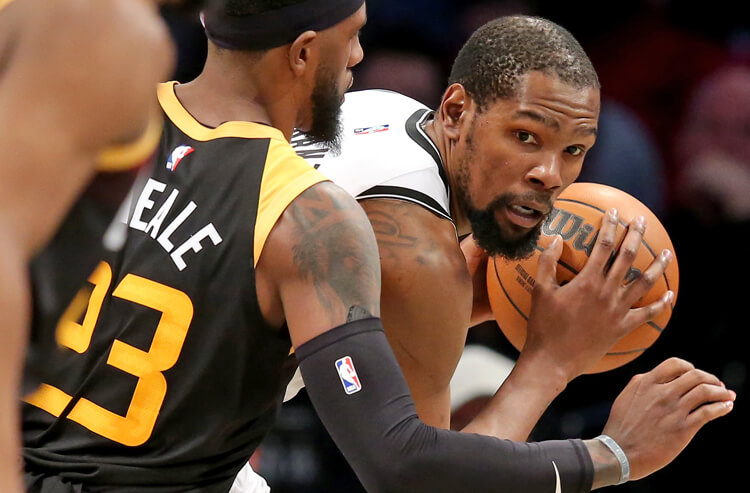 Nets vs Heat Picks and Predictions: Brooklyn's Too Hot for Miami
Provided by