ATL is looking strong again this season, but New Orleans has weathered Zion's absence better than expected. Find out why the books might not be giving the dogs enough credit here with our Hawks vs Pelicans picks.

Wednesday’s NBA betting odds have Trae Young and the Atlanta Hawks rolling into The Big Easy as 6-point road favorites over the New Orleans Pelicans. And while this might seem like a game that Atlanta should have no trouble winning, New Orleans did earn an outright upset victory over the Minnesota Timberwolves at the Target Center last game.

Will New Orleans make it back-to-back covers — and potentially straight-up wins — against Atlanta? Continue reading our Hawks vs. Pelicans picks and predictions to find out.

The Pelicans have been 6-point underdogs since the line for this game first became available. The early majority of the tickets are coming in on the Hawks, but that hasn’t moved anything at all. The total, however, opened at 220.0 and has mostly stayed the same, but can be found at 220.5.

The Pelicans are 4-1 against the spread in their last five games following a straight-up win. Find more NBA betting trends for Hawks vs. Pelicans.

Hawks vs Pelicans picks and predictions

The Hawks are currently second in the league in defensive rating, but they aren’t likely to sustain that effort the rest of the season. After the All-Star break last year, Atlanta was 12th in the league in defensive rating, which was part of the big improvement that the team made when Nate McMillan took over as head coach. However, it’s unfair to expect this roster to end up being a Top-5 defensive unit this year, so look for the Hawks to regress on D — and don’t be surprised if that happens immediately.

The Pelicans haven’t exactly played very well offensively this season — and the team is missing one of the best offensive players in the league in Zion Williamson — but New Orleans was very impressive in a win over Minnesota last game. The Pelicans got 27 points from Brandon Ingram, 22 from Jonas Valanciunas, 21 from Devonte’ Graham and 17 from Nickeil Alexander-Walker. Those are the four guys that are going to need to consistently produce with Zion out of the lineup, so it was nice to see them playing well together in a victory.

Hiding Trae Young in this game will be difficult. Young is obviously one of the best point guards in the league, but he’s miserable on the defensive end and should have a lot of trouble here. Also, while Clint Capela is usually there to help out all of Atlanta’s perimeter defenders with his shot-blocking ability, the big man is going to have his work cut out for him against Valanciunas. The New Orleans center plays an extremely physical brand of basketball, using his big frame to post up and fight on the offensive glass. His brute force wore Karl-Anthony Towns down last game, and it wouldn’t be surprising if he makes his mark on this one as well.

The Pelicans should be around late in this game no matter what, but you’ll want to closely monitor De’Andre Hunter’s status here. If he’s out, New Orleans would be worth a sprinkle on the moneyline. That’d be one less wing defender to throw on Ingram, who should start cooking in short order. Pelicans head coach Willie Green is running a lot of the sets that the Phoenix Suns use for Devin Booker, and that is going to give Ingram some good, clean looks at the basket.

Two of Atlanta’s three games this season have gone Under the total, and the same goes for three of New Orleans’ four games this year. With the way Atlanta defends, it’s not going to be easy for teams to put up huge numbers against them this year — even with some regression from their hot defensive start.

New Orleans, meanwhile, has also played some great defense over the last two games. The Pelicans held the Timberwolves Under 100 points in back-to-back games, and they’ll now look to stifle a Hawks team that only scored 95 points in its lone road game this year.

This game really should end up going down to the wire, making the Pelicans and the points the way to go. If putting something down on the moneyline isn’t for you, that’s completely understandable. This, however, is the play to make on this game.

Atlanta is the better team between these two, but the difference isn’t quite as big as the oddsmakers are making it out to be. That’s especially true when the Pelicans are the home team in this one. The Hawks were just 22-24 against the spread in road games last year, and that 47.8 against-the-spread win percentage was only 22nd in the league. Atlanta has some great shooters on its roster, but a lot of them are streaky and mostly feel comfortable at home.

Did you know that if you parlayed today’s NBA Hawks vs. Pelicans predictions and picks in a single-game parlay, you could win $26.45 on a $10 bet? 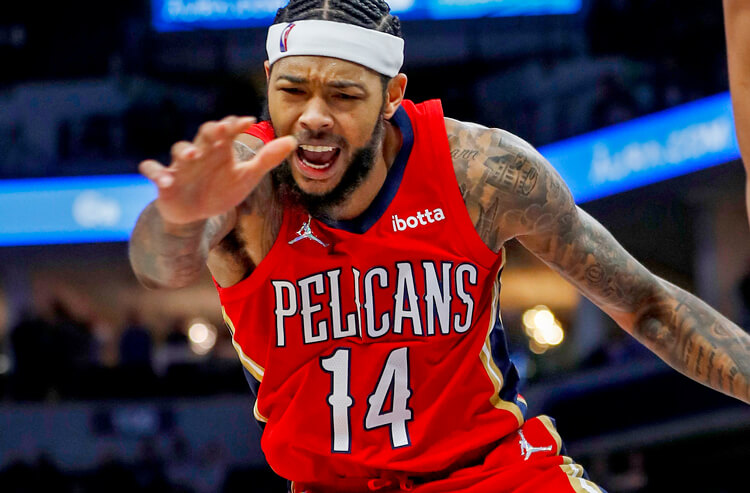