Grizzlies vs Trail Blazers Picks and Predictions: Grizzlies Have The Tools And Momentum To Win Outright

The Grizzlies come into this matchup with some momentum as one of the hottest offensive teams in the NBA, the Blazers...not so much. Dame is also ice-cold. All signs are pointing to one side of the small spread in our Grizzlies vs. Trail Blazers picks.

The Portland Trail Blazers are coming off an embarrassing 30-point loss against the Los Angeles Clippers. Chauncey Billups’ team now hosts a Memphis Grizzlies group that is 3-0 against the spread on the season, which is likely part of the reason that the betting odds only have Memphis as a 2-point underdog in this one.

Will the Grizzlies stay perfect against the spread with a win and cover against the Blazers at the Moda Center? You’ll just have to keep reading our Grizzlies vs. Trail Blazers picks and predictions to get the answer.

Memphis was a 3-point road underdog at the open of this one, but the sharp money clearly suggests that the Grizzlies were getting too many points. Despite a majority of bettors backing the Blazers, Memphis is now just a 2-point or 2.5-point underdog on nearly every book. The total, however, has barely moved, as it opened at 234.0 and has only gotten as high as 234.5 on one book.  Use the live odds widget above to track any future line movements right until tip-off and be sure to check out the full NBA odds before betting to ensure you get the best number.

Memphis is 9-4 ATS in its last 13 games as a road underdog. Find more NBA betting trends for Grizzlies vs. Trail Blazers.

The Grizzlies nearly beat the Los Angeles Lakers outright last game, but star Ja Morant missed the third of three free throws late in the game and that ended up allowing the Lakers to escape with the win. Morant was fouled on a three with Memphis down three in the final seconds and it would have sent his team to overtime, where the Grizzlies would have had all the momentum.

Memphis did, however, show the world just how good this team really is in that loss, and now the Grizzlies get to play a Blazers team that just doesn’t look right at the moment. Whereas Morant is averaging 35.0 points and 8.0 assists per game on absurd shooting percentages for Memphis this year, Damian Lillard is averaging only 17.0 points and 7.3 assists per game on 36.0% shooting from the floor and 8.3% shooting from three. Lillard is going through one of the coldest stretches of his career, and it’s fair to wonder if he simply has one foot out the door at this point. There has been a lot of trade speculation surrounding Lillard over the years, and this Portland team just seems as stale as can be right now. Sure, Lillard is bound to snap out of it shortly, but the Grizzlies arguably have the edge at point guard right now — at the very least, it’s not a stretch to say that Morant is capable of holding his own in this matchup.

The Grizzlies also have the luxury of putting De’Anthony Melton on either Lillard or C.J. McCollum in this game. Melton is one of the better perimeter defenders in basketball right now, so he can shake things up by making one of those guys uncomfortable. McCollum has been scorching hot to start the year, so it wouldn’t be too shocking if that’s where Memphis deploys its young 3-and-D guard.

Right now, Memphis’ offensive rating of 121.3 is the highest in basketball and the second-highest number is 114.1, which belongs to the Charlotte Hornets. The Grizzlies are just clicking in the early going, as Morant is capable of making plays for himself whenever he wants, but he also has a stable of shooters to kick out to when he draws an extra defender. Considering the Blazers are a lousy defensive team, this seems like a game that the Grizzlies can legitimately win outright.

The Grizzlies haven’t played a single game this season that has gone Under the total, and the Blazers have gone Over in two of their three games this season. This number tonight is definitely somewhat high, but that doesn’t make the Under the right play here. These are two teams that care far more about offense than they do defense, and sometimes it’s easiest to just keep it simple and root for the points.

So far this season, the Grizzlies are first in the league in offensive rating. At the same time, Memphis is also last in defensive rating, meaning that opponents can get hot if they’re making their shots. This seems like a good opportunity for Lillard to get back on track for Portland, and some of the Blazers’ other shooters should get some opportunities here. If that happens, the Over should easily hit as we know we can expect the Grizzlies to perform well on offense.

Morant is attempting 6.0 threes per game this season, and the youngster is shooting 44.4% from the outside on those looks. Against the Lakers on Sunday, Morant hit five triples in a 40-point performance, marking the second game in a row that he hit at least two triples.

With Morant significantly increasing his volume from the outside, it’s only a matter of time before the oddsmakers have to set this number a lot higher. Morant took only 3.8 threes per game last year, but he is shooting it more frequently this season and just so happens to be a good shooter.

Morant is also going to be amped up for this matchup with Lillard, as he’s wired to go out there and prove he’s the best player on the court every night. That should help Morant sustain his absurd early-season level, so you should expect him to make a few threes in this game.

Did you know that if you parlayed today’s NBA Grizzlies vs. Trail Blazers predictions and picks in a single-game parlay, you could win $49.08 on a $10 bet? 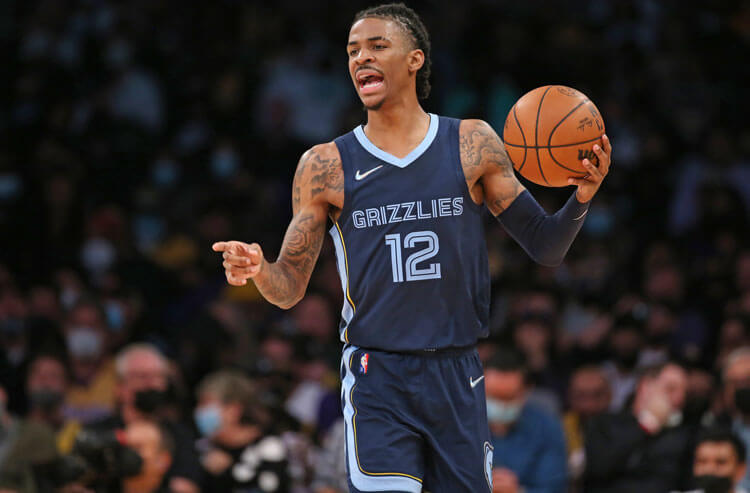 Grizzlies vs Trail Blazers Picks and Predictions: Grizzlies Have The Tools And Momentum To Win Outright
Provided by

Nuggets vs Bulls Picks and Predictions: Bulls Offense Too Much For Road Nuggets
Andrew Caley | Dec 6, 2021