Toronto and Indiana are both 1-3 in the early season, but one of these squads is probably better than its record suggests. Our Pacers vs. Raptors picks break down your best value as Indy clashes with its former coach once again.

The Toronto Raptors' home-heavy early-season schedule carries on tonight as they host the Indiana Pacers in The 6.

The Raptors and Pacers have both gotten off to slow starts, knotted at 1-3 so far this season. And contrasting styles will make an interesting contest for NBA betting purposes.

Find out where your best value sits as we break down our Pacers vs. Raptors picks for Wednesday, October 27.

The spread opened at Indiana -1, briefly jumping to -1.5 at some books before settling back at opening. The total hit the books at 218.5, being bet down to 217.5 in most spots.

Over is 6-1 in Pacers' last seven games as a road favorite. Find more NBA betting trends for Pacers vs. Raptors.

Pacers vs Raptors picks and predictions

The Pacers are a curious case so far in this young NBA season. They're a team in flux with a new coach, their two best swingmen scorers injured, and they have faced one of the tougher schedules thus far. Still, two of their three losses have been by a single point, with the other having come against the defending champion Bucks.

The Raptors have been somewhat predictable thus far: Tenacious on D, tough to watch on offense, and a scrappy, energetic young unit that's still very much feeling itself out.

Malcolm Brogdon and Domantas Sabonis have been dynamite so far for Indiana, buoying the team's offense while Caris LeVert and T.J. Warren are still sidelined. New bench boss Rick Carlisle is a noted wizard with the clipboard, coaching Dallas to (at the time) the best offensive rating ever in 2019-20.

The big question here becomes whether the Raptors can match wits on defense, slow the Pacers down and keep the score within reach. Especially with Pascal Siakam in suits, Toronto has no business trying to outscore any opponent, and its approach in this game has to take a narrow focus as such.

The Raps will be able to harass Sabonis with their troupe of long-limbed quasi-bigs, but ultimately his game is too crafty and dynamic for them to completely shut him down. Rookie Chris Duarte has been a possible Rookie of the Year surprise, averaging nearly 20 points per game on just 41 percent shooting, suggesting possible upside. And Brogdon will be a definite All-Star candidate if he keeps up this pace, providing a two-way anchor that will make life tough on Fred VanVleet (who, along with OG Anunoby, has struggled with consistency this year) on both ends.

Ultimately, Toronto looks like the worse team on paper, and needs to control the tempo to win this game — something such a young team with little experience together is ill-suited to do.

If you're looking for an added intangible angle, don't forget the Pacers will probably want to stick it to former head coach Nate Bjorkgren, who was not-so-subtly hated by his team last year, and is now back on the Raptors' bench as an assistant.

Again, this total will come down to how well the Raptors can control tempo and shut down the Pacers, as we're getting two very contrasting styles here.

The Pacers (true to their name) have kept things up-tempo under Carlisle, playing at the NBA's third-highest pace so far, after ranking second in 2020-21. As a result, they're fourth in the league in scoring at 116.8 ppg.

This is heavily contrasted by the plucky Raptors, who play at the third-slowest pace and manage the fourth-fewest points per game, perfectly mirroring Indiana's rankings from the league's basement.

But Toronto's also been somewhat enabled so far, with three of its four opponents ranking in the bottom half of the league in pace. Indiana can bring an extra gear out of this young Raps squad, who certainly can run when needed, with the second-highest transition rate in the league.

Indiana is more likely to dictate this game's pace and force Toronto's hand by pushing the score. The Pacers average 233.75 total points across their four games, despite a 193-point outlier against Under-magnet Miami. There's a risk that the Raptors put up a complete turd on offense, but they'll get enough looks in this one to give the Over some value.

Indiana's going to be a tough test for this Raptors squad, and the spread doesn't seem to be giving it enough respect. The Pacers are a better team than their record suggests, and in this matchup, can force a younger, less-cohesive team out of its comfort zone.

Carlisle's one of the most underrated coaches in NBA history, and while Nick Nurse clicks buttons with his rotation to mine some identity from his young roster, Slick Rick has a number of looks he can trot out for Indiana, and will be on-the-ball with his counters.

VanVleet and Anunoby have looked somewhat overwhelmed as underqualified go-to scorers, and the Raptors are going to need either an apex defensive effort, or more offensive punch than they can muster against one of the league's most impressive offenses thus far.

Did you know that if you parlayed today’s NBA Pacers vs. Raptors predictions and picks in a single-game parlay, you could win $26.45 on a $10 bet? 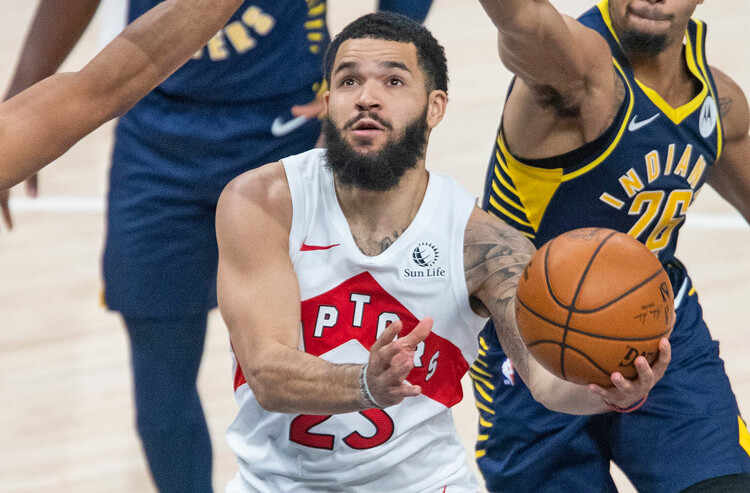 Pacers vs Raptors Picks and Predictions: Raps Hard-Pressed to Outscore Pacers
Provided by