The Grizzlies made it clear in Game 5 that they're not ready for hibernation. Still, NBA betting odds have them as a large dog tonight, and we think Golden State's in for more of a fight. Jaren Jackson Jr. leads the way in our Grizzlies vs. Warriors picks.

After getting blown out in historic fashion in Game 5, the Golden State Warriors will take another shot at ending their series against the Memphis Grizzlies on Friday, May 13th.

With Ja Morant still sidelined, can Memphis keep its season alive in Grizzlies vs. Warriors Game 6 tonight? Read on for our detailed NBA picks and predictions to find out.

It’s difficult to know what, if anything, to take away from Wednesday's utter domination of the Warriors at the hands of the short-handed Grizzlies. In a game again featuring no Ja Morant, the Grizzlies led by as many as 52 points. While the final 39-point margin avoided all-time blowout level, the way the game was actually played during its competitive portion certainly earns that distinction.

So, did the Warriors really fold because they expected to walk into an easy victory? Or is this version of the Grizzlies without Morant a stiffer opponent than Golden State is comfortable admitting?

The box score for Game 5 is so absurd it almost has to be thrown out, but there are a few critical takeaways from the Grizzlies' side to zero in on. One is the continued outstanding play of Tyus Jones — backup point guard extraordinaire now thrust into a starting role for Memphis — who led the way with 21 points, 9 assists, and 0 turnovers. Per Justin Kubatko, including the playoffs, the Grizzlies are 20-5 when Jones starts this season and have a +15.9-point differential in those contests.

Jones made his bread as a table-setting guard, but his growing willingness as a shooter has transformed him into the best backup point in the league. Nobody would consider him an upgrade over Morant, but because Jones is such a stout defender Memphis can run lineups featuring zero defensive weaknesses with Jones running point.

The other notable change is that Steven Adams has returned from health and safety protocols, and with him has returned a core part of the Grizzlies’ identity. Memphis won so many games in the regular season by dominating the possession battle, largely by being an elite offensive rebounding team.

There was no one better at that than Adams, who tallied 13 rebounds in just 21 minutes in Game 5, including 6 on the offensive glass. Unlike the Minnesota Timberwolves, the Warriors have no stretch five with which to play Adams off the court, so he’s free to bully Draymond Green or Kevon Looney on the interior.

Lastly, and perhaps most importantly, Desmond Bane has finally arrived in this series. After dealing with a back issue for the first four games, he looked every bit the shot-creator and off-ball threat that had him earning fringe All-Star consideration this season.

Bane gives the Grizzlies offense a level of dynamism and creativity that they sorely lacked without he and Ja. With Bane, Tyus, Adams, and of course Jaren Jackson Jr. all playing at this level again, this Memphis team is not going to go quietly.

The Warriors are also, as we’ve seen in two straight series now, capable of playing maddeningly inconsistent basketball. At their peak, they play championship-caliber ball, but the gap between themselves and this Memphis team is not so wide that they can afford to choose when and where to turn up the intensity without consequence. Their narrow 3-point win in Game 4 is more reflective of their average level of play than anything else has been in this series.

But while the Warriors get the respect of the oddsmakers, it’s this Grizzlies team that consistently finds ways to cover, including without Morant. Including the playoffs, they’re 59-33-1 ATS. The Warriors were barely a notch above .500 ATS. And further, the Warriors are just 1-6 ATS in their last seven games overall.

The Warriors played with their food once already and got burned. But even if they bring their A-game, they’ll have their hands full with this Memphis team.

The Grizzlies played at the third-fastest pace in the NBA this season, and without being able to rely on Morant, they’re sure to emphasize transition even more. By contrast, the Warriors had the fifth-best half-court offense in the NBA during the regular season, so while they don’t have the young legs of this Memphis group, they find ways to break down the defense. Though they’re not reliable to cover, the Warriors do consistently beat their totals, with the Over hitting in eight of their last 11 overall.

With Bane, Adams, and Jones coming on strong it’s difficult to see how the Warriors would again completely shut down this Memphis offense as they did earlier in the series. Golden State is also due for some positive shooting regression after the abomination that was Game 5, and as such, I like the Over.

Jaren Jackson Jr. had a legitimate case this season for winning Defensive Player of the Year. His mobility, size, and timing are otherworldly, as is his ability to shift between the perimeter and the paint with ease. The only thing that really hurts his production at this point is the threat of fouling out.

Steven Adams returning stabilizes Jackson Jr.’s role and they have a natural synergy on defense that augments Jaren’s best tendencies and mitigates some of his more questionable habits.  Playing with Adams lets JJJ act more as a help defender on the interior rather than a primary rim protector, which helps keep him out of foul trouble.

Jackson’s blocks jump from 1.8 per game without Adams to 2.8 per game with Adams in the lineup during these playoffs. With Adams here to stay, Jackson Jr. is a strong bet to cash this prop.

Did you know that if you parlayed today’s NBA Grizzlies vs. Warriors predictions and picks in a single-game parlay, you could win $48.94 on a $10 bet? 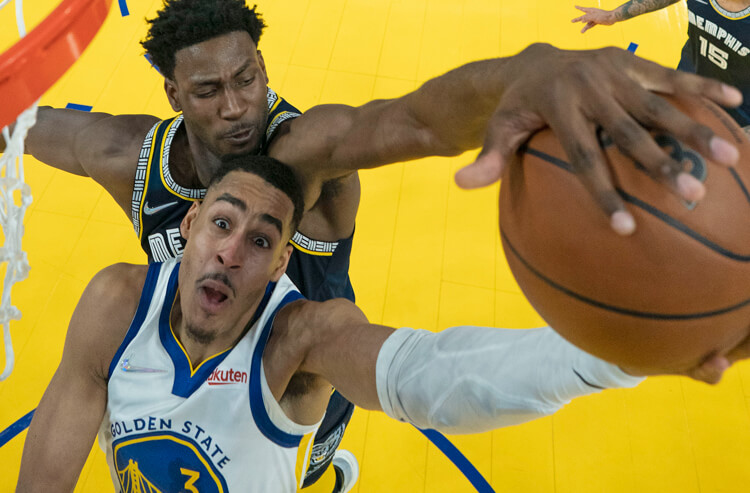