Boston will always bring tough D, but Milwaukee's been flexing its muscle on the offensive glass and swinging this series as a result. With razor-close margins, the little things matter as we break down our Game 6 Celtics vs. Bucks picks.

A deflating Game 5 loss to the Milwaukee Bucks has left the Boston Celtics on the brink of elimination, in need of a road win to force a Game 7.

Boston has already won at Milwaukee in this series, so the task is not impossible — certainly not with a spread of less than a bucket — but it will still be a tall ask for the Celtics. Can they upset Giannis tonight?

Here are our free NBA picks and predictions for the Celtics at the Bucks on May 13.

Since this line opened just past midnight on Thursday morning, the Bucks have remained 1.5-point favorites, with some books ticking down to -1.0 on Friday morning. The total moved a bit more, but ended up where it began. After opening at 212.0, it fell as low as 210.5 early Thursday before climbing back to 212.0 on Friday morning.

If the old adage “No team is as good or as bad as its most recent game” is true, and this handicapper very much believes in it, then it should apply doubly to a team’s most recent quarter, right? Yet, it is hard, if not impossible, to dismiss the Bucks’ fourth-quarter dominance on Wednesday. In the most important 12 minutes of their seasons, Milwaukee outscored Boston by 12 points, erasing a nine-point deficit to take control of the series.

And that was just a nine-point deficit to start the quarter. It ballooned to 14 points before Milwaukee stormed back.

The Celtics did not shoot particularly well in Game 5 — only 32.3% from deep, compared to the Bucks’ 44.8% — but they did protect the ball well enough. They were undone on the glass, particularly by Milwaukee’s offensive rebounding. The Bucks grabbed 17 offensive rebounds, which helped give them 10 more field goal attempts than Boston.

That worry first reared its head in Game 4, when Milwaukee snagged 13 offensive boards and similarly took 10 more field goal attempts than the Celtics. Boston covered that up with strong shooting from deep and spectacular efficiency from the free-throw line.

Celtics head coach Ime Udoka assuredly has his own wrinkle for tonight, but there may be only so much he can do to slow Milwaukee on the glass.

To overcome that, Boston clearly needs to shoot better from deep. If it cannot create ss many chances as the Bucks do, it needs to capitalize on those first chances. Nothing about this is revolutionary.

This view breaks this handicap down into wondering what is more likely: That the Celtics shoot nearly 40 percent from deep or that the Bucks collect offensive rebounds? The latter simply feels more certain.

In a rowdy environment with a chance to clinch the best series of the playoffs thus far, deferring to the home team makes sense, anyway. Betting on its hard work, rather than the road team’s shooting variance, is the logical move.

Those offensive rebounds have also led to two consecutive Overs in this series, which opened with three Unders — healthy Unders, for that matter. The first three games flew Under their totals by an average of 19 points. The totals kept falling, but they could not fall low enough.

Now note, through three games, the offensive rebound tally was tied. Neither team had outdone the other in that regard by more than two rebounds in a game.

The Celtics’ defense is so good, the Bucks would need multiple attempts at the rim to push this game toward an Over. Without those, 103-101 felt like a high-scoring game. But now that Milwaukee is crashing the boards with such ferocity, it is scoring, too. Well, scoring is a relative term, again giving credit to Boston’s defense.

As long as the Bucks — be it Lopez or Portis or Giannis Antetokounmpo — are grabbing offensive rebounds, the Overs in this series have renewed life.

Dueling thoughts are driving this coward’s best bet. Some sharps are reportedly on Boston to win tonight, but siding with the road team against the defending champs is a move yours truly cannot get behind, even if that is the want. It is the want because on this desk sits a cigar tin full of sportsbook tickets, and in that tin is one from February betting on the Celtics to win the Eastern Conference at +1,400.

With that transparency, betting on Milwaukee to win tonight is a non-starter, as it would be a recommended bet that yours truly would actively cheer against tonight, but betting on Boston to win feels like a losing bet.

Instead, let’s make a first-half play. Let’s bet on the Celtics to open strong and desperate. They have won three of the five first halves in this series, and one of the two losses was by a single point. They need to win tonight more than the Bucks do, and opening with that focus could yield a quick profit.

Pick: Celtics first half (+100 at DraftKings)

Did you know that if you parlayed today’s NBA Celtics vs. Bucks predictions and picks in a single-game parlay, you could win $62.89 on a $10 bet? 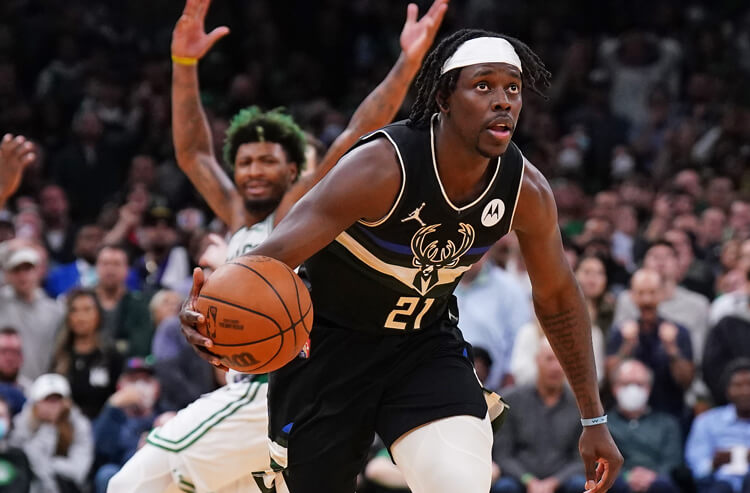