Memphis beat the pants off of Minnesota in Game 2, but now faces a curiously small spread on the road. Find out why the favorites can keep the momentum rolling with our NBA betting picks for Grizzlies vs. Timberwolves tonight.

We have a series on our hands.

The Memphis Grizzlies set off lingering alarms about their brand of basketball's playoff sustainability with a Game 1 loss to the Minnesota Timberwolves, but bounced back with a resounding 28-point win in Game 2 to knot the series.

Memphis must now keep the momentum rolling on the road, facing a thinly-favored spread and what's sure to be a renewed focus from their hosts.

Find out who will take the edge in this critical Game 3 with our Grizzlies vs. Timberwolves NBA betting picks and predictions for Thursday, April 21.

Over is 10-1 in Grizzlies' last 11 playoff games. Find more NBA betting trends for Grizzlies vs. Timberwolves.

Grizzlies vs Timberwolves picks and predictions

As Memphis has done consistently this season, it responded to a crappy performance and ran Minnesota off the court in Game 2, winning 124-96 to decisively snuff any momentum the Wolves thought they'd snagged.

It's now back to the drawing board for Minny — who thought it had gained an edge against Steven Adams in Game 1 — only to see Taylor Jenkins glue him to Memphis' bench in favor of small-ball-ish lineups with Jaren Jackson Jr. and Xavier Tillman at center. The results spoke for themselves, not only in the final score, but Karl-Anthony Towns spending most of the night in foul trouble and only scoring 15 points.

Memphis' current permutation was far more effective in defending Minny's five-out attack, holding it to just 39.5% shooting — including 28.9% on a 3-point array that represented half the Wolves' shots. Minnesota had the NBA's third-highest 3-point rate this season and is very much a team that can live and die by the three.

And while Towns can easily morph into a low-block scorer — especially against a small-ball lineup — Memphis' "small ball" set happens to feature the dude that led the entire league in blocks this year, and had the sixth-lowest opponent FG percentage inside five feet among qualifying players.

Conversely, the Wolves seemed unable to stop Memphis from getting exactly what it wanted. Ja Morant carved up the perimeter, and more often than not found a wide-open cutter when the Wolves frantically collapsed on him. The Grizzlies weren't even that unsustainably hot, shooting 47.8% from the field (slightly above their season average of 46.2%), and a paltry 32.4% from long range. Their effort is very replicable.

Memphis has arguably the deepest bench in the entire league, and it took only one game to find the right combination to cripple Minnesota's main edge in this series. The Wolves played horribly in Game 2 and will almost certainly make this game closer, but they're the ones on the hot seat, and the Grizzlies aren't likely to take the pressure off.

Nine of the Grizzlies' last 10 wins have come by eight or more points, and during said span, their average margin of victory is 21.6. Yes these are the playoffs, and the game will slow, and adjustments will be made, yadda yadda.

Put simply: Even if you account for a playoff pace, Memphis should win this game by more than a bucket if it does at all. And we think it will.

As noted above, we're aware of the normal form that playoff basketball takes on: More meticulous, disciplined play from shorter rotations, heightening both their intensity and ability to key in and adjust to the opponent. The result, far more often than not, is a slower pace, and lower score.

That isn't necessarily the case here.

The Wolves and Grizzlies were the league's first and fourth-fastest teams in the regular season, and play styles of basketball that perfectly enable each other's fast and loose tendencies: Teams with young, athletic legs and lots of bucket-getters, who love forcing turnovers and getting out into the open court.

Game 1 was played at a 106 pace, and Game 2 clocked in 102.5, both of which top Minnesota's league-leading regular-season mark (101.47). Safe to say, this has easily been the fastest-pace series to date in these playoffs.

So, the blueprint is definitely there for back-and-forth action between two Top-10 offenses, and Minnesota can't possibly put up more of a turd than it did in Game 2. Memphis' offense is humming, and the Wolves — while awful on both sides of the ball in Game 2 — have more overt upside to realize on the offensive end.

Game 1 easily went Over (as the Grizzlies have in every playoff game with this core, save Game 2) and we have faith in an offense as potent as Minnesota's to put up a much better effort in Game 3.

With this total falling steadily since opening, we're getting a little extra value, and feel like this series' cadence lends itself more to the Wolves' offensive improvements than a defensive crackdown.

As mentioned above, Memphis has been blowing teams out quite a bit of late and has definitely turned the tables on Minnesota heading into Game 3.

Given how thoroughly the Grizzlies flustered their foes in Game 2, this 1.5-point spread seems very thin, especially since the Grizz were the NBA's third-best against the spread road team at 25-15 this year. Minnesota performed well at home (22-18-2 ATS), but has to make serious adjustments and improvements against a hungry team that smells blood in the water.

The Grizzlies can hurt you in so many ways and have a definite killer instinct that belies their youth. We wouldn't be surprised at all to see them pounce on the Wolves.

We think there's value in adding a bucket on the alt-spread — and that the line should be closer to -4.5 — but don't want to get too greedy against a dangerous Minnesota team that, while staggering, should not be underestimated.

Did you know that if you parlayed today’s NBA Grizzlies vs. Timberwolves predictions and picks in a single-game parlay, you could win $70.14 on a $10 bet? 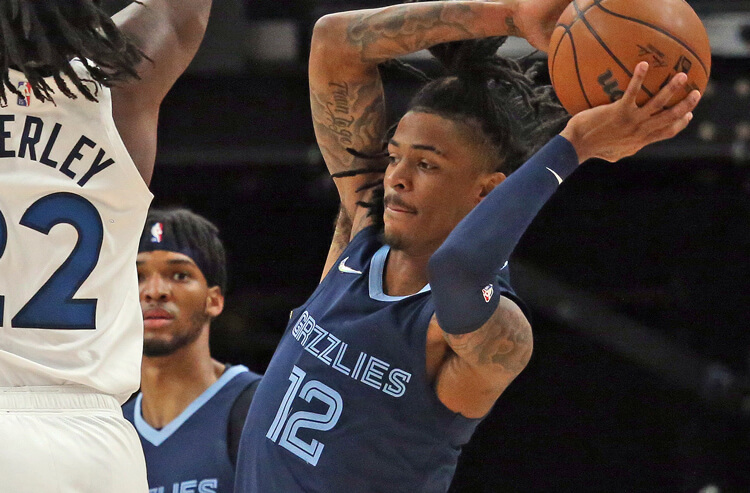