With the series shifting to Utah for a critical Game 3, our NBA betting picks and predictions are expecting the Jazz to find their offensive tune after two slow-paced games in Dallas, helping this game ultimately topple the 210-point total.

The status of Dallas Mavericks star Luka Doncic has the spread for Game 3 versus the Utah Jazz going “up and down like a dog’s breakfast”, as my Newfoundland mother in-law would say.

The Mavericks opened as 7.5-point road underdogs in Utah after stunning the Jazz in Game 2 and that line slimmed to +6 with hope that Doncic would return from a calf injury. However, with Doncic officially questionable, this spread has crept back up to seven points.

We try to make sense of his status and the odds for Game 3 with our free NBA picks and predictions for Mavericks at Jazz on April 21.

As mentioned, the opener installed Utah as a 7.5-point home favorite coming off the loss at Dallas in Game 2. With optimism around Doncic’s health as well as action trying to get ahead of any news, that line dropped to Utah -6. Doncic was listed as questionable on Wednesday and as of Thursday afternoon, some books are as high as Jazz -7 (-110). The total hit the board at 208.5 and climbed to as high as 210.5 points before slimming to 210 at some shops.

The Over is 4-1-1 in the Jazz’s last six home games. Find more NBA betting trends for Mavericks vs. Jazz.

Mavericks vs Jazz picks and predictions

The market moves are often ahead of the official news, which really made it look like Luka was ready to return for Game 3. His status of questionable is actually an upgrade over his prognosis for the first two games but with this spread climbing back toward the opener, you get the feeling like the Mavs may miss their star guard tonight.

Dallas did just fine without Doncic in Game 2, flexing its muscle on both ends of the floor. The Mavericks' defense continued to stifle the Jazz while the offense shot 47% from the floor and buried Utah under 22 3-point makes.

The Mavericks still only managed 110 points with that flood of 3-pointers and a regression is absolutely on the way for a team that averaged only 13 triples per contest and now hits the road to face a Utah defense focusing on getting in front of those shooters.

Dallas’ plodding pace on offense and strong work on the defensive end has stuck this series in mud. That downtick in tempo and some overzealous officiating has really thrown the Jazz for a loop, busting up the way they do business.

Foul trouble and tight perimeter play have halted any offensive flow for Utah, which has watched guys like Mike Conley, Royce O’Neale, Jordan Clarkson, and Rudy Gobert struggle to put in their usual contributions.

Head coach Quin Snyder is promoting better ball movement, faster pace, and getting away from isolation sets, as to keep everyone involved – all things within the Jazz’s control.

Giving everyone a touch will keep guys warm and help with the interior yips Utah struggled with so far in the series. The Jazz are one of the better teams at getting inside and shooting an efficient rate, finishing second in EFG during the regular season (55.5%). However, in two games in Dallas, that reliable output has slumped to just 50.3% with the team seeing less than 47% success at the rim.

This spread will jump around a lot once we get anything concrete on Doncic, but for now I’m buying into the Jazz getting their tune right on offense and covering the current line.

Part of fixing Utah’s offensive issues is pushing the pace in Game 3. Snyder was adamant about turning up the tempo ahead of the series and is really barking about faster play after listless offensive efforts in Games 1 and 2.

The Jazz are being sucked into a blackhole pace rating of 89.75 in the opening games of the series. Utah is not known for its tempo but that current speed is well below the team’s season-long metric of 97.50. Playing at that slower speed has really hurt the Jazz’s 3-point shooting, allowing the Mavs to get set with heels above the 3-point line and protect the arc.

Synder wants to see more aggressiveness in transition and early ball movement, opening up space for off-the-dribble 3-point attempts as well as looks off skip passes and head-man passes. Utah is just 18-for-51 from deep so far in the playoffs after knocking down the second-most triples in the NBA this season.

As for the Mavericks, they’ve gone with a smaller lineup to spread out Utah’s interior defense, giving more minutes to versatile 6-foot-10 forward Maxi Kleber, who lit up Utah for eight triples on 11 attempts in Game 2 and is 10-for-16 from distance for the series.

The Mavericks guards, like Jalen Brunson, have been aggressive with their attack and have drawn a ton of whistles, getting Utah’s backcourt into big foul trouble. Conley and Clarkson were limited due to fouls in Game 2 and that could change how the Jazz defend in Game 3.

Conley harped about the foul calls in interviews before Game 3 as did Snyder, and with backup guard Trent Forest out of action with an ankle sprain, the Jazz can’t afford to sit key members of their backcourt in a vital Game 3 matchup. That could mean softer defense on Dallas, which could be huge if Doncic does lace them up.

Whether Doncic goes or not, I really like the Over in this Game 3.

The swing to Salt Lake City will help the Jazz shake their offensive woes and an emphasis on tempo should snap Utah’s cold shooting from beyond the arc as well. Conley is bound for a bounce-back game as one of the most consistent players in the league and Clarkson, Donovan Mitchell, and Bojan Bogdanovic can all erupt for buckets.

The Mavericks have been breaking Utah’s defense wide open with strong takes inside and that dribble penetration has led to open looks on kickouts.

Dallas has ditched trying to topple Gobert in the paint and is playing five perimeter threats, boasting five players attempting five or more 3-pointers in Game 2. Expect that increase in 3-point looks to stick around for Game 3.

Utah isn’t great at rotating over and was late on help defense plenty of times in Game 2. The Jazz are used to parking Gobert in the paint and funnelling foes into their shot blocker while being able to cheat up knowing the shot blocker is behind them. But with Gobert sucked away from the basket, Utah is lost on that end of the floor.

Did you know that if you parlayed today’s NBA Mavericks vs. Jazz predictions and picks in a single-game parlay, you could win $25.69 on a $10 bet? 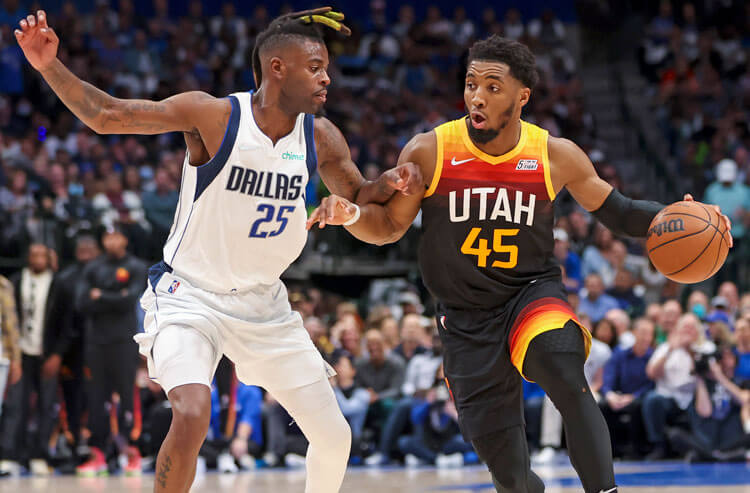