Golden State heads to the Mile High for Game 3, and although Denver has been outclassed so far, it's getting both a slim spread and early action for Thursday's matchup. We're not buying it, and riding the Dubs' momentum with our Warriors vs. Nuggets picks.

One MVP does not equal the might of five full-fledged stars, especially when that assortment of talent is playing the championship-calibre chemistry of the Golden State Warriors.

Nikola Jokic and the Denver Nuggets return to the mountain top down 0-2 to the Warriors in their Round 1 Western Conference playoff series, and books aren’t giving the host team much credit in Game 3. Denver is a 2-point underdog inside Ball Arena — a role the Nuggets have played only seven times this season, going 2-5 ATS as a home pup.

Here are our free NBA picks and predictions for Warriors at Nuggets on April 21.

Denver opened as high as +2.5 for this first home stand of the series and early money has sided with the Nuggets, slimming that spread to as low as +1.5 as of Wednesday morning. The total opened at 224.5 points and has bounced between that number and 223.5 with most shops dealing the original total.

The Nuggets are 3-8-1 ATS in their last 12 games vs. a team with a winning percentage above .600. Find more NBA betting trends for Warriors vs. Nuggets.

Warriors vs Nuggets picks and predictions

Frustrations of a long season boiled over in the Nuggets’ Game 2 loss, with Jokic getting tossed and Denver teammates at each other’s throats during Monday’s 20-point drubbing by Golden State.

The Nuggets had their fingers crossed that long-absent standouts Jamal Murray and Michael Porter could return from injury in time for the postseason, much the same way the Warriors have gradually reassembled their crew at the perfect moment. But that hasn’t panned out, and it really feels like Jokic versus the World at this point.

Golden State is playing all-world basketball through two games. It’s shooting an effective field goal rate of 63.6% with an advanced offensive rating of 131.7. There are three players scoring 20 points or more and two other guys who could go for 20 just as easily. The Warriors have recorded 60 assists on 89 total field goals made and their best player has amassed 50 points in 44 total minutes of play this series.

That offensive outpouring is bound for regression with the series swinging to Denver for the next two games, but even if the Dubs do slip a bit in the scoring department, it will still be enough to put away a Nuggets team that looks defeated on both ends of the floor.

It’s a big ask for Denver to match Golden State’s firepower as it’s just not deep enough, especially with second-leading scorer Aaron Gordon putting out efforts of seven and eight points in the first two contests (shooting 6-for-19).

Defensively, the Nuggets have been putrid since March, allowing 118.6 points per game in the final 21 games of regular-season action, including a 121.9 ppg against average in the 14 home games during that span. At this point, the Nuggets are just hoping the Warriors miss shots on the road. However, the Dubs are built to absorb any down games with a surplus of scoring options to pick up any slack.

The spread for Game 3 opened as big as Golden State -2.5 and has come down to as low as -1.5, but I am shocked the line opened so short and equally amazed the early money took the Nuggets. There’s nothing compelling me to back the Nuggets other than they’re playing at home.

Denver is a rare home underdog in Game 2, having been given the points inside Ball Arena only seven times this season and just 14 times in the past two years. But with the Nuggets going 4-10 SU and ATS in those rare spots as home pups, books have them set as underdogs for a reason.

For all the praise being thrown at Golden State’s offense, we should also give the Dubs defense a tip of the cap. The Warriors are using their length and athleticism to gum up the works of the Denver attack, which relies on patient playmaking and generating buckets from off-the-ball cuts and assists.

Through two games, the Nuggets have picked up an average of 0.67 points per play from cuts (lowest of the playoffs) compared to 1.35 in the regular season (sixth-highest). While the Warriors’ chemistry has cooked up plenty of assists, Denver’s offense has produced just 46 through the first two contests after averaging 28 assists per game in the regular season (third-most).

Head coach Michael Malone needs to pump the breaks with his playbook and reset the Nuggets’ approach, which means going after the Warriors’ interior – the one area in which Denver holds an advantage with the MVP.

Expect Denver not to dawdle and push the ball into the post, allowing Jokic to attack from the blocks. He shot just two free throws in Game 1 then followed that with an 8-for-8 effort from the stripe in Game 2. He was tossed for lashing out at the refs on Monday and Malone has also questioned the officiating, which may sway some whistles their way at home.

Jokic will attack until Golden State can stop him, which could mean throwing extra bodies inside and giving up space to the Nuggets’ perimeter players. Denver didn’t shoot the ball well in the Bay Area — hitting at just 44.4% — but has to see an uptick in makes at home.

As for the Warriors, I mentioned a natural regression for their scoring output away from home, but this is a team that doesn’t leave many empty possessions on the table. Golden State has posted scores of 126 and 123 and its starters are averaging only 27 minutes per game.

The Game 3 total is sitting at 224 points, a tick higher than the previous two numbers for the series. And while the final score may not have the same headroom for the Over as Games 1 and 2, I feel more comfortable playing a high-scoring game than a lower finish with all this talent on the floor.

What am I missing here?

This playoff version of the Warriors is the team we all drooled over when placing Golden State futures in the fall and winter, knowing that when Klay came back – and if Curry and Draymond Green were healthy – this franchise would pick up where it left off two years ago. Add in “role players” like Andrew Wiggins and Jordan Poole and Denver could be in deep doo-doo even if Murray and Porter were playing.

The Nuggets finished the season sixth in the West, but besides roughing up the Warriors with a 3-1 head-to-head regular season record (Dubs didn’t have their Big 3 for any of those losses), Denver finished 3-11 SU against the likes of Phoenix, Memphis, Dallas and Utah. There’s a big divide in the Western Conference and Golden State is proving that in the postseason.

But, just in case I am missing something, I’ll take the Warriors to win outright at the discounted moneyline price and avoid a slim finish.

Did you know that if you parlayed today’s NBA Warriors vs. Nuggets predictions and picks in a single-game parlay, you could win $57.33 on a $10 bet? 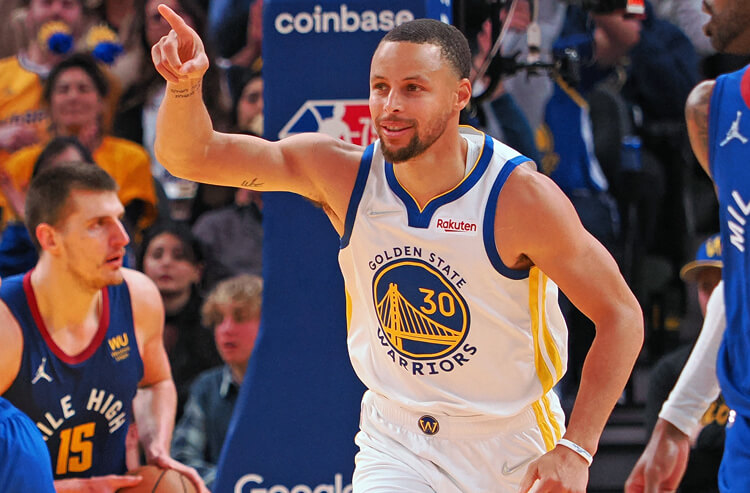