Phoenix is fully healthy and has a chance to book its ticket to the NBA Finals with a home win against the Kawhi-less Clippers in Game 5. And our NBA betting picks and predictions for tonight are expect the sun to set on L.A.'s season.

The Phoenix Suns host the Los Angeles Clippers in Game 5 of the Western Conference Finals on Monday night.

The Suns have a 3-1 series lead and would book their ticket to the NBA Finals with another victory. And oddsmakers are expecting exactly that with NBA betting lines installing Phoenix as 5.5-point chalk for this contest.

Here are our best free Clippers vs. Suns picks and predictions for NBA playoff basketball action on Monday, June 28, with tipoff at 9 p.m. ET.

Phoenix opened as a 6-point favorite late Saturday night at BetMGM Nevada, dropped to -5.5 Sunday morning and remained there until 6 p.m. ET today, when the line returned to -6. "Tickets are 2/1 Suns, money is pretty much dead even, a few more dollars on the Suns, but really close," BetMGM Nevada's Scott Shelton said at 6:45 p.m. ET. The total is seeing much more significant movement, now at 211.5 from a 215.5 opener. "Tickets 2/1 on the Under and money about 8/1 on the Under," Shelton said. "A lot of sharp play on the Under and on Clippers team total Under, which I just moved moved from 103.5 to 102.5, and it opened 104.5. All the moves are from today." Shelton added that BetMGM Nevada is a loser to both teams in Western Conference futures, though the book loses a lot less with the Suns. BetMGM is a winner to both teams in the NBA championship market.

The Suns are 20-8 ATS in their last 28 home games against a team with a winning road record. Find more NBA betting trends for Clippers vs. Suns.

The Suns held on for an 84-80 win in Game 4, although they almost squandered a massive first-half lead by mustering just 34 points in the final 24 minutes.

Two-time NBA Finals MVP Kawhi Leonard is out for Game 5 in Phoenix. The Clippers superstar forward hasn't played since June 14 due to a knee injury and they have really missed him during this series. The offensive burden has fallen to Paul George and when he hasn't gotten help from others like guard Reggie Jackson, the Clips offense has fallen off a cliff.

Meanwhile, the Suns recently got back their own superstar in point guard Chris Paul, who had to stay away from the Suns for 10 days following a positive COVID test. Paul is invaluable to Phoenix as a leader and distributor but he has struggled to get his shot on track, going just 11 for 41 from the field in two games since returning. That said, it's never easy to immediately jump back onto the court after an absence so expect to see CP3 return to his typical efficient self.

The Clippers have been very inconsistent during the postseason. They fell into a 2-0 hole in both the first round versus the Mavs and the second round against the No. 1 seed Jazz and then fought back to win both series. But it'll be even tougher to beat the Suns three times in a row, especially without their best player in Leonard.

With the Suns going 26-12 ATS in 38 games as a home favorite this season, back them to win and cover.

Saturday's low-scoring contest almost reminded us of the early-2000s battles between the Pistons and Spurs. Except instead of brutally tough defense in the paint it was two teams that simply kept missing from outside with the Suns and Clips combining to hit just nine of 51 shots from beyond the arc.

These teams have now cashed the Under in five of the last six meetings this season, including each of the last three games this series. The Clippers have played at the second-slowest pace in the league during the postseason and ranked 28th in the league in pace during the regular season.  The Suns didn't play much faster, ranking 24th in pace.

That slowed-down play, along with the additions of Paul and Jae Crowder, helped the Suns make massive strides on the defensive end of the floor, where they allowed 107.6 ppg at home — 5.8 ppg fewer than the previous year. They have played even better defensively during the playoffs holding opponents to 100.8 ppg on 42.2 percent shooting.

Without Leonard and his 30.4 points per game during the playoffs, the Clippers have really struggled offensively this series and have been held to 107 points or less in each of the last three games. That said, they've still been tough on defense and will likely play with even more intensity as they face elimination.

Suns center Deandre Ayton has really taken his game to another level during this series. The first-overall pick in the 2018 NBA Draft is starting to look like the stud he was expected to be when he came into the league. Ayton is coming off a massive performance in Game 4 where he scored 19 points and grabbed 22 rebounds in 41 minutes of action.

He has now scored at least 18 points in each game this series while shooting a sizzling 69.4 percent from the floor. Expect Ayton to once again exploit a Clippers interior defense that has looked vulnerable and take the Over on his points. 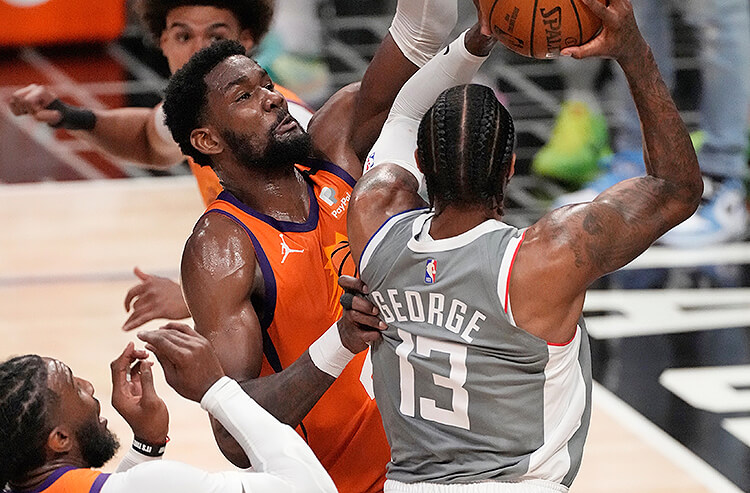