Bucks vs Hawks Game 3 Picks and Predictions: Atlanta Getting Points At Home Too Good To Pass Up

The Hawks were humiliated in Game 2 but are still tied 1-1 against Milwaukee with the series shifting to Atlanta. We love the NBA betting value on the Hawks as home dogs, as they are much better in the ATL — while the Bucks are much worse on the road.

After dropping the opening game of the Eastern Conference Finals, the Milwaukee Bucks had an emphatic response in Game 2, thumping the Atlanta Hawks to even the series at one game apiece.

The scene now shifts to Atlanta, where the Bucks are still NBA betting road favorites despite losing three of their last four contests outside of Milwaukee.

Can the Hawks brush off Friday's dud and hold court at home? Here are our thoughts in our Bucks vs. Hawks picks and predictions for Sunday, June 27, with tip-off set for 8:30 p.m. ET.

At 7:30 p.m. ET, an hour before tipoff, BetMGM Nevada has the Bucks -4.5, which is where the line opened before going up to -5 and receding to -4. "Tickets are just over 2/1 in favor the Bucks, and money is running 3/1 on the Bucks. So we need the Hawks small, but it wouldn't be a bad thing for us to get rid of the Hawks," Shelton said, alluding to the NBA championship futures market. Granted, it will take two more losses to knock out Atlanta, but BetMGM has significant liability to the Hawks winning the NBA title, including a $10,000 bet at +15,000 (150/1) to win $1.5 million. The total is at 224, from a 225 opener and 223.5 low point. "Tickets are dead even, literally one more ticket on the Over. Money is pretty much dead even as well, about $500 more on the Over."

The Hawks are 4-1 ATS in their last five games following an ATS loss. Find more NBA betting trends for Bucks vs. Hawks.

The bad news for the Hawks is they were completely embarrassed in Game 2, as Milwaukee used a 20-0 second-quarter run to essentially and the game by halftime (when they had a 32-point lead) and coasted to a 125-91 victory.

The good news for the Hawks is that games like that, even in the playoffs, are so laughably bad that you can just brush them off and focus on getting back on track in tonight's Game 3. Even better for Atlanta is it gets to play on its home court, where it is 26-15 this season — including covering the spread in 20 of its previous 26 games at State Farm Arena.

The Hawks are essentially down two key players, as De'Andre Hunter is out for the playoffs and Bogdan Bogadonic, although listed as a game-time decision, has averaged just 5.8 points per game in his last five since suffering a knee injury. That puts even more emphasis on superstar point guard Trae Young, who has averaged 31.6 ppg and 10.9 apg in Atlanta's nine postseason wins... compared to 25.6 ppg and 8.2 apg in the Hawks' five losses.

Considering Atlanta (and Milwaukee) were able to sit all their key players for the fourth quarter on Friday, it is coming into this game with a little extra rest. That should only help a Hawks team that is noticeably better at home in the playoffs, hitting threes at a 35.3 percent clip (compared to 29.3% on the road), while grabbing about four extra rebounds per game and committing almost five fewer turnovers, leading to a +4.9-point points difference at home compared to being away.

The spread is giving Milwaukee too much respect and seems a bit of an overreaction to Game 2's lopsided score. The Bucks were a Kevin Durant toenail away from losing four straight road games (and being eliminated), they're just 17-25 ATS on the road this season overall, and Atlanta coach Nate McMillan still inspires more confidence than Bucks' boss Mike Budenholzer.

We like the ATL to bounce back with a strong performance tonight and cover — especially at even money odds as a home dog.

The Hawks, despite all their flair and offensive depth, have now cashed the Under in five of their last six games. Atlanta's offensive depth is also starting to thin out as, mentioned above, Hunter is still sidelined and Bogdanovic is a shell of his former sharpshooting self. That's two of Atlanta's premier 3-point threats removed, and the Hawks are shooting just 28.3 percent from beyond the arc in their last five games — including 25 percent in the first two games of the ECF.

The Bucks have been erratic at best from deep, with six games shooting at least 34 percent as a team... and five games at 22 percent or worst. But what's haunting Milwaukee is a 70.6-percent efficiency from the free-throw line as it continues to leave free points on the table. This is again highlighted by Giannis, who is shooting just 56.2 percent from the charity stripe in the playoffs, although he is 9 for 12 through two games against the Hawks.

We're expecting the Hawks to up their defensive intensity at home tonight, while the Bucks have done a good job of locking in on the defensive end all playoffs long. Early betting action has backed the Under for Game 3 and we're inclined to follow that play.

One thing Milwaukee has been doing this postseason has been getting off to strong starts, holding a first-quarter lead in eight of 13 postseason games, including four of its previous five contests.

The Bucks own a +4.6-point differential in the opening 12 minutes of postseason play — the best number in the playoffs — while the Hawks have been a little sluggish with an average 1Q scoring margin of -1.5.

Atlanta has lost 7 of its last 8 opening periods and is 1-4 SU in the first quarter at home in the postseason. The Hawks will surely be fired up in Game 3 but it seems pretty clear that this group needs to get settled into each game, while the Bucks tend to stampede out of the gates.

Milwaukee has won each of the first two first quarters in the ECF and it wouldn't surprise us to see them have a lead after 12 minutes tonight either. 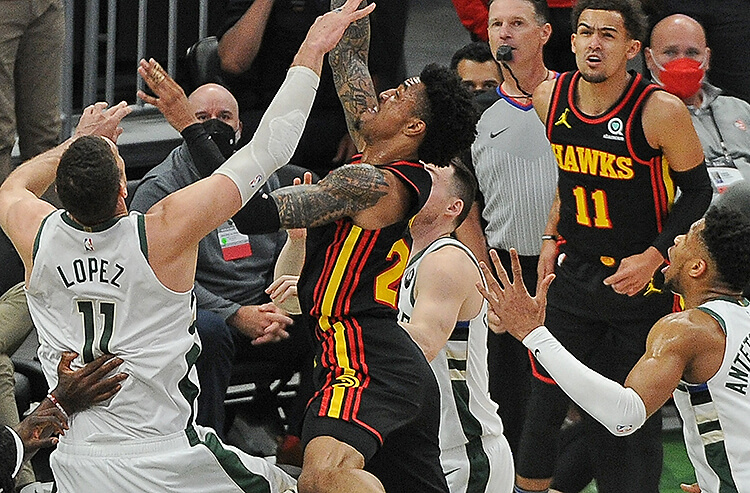 Bucks vs Hawks Game 3 Picks and Predictions: Atlanta Getting Points At Home Too Good To Pass Up
Provided by