The home team has been victorious throughout this series but if Giannis and the Bucks want to return to the Conference Finals, they'll need a win in Brooklyn. Can Milwaukee pull it off? Keep reading for our picks and predictions.

Players often dream about playing in a Game 7 during the playoffs, and that’s exactly what we’ll get when the Brooklyn Nets host the Milwaukee Bucks at Barclay Center on Saturday, June 19. This series has been extremely dramatic for a number of reasons, and you should expect some more twists and turns when these teams take the floor.

Will Milwaukee find a way to win a game on the road here? Keep reading for our free NBA betting Bucks vs. Nets picks and predictions to help you decide what to play in this epic showdown.

The Game 7 line jumped the fence at William Hill US's Nevada books, where the Bucks opened -1 late Thursday night, the number quickly went to pick, and it's Nets -2 at 5:30 p.m. ET today. "We're really high on the Nets. Straight bets, moneyline bets, parlays, moneyline parlays, everything is on Brooklyn. We need the Bucks big time," WillHill director of trading Nick Bogdanovich said. "We definitely want Milwaukee in the futures book, too." The total dropped from 217 to 215, then rebounded a point today to 216. "We're slightly high on the Over," Bogdanovich said.

The Bucks are 4-1 ATS in their last five road games against teams with winning home records. Find more NBA betting trends for Bucks vs. Nets.

The Bucks suffered one of the worst collapses in NBA history in Brooklyn in Game 5, forcing a must-win situation in Milwaukee in Game 6. Mike Budenholzer’s team answered the call in that one, winning by 15 points as a 5.0-point home favorite. The question is whether or not the Bucks have what it takes to beat a locked-in version of Kevin Durant twice in a row. For what it’s worth, the team does appear to be up for the challenge.

In Game 5, Durant had an out-of-body experience for the Nets, scoring 49 points on 16-of-23 shooting and also added 17 rebounds and 10 assists, while playing excellent defense. Yet, for as good as Durant was playing in that game, the Bucks would have won if they executed just a little better offensively. Then, Durant had 32 points in 40 minutes of action in a Game 6 loss, proving that Milwaukee can still win when he goes off.

The reality is that the Bucks are better off with Durant putting up stupid numbers than any of the Brooklyn role players stepping up and playing better than expected. That’s likely the reason why Budenholzer has opted not to send double teams at Durant. He wants everybody else to stay at home on their assignments, and the same goes for Giannis Antetokounmpo.

People have been calling for the former Defensive Player of the Year to guard Durant, but he’s better off as a free safety because of his ability to jump passing lanes and protect the rim. With that said, look for Milwaukee to continue to throw Khris Middleton and P.J. Tucker on Durant. The one adjustment that you should expect to see is Brook Lopez not dropping as much in pick-and-roll coverage. He gave Durant far too much space to hit mid-range shots in Game 5, but it was a bit better in Game 6. That will need to continue in the decider.

Offensively, the Bucks have to continue to trust their offense. Milwaukee runs into trouble when the team leans too heavy on isolation ball, which Budenholzer’s team learned the hard way in Game 5. The Bucks almost slipped up again in Game 6, as they briefly let the Nets back into the game. With everything on the line, expect this group to trust one another turn in a good performance. They’ve been through a ton over the last few years and that should make them stronger. It only helps that James Harden is nowhere near full health right now.

This was expected to be an extremely up-tempo series, as evidenced by the totals in the first three games being at 235.5 or higher. However, the teams have gone Under in five of the first six games, with the sixth being a push. Neither team has executed particularly well on the offensive end, and both of them are really digging in and focusing on keeping the ball in front of them.

With this being a win-or-go-home Game 7, the defense should only be better here. Also, there will be some nerves that lead to missed shots, as both of these teams know that every play is of the utmost importance now.

Antetokounmpo scored 30 points in a Game 6 victory, but he had 34 in each of the previous two contests. The Greek Freak was extremely efficient in Thursday’s game, shooting 12 for 20 from the floor. He made the most of his touches but it was really Middleton that carried the scoring load for the Bucks in that one.

However, Middleton scores a majority of his buckets with his jumper, and he could struggle a bit to get it going to the same extent on the road, With that, look for Milwaukee to lean a bit more on Antetokounmpo in this one. He has been getting to the rim at will in this series, and he’s going to continue to be aggressive. Antetokounmpo knows that he can really do wonders with his legacy by outplaying Durant in this game, and in many ways, the pressure is off now that this is a road game. People gave up on Milwaukee after Game 5, so the Bucks are almost playing with house money at this point. 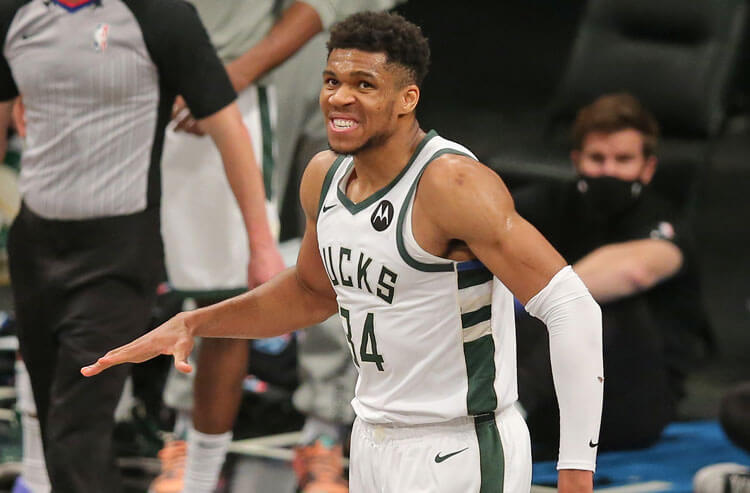 Bucks vs Nets Game 7 Picks and Predictions: Crossing the Bridge
Provided by