With an increase in lesser-known participants comes an increase in NBA betting value as we take a look at the 2022 NBA Dunk Contest. All four high-flyers have experience putting on a dunking show but we've got our eye on an underdog in our picks.

While it has drawn fewer big names recently, the Slam Dunk Contest remains the marquee of Saturday night at the NBA's All-Star Weekend, and with good reason.

It can be a place for legends to be born, like then-sophomore Zach LaVine putting on a show in Toronto, or for rising stars to announce themselves, like Donovan Mitchell's awesome rookie performance in 2018. No matter the field, the Dunk Contest is a must-watch spectacle.

Among this year's headliners are the Rockets' Jalen Green, the No. 2 overall pick in last year's draft, and Orlando's Cole Anthony, an endlessly charismatic interview and a rising bucket-getter. We'll break down the field for you here with our NBA Slam Dunk Contest picks and predictions for All-Star Saturday on February 19.

(Odds courtesy of FanDuel Sportsbook, however, they vary from book-to-book and so be sure to shop around for the best odds on your pick.)

We don't have a recorded vertical jump from Houston's rookie but we have plenty of evidence he can get up. It hasn't been a pleasant or even encouraging rookie year from Green, as he's averaging 14.6 points on 39% shooting, but he has delivered some thrilling in-game dunks.

Green also has prior experience, participating in the SLAM Summer Classic Dunk Contest in 2018. That contest saw him finish with an awesome off-the-wall, between the legs slam, but he would come second to Cassius Stanley, who participated in last year's dunk contest.

That four-player showdown showed off Green's ability to capitalize on his vertical with some impressive dunks but we'll only get an idea of his creativity under the lights in Cleveland.

Sophomore Obi Toppin is back for his second dunk contest in as many years. Toppin made his name as a prospect as a high-flying, powerful dunker at the University of Dayton, not far from Cleveland.

In last year's truncated dunk contest, Toppin scored a 48 after catching it off the bounce and delivering a reverse tomahawk dunk to start. He then followed it up with the popular move of dunking over people, vaulting himself over Julius Randle and his father to earn a 46. Those scores were enough to advance to the final, where he lost to Anfernee Simons after taking off from inside the free throw line and going through his legs.

Toppin's creativity was seemingly already tested in the final round last year, so it will be interesting to see what he tries in his second showing. We've previously seen that have a negative impact on participants, like Aaron Gordon's ill-fated drone dunk a year after his classic showdown with LaVine.

The shortest player among this year's participants, Anthony checks in at just 6-foot-2 but with plenty of hops. It's been a promising sophomore year from the former Tar Heel, as he's averaging 17.7 points per game and continues to be among the NBA's best interviews.

The Magic man also has prior success as a high-flier. As a high school hooper, Anthony won the City of Palms Classic slam dunk contest as he closed it out with a 49 and a 50, lighting the crowd up with a handful of impressive throwdowns. Anthony has just the right kind of confidence to enter the contest believing he's the baddest dude in the gym and then deliver on that self-belief.

With apologies to Draymond Green, we are not rocking with Juan T, the Slam Dunk Contest longshot. Golden State's pesky defender isn't without an impressive background, however, most notably delivering a thundering jam over Javale McGee earlier this season.

In Toscano-Anderson's winding journey to the NBA, he featured in back-to-back dunk contests in Mexico's LNBP, finishing second and then first. He's got the vertical and the length to execute pretty much any dunk he comes up with, and with both Steph Curry and Andrew Wiggins at All-Star weekend, he could go to the ever-reliable teammate-assisted-well.

The Slam Dunk Contest is about putting on a show, and one thing is an absolute lock: Cole Anthony is going to put on a show. What more could you want out of a Slam Dunk Contest pick? Anthony has the charisma and swagger, athletic chops, and as the son of former NBAer Greg Anthony, we could even see a nod to the past.

Anthony's title in the City of Palms Classic slam dunk contest showed off a little bit of everything and bodes well for Saturday. Among his contest-winning display was a 360 dunk off a lob from the side of the backboard, an off the bounce between his legs jam, another through the legs jam — after leaping over someone and taking the ball from them — before closing it out with an epic reverse windmill off the glass.

The sophomore guard could put up a 50 in each attempt and yet, the real show might just come after he's crowned and given the microphone. Don't miss the value in taking Anthony, and don't miss his victory speech. 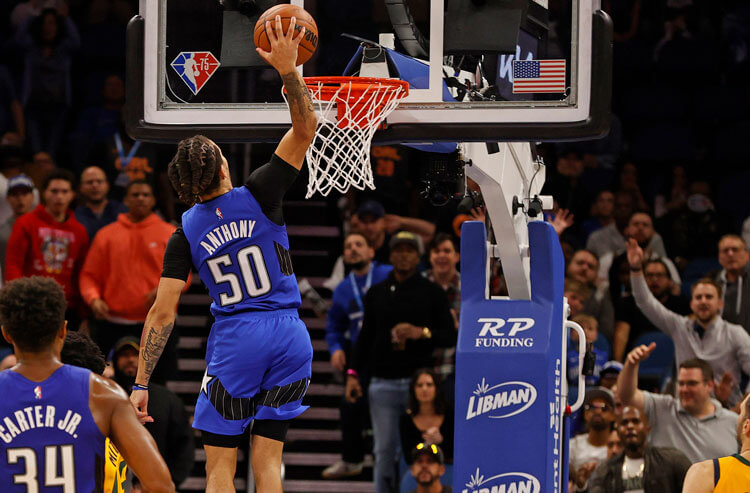