The Skills Challenge returns with a new format this year — one that puts the competition's final in a strangely high-variance balance. Find out why the favorites could easily be upended with our NBA betting picks for All-Star Saturday.

The Skills Challenge has been reanimated for 2022 with an entirely new team-based format that the league hopes will be more enticing than the obstacle course players had half-heartedly slogged through in years past.

Whether they succeeded in that venture — between the questionable new format and some hilariously-assembled teams — remains very much to be decided.

In any event, here are our Skills Challenge picks and predictions for NBA betting on All-Star Saturday, February 19.

(Odds courtesy of FanDuel Sportsbook, however, they vary from book-to-book, so be sure to shop around for the best odds on your pick.)

While they bring the least experience to this competition (like that matters), Team Rookies has by far the most well-rounded skillset in the inaugural running of the new Skills Challenge, and is rightfully billed as an odds-on favorite.

The Rookies' main asset is their fluidity and low floor. Each of Scottie Barnes, Cade Cunningham and Josh Giddey already has a balanced range of abilities that isn't extremely deficient in any one area of this contest. The Rookies are arguably prohibitive favorites in each of the three first-round events, particularly Team Shooting, where they're a near-lock.

Team Cavs has the advantage of playing with each other every night, while also, at least in a general sense, having the most talented trio of players, including two All-Stars and the runaway Rookie of the Year odds favorite.

The bad news for Team Cavs is that one of the first-round events is shooting, and two of their players are utter liabilities for the long-range shots they'll be forced to take. While Mobley and Allen are both excellent passers for their size, the former is hitting just 26% from deep, while the latter has made all of one 3-pointer this season.

Discredit any supposed "home-court edge" the Cavs might have. The vast majority of tickets for this thing go to league personnel, media, and corporate sponsors, so the presence of actual Cleveland fans will be heavily diluted.

Expanding on the above point about shooting, the league has, for some reason, given Giannis Antetokounmpo — who, despite being a two-time MVP, is a notoriously poor shooter outside the paint — his own freaking family team. And guess who else can't shoot?

Thanasis, Giannis' Bucks teammate, has shot just 11 threes all season, making one of them. Alex is, statistically, the best gunner on the team, but his 45.5% for the G-League's Raptors 905 comes on a minuscule sample size (1.1 3PA over 10 games) and could easily be chalked up to good variance.

The Antetokounmpos will have long strides in the relay event, but are dead money in shooting, and probably the biggest dogs in the passing event as well.

So, in what has to be one of the most poorly thought-out concepts the NBA has introduced for All-Star Saturday night (and there have been lots of them, RIP The Wheel), this entire contest will come down to which team can make a half-court shot faster.

Yes, the "Skills Challenge" will be decided by a "skill" that, despite Damian Lillard and Steph Curry's efforts, is irrelevant on just about 99% of NBA possessions.

We're pretty sure Team Antetokounmpo won't be here, so what this really becomes is:

a) Whether the best shooter in this competition (Darius Garland) can knock down a halfcourt shot flanked by two awful shooters faster than than the three average-ish shooters on Team Rookies, and

b) Whether the fairly large difference in price is enough to combat the perceived margin.

It's tough to figure, but a half-court shot to decide this contest is such an insane and high-variance proposition that it's really tough not to side with the better price. From that distance, the margins become fairly thin, and it's not as easy to give any one player a huge edge.

Picking up 2.4 units for a Cavs win would be a lot sweeter than a minus-money route with Team Rookie. In a different format, we'd find it hard to argue going chalk, but the league is essentially throwing this in a blender for a final round that could really go either way. Give us Team Cavs. 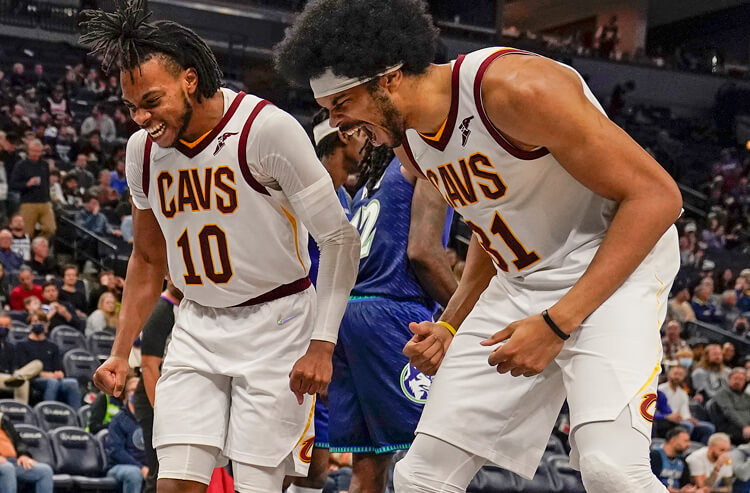