76ers vs Wizards Game 4 Picks and Predictions: Sixers Post Game Is Just Too Much for the Wiz

Joel Embiid has been a nightmare in the post against Washington, averaging 58 points in the paint per game and shooting 68 percent from inside eight feet of the basket.

The Philadelphia 76ers have used their size and stingy defense to siphon the jet fuel out of the Washington Wizards in their Eastern Conference quarterfinal series, with the Wizards running on fumes heading into Game 4 on Monday.

The 76ers hold a commanding 3-0 lead in the NBA Playoffs series and have won the past two games by a combined 54 points, easily covering the NBA betting spreads. Bookies have Philadelphia pegged as a large road favorite for Tuesday, giving 8.5 points inside Capital One Arena.

Here are our free NBA picks and predictions for 76ers vs. Wizards on May 31.

The 76ers are 8.5-point road favorites at DraftKings Sportsbook as of 5:30 p.m. ET as they try to close out the series with a sweep. Bettors are heavily backing Philadelphia on the spread, with 91 percent of the handle and 89 percent of bets coming in on the Sixers. The O/U stands at 230.5, with 63 percent of both the handle and total bets on the Over.

The Sixers have manhandled the smaller Wizards in this series, dominating inside with an average of 58 points in the paint and shooting a blistering 68 percent from inside eight feet of the basket. Philadelphia’s post-up attack, anchored by star center Joel Embiid, owns a scoring frequency of 63 percent and has sucked all the energy out of the Wizards’ up-tempo attack.

With the Sixers getting to the rim with ease, they have flattened Washington’s vaunted transition offense and slowed this series down, at least compared to the pace the Wizards want to run. Washington closed the 2020-21 campaign with a pace rating of 104.31 in the final month and a half of the schedule but has had the hand break pulled versus the 76ers with the series boasting a pace of only 100.5.

Those blowout wins in the last two games have allowed Philly to rest its talent-rich lineup as the Sixers starters have had to play just an average of 28.9 minutes per game through three contests. Washington, on the other hand, has leaned heavily on Russell Westbrook and Bradley Beal, with the pair playing 34:11 and 37:21 minutes in Game 3, respectively.

Both guards have been battling injuries in recent weeks (Westbrook questionable for Game 4) and their shooting numbers in Saturday’s 132-101 loss indicate that the legs are getting heavy, as the Sixers’ bigger guards are wearing them down. Westbrook and Beal scored 51 combined points on 19-of-44 shooting (43%), including a 4-for-14 effort from beyond the arc. The rest of the Wizards went 19 for 52 from the field (36.5%) and 4 for 21 from distance.

The Sixers, on the other hand, had all five starters score in double figures on Saturday and have shared the star load over the course of the three games so far, with Embiid, Ben Simmons and Tobias Harris all taking turns at the wheel of the offense.

This spread opened -7.5 and has jumped to -8.5 with one-sided action on the 76ers — and for good reason — with over 90 percent of tickets and handle riding on the road favorites. If you’re betting on Philadelphia, get it as low as you can. There’s no quit in Westbrook and Beal, so don’t expect Washington to just pack it in. If this line flirts with double figures before tipoff, no one would blame you for walking away.

Even with the Wizards posting scores of 101 and 95 the past two games, the big issue is defense. Whether or not the undersized Wiz can do something about it on that end of the floor is another thing.

The Sixers’ size, particularly on the perimeter, has forced forwards like Rui Hachimura to match up on Simmons or Harris, pulling one of Washington’s rare effective forwards away from the paint and giving plenty of space to Embiid.

Allowing Embiid to have his way around the hoop not only kills Washington on defense but also slows it down on offense, as the Wizards have to start the bulk of possessions by inbounding the ball — not turning quick in transition off a miss or turnover. When the Wizards do get to pick up the pace and attack the rim, Philadelphia has “The Process” protecting the paint and changing shots, as well as lengthy guards like Simmons taking up a lot of space.

Neither team is a threat for big numbers beyond the arc, with Philly making an average of only 12 triples in the series and Washington hitting six per game on 23 percent shooting from deep, which means this game will be won and lost in the paint.

The Game 4 total has topped the 230-point plateau and the Sixers — one of the top defenses in the NBA — have gone 2-6 Over/Under versus totals of 230 points or more this season.

While Philadelphia isn’t burying opponents under a monsoon of triples, guys like Seth Curry and Danny Green keep the defenses honest with their outside touches.

The pair shot a combined 8 for 15 beyond the 3-point arc in Game 3, even with Washington pressing those shooters and trying to get them to dribble the basketball. Washington was too slow to close out when the ball went from inside to the wings and it will likely need to pick its poison on the defensive end tonight.

Inconveniencing Embiid inside solves more issues and the Wizards will have to live with the Sixers shooting from deep. That means more space for guys like Green, who has posted point totals of 11, five and 15 in the three games so far. With his Game 4 point total below 10, it will only take a few triples to help him get Over that prop. 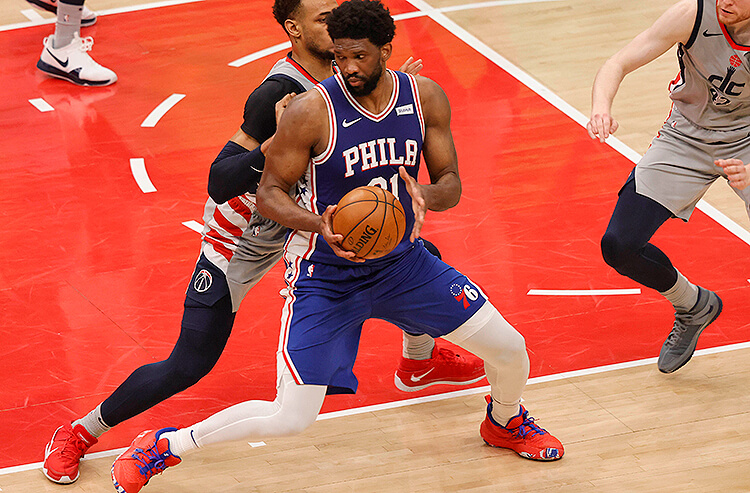 76ers vs Wizards Game 4 Picks and Predictions: Sixers Post Game Is Just Too Much for the Wiz
Provided by