Suns vs Lakers Game 4 Picks and Predictions: Sundown at Staples

While LeBron James still did not top 25 points in Game 3, his eighth straight game going below, he dominated in a resurgent Lakers performance.

The Los Angeles Lakers and Phoenix Suns will collide in a pivotal Game 4 on Sunday, with L.A. threatening to take a commanding 3-1 series lead back to the desert.

Can Phoenix pull level and return home in a tightly contested series? Find out in our best free NBA betting picks and predictions for Suns vs. Lakers on May 30 at 3:30 p.m. ET.

The Under is 3-1-1 in the last five meetings between Phoenix and Los Angeles. Find more NBA betting trends for Suns vs. Lakers.

The Suns have to be asking themselves what could have been. One of the NBA's best regular season teams, both in their record SU and ATS, received the misfortune of facing LeBron James — despite finishing as the No. 2 seed in the Western Conference. While they were not completely written off, with Chris Paul and Devin Booker having meshed their games terrifically, the mismatch between Anthony Davis and Deandre Ayton was obvious.

Game 1 saw Ayton dominate the matchup, while Davis completely shrunk. Unfortunately, that coincided with Paul's shoulder injury that has now become the story of the series. The Point God is clearly not himself and as a result, neither is Phoenix.

While Booker continued to ascend in 2021, it was Paul who orchestrated everything. Paul finished in the Top-10 in the league in offensive win shares and assist rate, while easily leading his own team in offensive box plus/minus, win shares and VoRP. Cam Payne has enjoyed a fairly charmed series attempting to fill in for Paul for extended stretches, but an assist-to-turnover rate of two and a plus-minus of 0 is indicative of his total impact.

With Paul a shell of himself, the Suns, too, have retreated into their shell — looking every bit the young team without their leader that they are. With the Suns' gut-punch coinciding with James coming to life in Game 3 and the Lakers starting to resemble the fun-loving, free-flowing team that rolled to the title in the bubble last year, we cannot bet against King James and the reigning champions on their home floor.

Despite consistently low totals in this series, between 211-214 in each game, the two teams have gone 0-2-1 O/U. While Game 3's Under was aided by both teams shooting below 50 percent from the field, there's little reason to expect the trend in this series to change.

Phoenix's field goal percentage, as a team, is down nearly 4 percent from the regular season (49 percent to 45.2), while L.A.'s is down from 47.2 to 44.2. The Suns haven't been able to count on the famously streaky Jae Crowder who, after shooting 38.9 percent from 3-point range on 6.3 attempts per game in the regular season, is 2 for 20 in this series. Similarly for the Lakers, Kentavious Caldwell-Pope, who led the team in 3-point percentage during the regular season, has been rough from beyond the arc, canning 1 of 13 attempts.

With Paul's shoulder completely derailing his postseason, James and L.A. have been free to craft the matchup to their liking. That means slow, deliberate pace, a lot of operating in the halfcourt and, as has become their calling card, a focus on defense for the Lakers.

The Lakers' recipe will be enough for them to take a 3-1 series lead, and for us to continue to count on the Under.

While James has now gone nine straight games without topping 25 points, his Game 3 performance was his most encouraging in weeks, despite a relatively modest 21-point output.

LeBron was in full control, dictating the game both in transition and the halfcourt, and finished as a team-high +15 on over 50 percent shooting from the floor.

While James is the master of pacing himself early in the postseason, it's just a matter of time until he explodes offensively. With Davis hobbled by a knee strain and 'Bron eager to wrap this series up as soon as possible to get ample rest between rounds, count on James to lead the Lakers in Game 4. 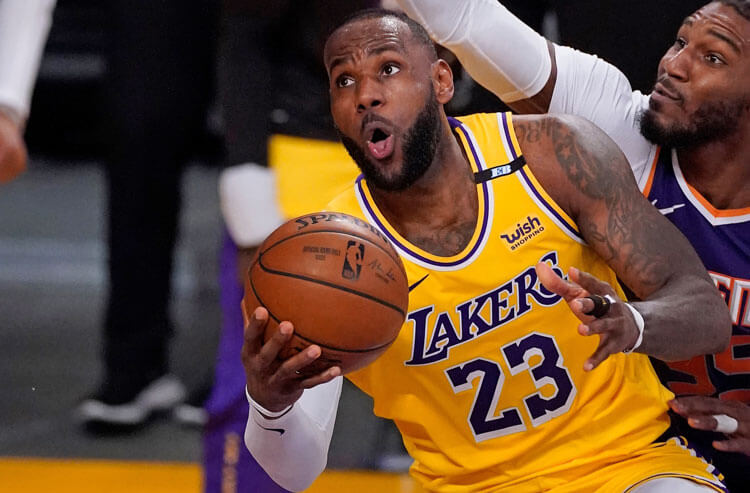 Suns vs Lakers Game 4 Picks and Predictions: Sundown at Staples
Provided by