76ers vs Mavericks Picks: Who Will Have Gas Left in the Tank Come the 4th Q?

The Philadelphia 76ers wrap up their four-game road trip in the Lone Star State, taking on the Dallas Mavericks on Monday night.

The Sixers have won two of the first three games on this trek, most recently an impressive 117-93 victory at Oklahoma City in which they covered as 10-point NBA betting favorites Saturday. The Mavericks, on the other hand, must quickly shake off a rough home loss to San Antonio, falling 119-117 on a last-second shot Sunday—Dallas’ second defeat in the past three games.

Here are our free NBA picks and predictions for 76ers vs. Mavericks on April 12.

TwinSpires pegged Philadelphia a 2.5-point favorite at the outset and is up to -3 as of 4:45 p.m. ET. Ticket count is almost dead even, at 51 percent for the 76ers, while the Mavericks are actually getting 62 percent of cash. The total is stable at 218.5, with the Under netting 54 percent of tickets and 55 percent of money.

The Under is 20-7 in Mavericks' last 27 games as underdogs. Find more NBA betting trends for 76ers vs. Mavericks.

The Mavericks get an immediate chance to rid themselves of the nasty taste left over from Sunday’s loss to the Spurs but very little time to rest the weary legs of their starting lineup. Dallas has leaned on its first five hard in recent games, with starters playing an average of 32.5 minutes per contest over the Mavs’ last 10 outings.

Sunday’s battle with state rival San Antonio saw four of Dallas’ starting five play more than 35 minutes each, including Herculean efforts from Kristaps Porzingis and Luka Doncic, who combined for 60 of the Mavs’ 117 total points (51%).

The youthful Sixers throw a lot at opponents with five active players averaging double figures in points and all of those talents capable of putting up 20-plus in a game. Philadelphia had six players cross the double-digit mark in the blowout win over the Thunder and got 43 collective points off the bench, as Doc Rivers rested his starters in the final frame.

Philadelphia center Joel Embiid has shown little rust after returning from a scary knee injury in mid-March, posting an average of 25 points and eight rebounds per game in his four efforts back in the lineup. Embiid, who is pushing for NBA MVP (+390 second overall in MVP odds), loves to rise to the challenge against other elite players and will look to show up Doncic and Porzingis with a big win Monday.

Philadelphia’s offense runs inconsistently at times, such as Friday’s loss at New Orleans in which the 76ers managed only 94 total points on 42 percent shooting with 19 turnovers. Even in Saturday’s bounce-back performance against OKC, Philly didn’t shoot from distance particularly well and is just 32 for 93 (34.4%) from 3-point range during this current road swing.

Luckily, the Sixers’ defensive efforts are reliable. Philadelphia, which ranks Top 10 in most major defensive categories, has held its last three foes to point totals of 93, 101, and 97 (all staying Under the total) and checking those opponents to 46 percent shooting from the field, including a 34 percent clip from outside.

The Mavericks are reliant on the three-ball, attempting an average of more than 38 triples per contest and drumming up 37 percent of their total offensive output from beyond the arc. Dallas could get some perimeter help in the form of veteran sharpshooter J.J. Reddick (game-time decision) but all those additional minutes and playing on the second night of back-to-back games will leave the legs heavy and have those long-range looks coming up short.

In addition to the short turnaround, Dallas star Luka Doncic faces one of his toughest matchups with versatile Sixers guard Ben Simmons drawing the assignment of shutting down the Mavs’ top gun. Simmons, at a fleet-footed 6-foot-10, gave the 6-foot-7 Doncic troubles when these clubs collided in Philadelphia back on February 25.

Luka finished that game with only 13 field goal attempts, cashing in six of those along with four of six makes from the foul line for just 19 total points and a minus-20 rating in the one-sided 111-97 loss to the 76ers (without Porzingis). Simmons also helped forced seven turnovers from Doncic—a good chunk of the 18 total turnovers from Dallas in that contest.

Doncic is scoring 25 points per night this month while averaging almost 23 field goal attempts over those six games. He’ll have to work extra for those looks against Simmons’ smothering defense Monday night. 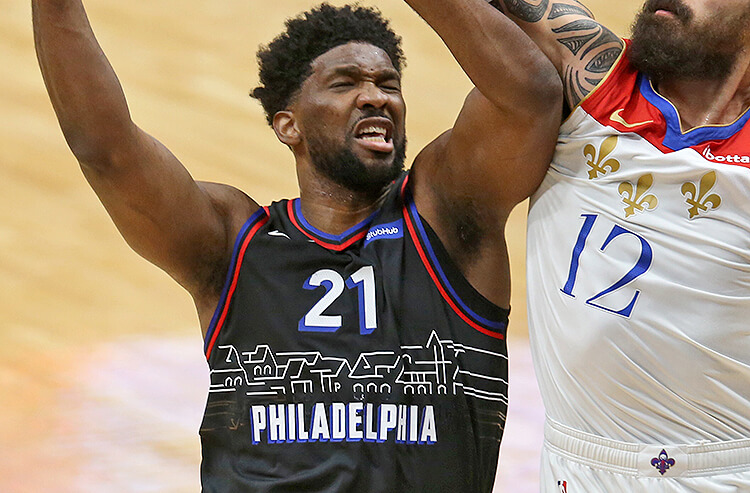 76ers vs Mavericks Picks: Who Will Have Gas Left in the Tank Come the 4th Q?
Provided by