Two flawed MLS sides will clash in Georgia on Saturday, as an injury-devastated Atlanta United team hosts the Seattle Sounders. Between Atlanta's shorthanded squad and the Sounders' road woes, our MLS picks expect a deadlock.

The Seattle Sounders are holding on to seventh place in the Western Conference and look to turn their road fortunes around as they visit struggling Atlanta United on Saturday.

Atlanta and Seattle have played each other only once in the last three years, a 1-1 draw in May 2021. Three of the four meetings between the sides ended in a deadlock, with Seattle taking the only win, a 2-1 victory in July 2019.

With the cross-conference foes facing off again, check out our MLS betting picks and predictions for Atlanta United vs. Seattle Sounders, with kickoff on August 6.

It’s going to be a hot and sunny day in Atlanta for the afternoon contest, with temperatures expected to exceed 86F at kickoff. Though unlikely, there is a slight chance of precipitation. Humidity will be about 65 percent and light winds of 6 mph shouldn’t impact proceedings.

Seattle has lost three in a row and four of its last five on the road, all by a single goal. Brian Schmetzer’s side has lost seven of 11 contests away from home. Only three teams — Houston, Charlotte, and Kansas City — have lost more.

Just one of those seven defeats was by more than a single goal. While the Sounders clearly aren’t being comprehensively outplayed on their travels, Schmetzer won’t take any consolation in his team’s ability to keep it close.

If the Sounders are to secure a playoff berth, they’ll need to start getting something out of their narrow road defeats. The Sounders’ main issue on the road is their inability to create enough offense. They’ve scored just 10 goals in 11 away matches, the joint-fewest in the Western Conference.

The Sounders have won two of their last three games overall and, despite their poor road record, should enter Saturday’s contest against Atlanta with optimism and promise. Riddled by injury and tormented by a poor run of form, Atlanta is reeling toward the bottom of the Eastern Conference.

The Five Stripes have a single win from their last eight matches, a dreadful stretch that includes four losses. Gonzalo Pineda’s side failed to score in three of those eight games, further adding to Atlanta’s mountainous list of woes.

Pineda is without his two first-choice goalkeepers, as both Brad Guzan and Dylan Castanheira suffered season-ending injuries. Rocco Rios Novo was thrown into the spotlight on June 19 against Inter Miami. His MLS debut went well, as Atlanta defeated Inter Miami 2-0 at home. Beginner’s luck ran dry for the 20-year-old, who has won just one of eight matches since, a 2-1 home win over Real Salt Lake on June 13.

Pineda will have seven or eight regulars unavailable when the Sounders come knocking. Seattle will look to capitalize on Pineda’s walking wounded, while Pineda will look to his team’s solid home record as a stabilizing force.

Along with three other teams, Atlanta has the fifth-best home record in the Eastern Conference and has only lost one of the last four at home. It’s an immeasurably better side in front of its vociferous partisan fans.

However, Seattle can ill-afford to let an opportunity against such a depleted team slip. The fact the Sounders are fighting for their playoff lives, combined with Atlanta’s litany of personnel issues, should result in Seattle escaping with a share of the spoils.

Look for the match to end deadlocked at one.

Eight of Atlanta’s 11 home contests have resulted in the Over. However, the last three matches at Mercedes-Benz Stadium have seen fewer than three goals. The Five Stripes, thanks in large part to their laundry list of injuries, have managed only six goals in their last five home matches.

Expect the recent Under trend to continue against one of the strongest away defensive sides in the Western Conference. Seattle has conceded 14 goals in 11 away contests, the third-fewest in the conference. They also have monumental difficulties mustering offense on their travels, scoring just 10 goals in 11 games.

Six of the Sounders’ seven recent away matches have resulted in less than three combined goals, fortifying the Under play.

Seattle hasn’t shown enough on the road to warrant a victory. However, Atlanta is plagued by injuries and probably won’t have enough offensive prowess to pose continuous problems against a sound Seattle defense.

The Sounders are overdue for an away draw. You’d have to go back to March 20, a match in Austin, to find the last time they tied on the road. That match ended in a 1-1 draw. Look for the same result in Atlanta on Saturday. 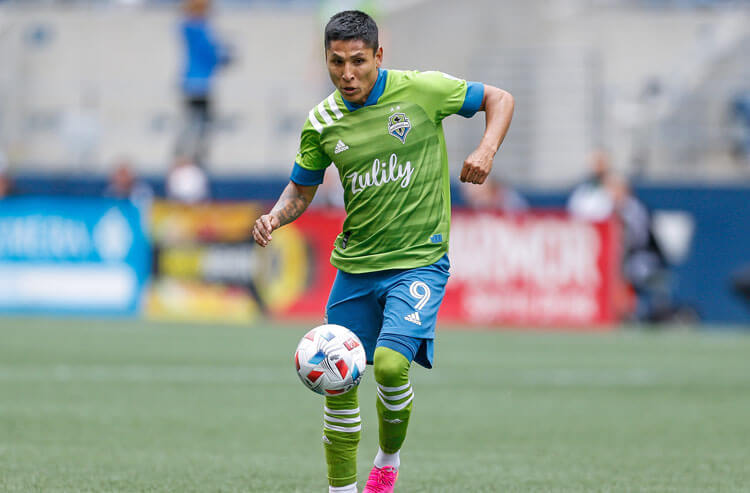