The New York Yankees finally broke out of their scoring slump with a 6-3 win against the Cleveland Indians last night and will be looking to repeat that success on Friday in the second game of their series.

Oddsmakers expect the Yankees to win again with MLB betting lines installing New York as a -150 favorite with an Over/Under of 8.5.

Here are our best free Yankees vs. Indians picks and predictions for Friday, April 23, with the first pitch at 7:10 p.m. ET.

Jordan Montgomery (1-1, 4.24 ERA): Montgomery is coming off a six-inning performance against the Rays where he struck out seven and allowed just two hits. Unfortunately, both hits were two-run homers, so he surrendered a total of four earned runs and received a big L for his efforts.

Logan Allen (1-2, 4.50 ERA): Allen was roughed up for five runs (three earned) before getting the hook after just two innings in his previous start last Friday.

The 23-year-old came over in the Trevor Bauer trade, and while he isn't overpowering, he has a solid arsenal of pitches and looked very sharp in the preseason, allowing just one run and nine hits through 14 innings.

Cleveland is 6-25 in its last 31 games as an underdog. Find more MLB betting trends for Yankees vs. Indians.

While a six-run performance might not seem that impressive, it was much-needed for a Yankees squad that has been brutal at the plate this season. That said, Cleveland has been just as bad at the plate, ranking 27th in the majors with a batting average of .210 and plating just 3.91 runs per game.

When you look at the recent history of both teams, the Tribe have been a low-scoring team for the last few years while the Yankees are typically one of the best hitting teams in the majors.

New York sluggers like Aaron Judge, Giancarlo Stanton, and Gary Sanchez have a proven track record for mashing, while DJ LeMahieu has a combined batting average of .336 over the last two years.

We're expecting the Bronx Bombers to get back on track eventually, while Cleveland's hitters could be mired in mediocrity for the rest of the season.

Yankees starter Jordan Montgomery is coming off a shaky outing, but his analytics have looked great this season, as he has a 0.88 WHIP while his hard contact rate of 30.2 percent ranks eighth among all qualifying pitchers according to Statcast.

With the Yankees 4-0 in the last four meetings between these teams in Cleveland, back them on the moneyline.

While neither starting pitcher has been great, they have both flashed potential and both happen to be southpaws.

Both teams have been absolutely brutal against left-handers this season, with the Yankees ranking 25th in the majors with an OPS of .651, and Cleveland batting .208.

Both New York and Cleveland also have terrific bullpens. Yankees relievers have pitched to a major-league best 2.19 ERA with a WHIP of 0.99 and an opponent batting average of .183. And the Tribe relievers are sixth in the majors with an ERA of 3.29.

Although the Yankees scored six runs last night, that was the first time they had plated more than four runs in a game since April 11. They have now gone 13-6 to the Under in their last 19 games overall while Cleveland is 9-4 to the Under in its previous 13 games against a left-handed starter. Take the Under. 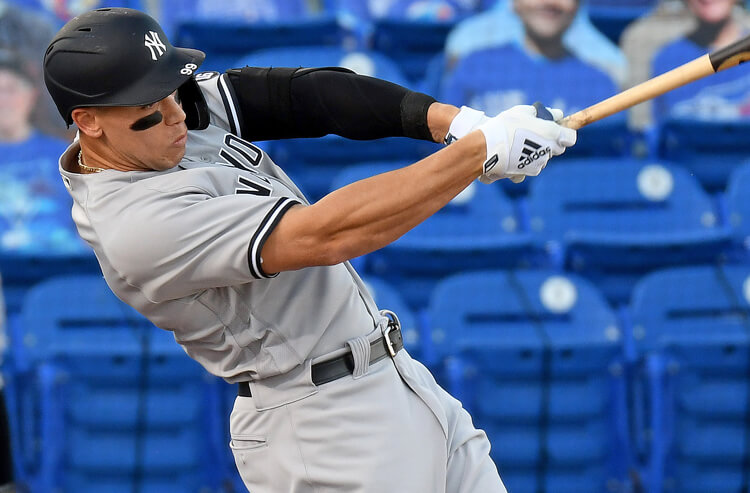 Yankees vs Indians Picks: Backing the Bombers
Provided by