Yankees vs Braves Picks and Predictions: Braves Should Pounce on Heaney

New York and Atlanta were on a collision course, both on similar season arcs and streaking into a head-to-head series. The Bombers took the opener — find out if ATL can even the score as we break down our Yankees vs. Braves picks.

The MLB betting board for Tuesday is headlined by a clash between two of the game's hottest teams, as the Atlanta Braves host the New York Yankees in interleague action.

This will be the second contest in a two-game set at Truist Park in Atlanta, and after a 5-1 Yankees win on Monday, oddsmakers are expecting the home side to bounce back, installing the Braves as -135 favorites tonight.

Here are our best free Yankees vs. Braves picks and predictions for Tuesday, August 24.

Andrew Heaney (8-8, 5.51 ERA): Heaney was acquired by the Yankees at the trade deadline and has been just as erratic with his new team, surrendering 16 earned runs and nine home runs in 22 innings with New York. That said, he's coming off one of his best performances of the season, holding the Red Sox to two hits and one run across seven innings last Wednesday.

Charlie Morton (12-4, 3.47 ERA): The two-time All-Star has been very effective for Atlanta this season, pitching to a 1.09 WHIP with an opponent batting average of .209 across 25 starts. The 37-year-old has really settled into a groove this month, logging exactly six innings and allowing two runs or fewer in each of his four starts.

Yankees: Gio Urshela 3B (Questionable), Michael Andujar (Out), Aroldis Chapman RP (Out), Gio Torres SS (Out), Aaron Hicks OF (Out).
Braves: Ronald Acuna Jr. OF (Out), Marcell Ozuna OF (Out), Travis d'Arnaud C (Out).
Find our latest MLB injury reports.

The Braves are 21-7 in their last 28 games following a loss. Find more MLB betting trends for Yankees vs. Braves.

Both of these clubs have had similar trajectories this season. The Braves entered the season as the favorites to win the NL East, but were just 52-54 three weeks ago and season-ending injuries to MVP candidate Ronald Acuna Jr. and top pitcher Mike Soroka appeared to seal their fate. But then the Braves caught fire and have won 16 of their last 19 games to take over first place in the division, with their loss to the Yankees last night snapping a nine-game winning streak.

The Yankees came into the year as World Series favorites in the American League but struggled to break .500 during the first half of the season. However, they have won 22 of their previous 27 contests to take over the top spot in the AL Wild Card race with a 73-52 record.

Both squads have been hitting the ball well lately with the Yankees boasting an OPS of .801 over the last two weeks and the Braves racking up an OPS of .788 over the same time frame.

Andrew Heaney will get the start for the Yankees, and while the southpaw is coming off a strong outing against Boston, he's been very unreliable with a 5.51 ERA with a 1.59 WHIP in 22 starts this season.

The Braves will send Charlie Morton to the mound, and he has been much sharper on the year, especially during the month of August where he has a 2.25 ERA with a 0.83 WHIP across four starts. With both teams in great form, we're siding with the home side and the superior starter.

Heaney has the stuff to make batters miss, as indicated by his 135 strikeouts in 116 innings this year. But when he gets hit, he gets hit hard, ranking second-last in the majors among all qualified pitchers when it comes to average distance on batted ball events and surrendering 25 home runs, more than all but six pitchers.

That's bad news against an Atlanta lineup that is third in the majors with 1.46 home runs per game and has upped that number to 1.8 HR/game over the last four weeks.

Over that span, the Braves are plating 5.68 runs per game, while the resurgent Yankees are averaging 5.45 runs per game during the month of August. Take the Over. 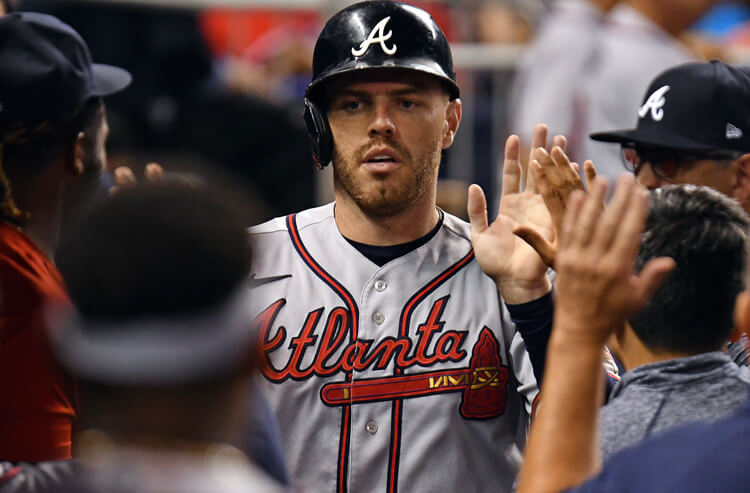 Yankees vs Braves Picks and Predictions: Braves Should Pounce on Heaney
Provided by