Dodgers vs Padres Picks and Predictions: Can Padres Punch at the Plate?

The Friars are hoping to gain ground on L.A. in this NL West showdown series. But with stud Julio Uiras on the mound against a lineup struggling at the plate, our Dodgers vs Padres picks reveal that may be easier said than done.

The final game on the MLB betting board for Tuesday is an NL West clash between the Los Angeles Dodgers and San Diego Padres. This will be the first contest in a three-game set at Petco Park in San Diego and the Dodgers opened as -166 away favorites with the Over/Under installed at 9.

Here are our best free Dodgers vs. Padres picks and predictions for Tuesday, August 24.

Julio Urias (13-3, 3.29 ERA): Urias is expected to pitch for the first time since suffering a calf contusion against the Mets two weeks ago. He looked stellar in that outing, allowing just two hits across five scoreless innings. The 25-year-old has been very effective this season pitching to a 1.07 WHIP with an opponent batting average of .229 through 139 2-3 innings.

Pierce Johnson (3-2, 2.49 ERA): The Padres relief pitcher will start his first career MLB game tonight and serve as the opener. The right-hander has pitched to a 1.18 WHIP with 60 strikeouts in 43 1-3 innings out of the bullpen this season.

The Dodgers are 7-1 in their last 8 road games. Find more MLB betting trends for Dodgers vs. Padres.

The Padres have owned the head-to-head series recently, winning seven of the previous eight meetings but a lot has changed since these divisional rivals previously played against each other on June 23.

The Padres have been decimated by injuries to their rotation, going just 2-9 in their last 11 contests to fall one game below the Reds for the final Wild Card spot in the National League. The Dodgers have won 13 of their last 15 games to improve their record to 78-47.

Those pitching injuries have really hurt the Padres, who have collectively pitched to a 4.85 ERA with a 1.36 WHIP over the last 30 days. The Dodgers also have a banged-up rotation with Julio Urias, Clayton Kershaw, Tony Gonsolin, and Trevor Bauer all missing time over the last few weeks, but they have more overall depth and are getting quality performances from the rest of their staff.

It appears like Urias will get the start tonight as he is listed as probable after being placed on the 10-day injury list after suffering a calf injury against the Mets on August 13. The 25-year-old has been very sharp lately, pitching to a 1.59 ERA over 22 2-3 innings in his last five starts.

The Dodgers have also been much more effective at the plate lately, ranking ninth in the majors with an OPS of .772 over the last 15 days.

The Friars should have gotten a boost from the return of MVP candidate Fernando Tatis Jr., but the slugger is just 1-14 at the plate over his last four games and the Padres are just 25th in the majors with an OPS of .669 over the previous 15 days. Take the hotter team and back the Dodgers on the moneyline.

The Under has gone 5-1-1 in the Dodgers' last seven games while going 5-1 in the Padres' previous six contests.

San Diego has really struggled at the dish lately, plating just 3.36 runs per game over the last 11 games. The Padres have also been awful against left-handed pitchers like Urias all year, ranking just 24th in the majors with a slugging percentage of .395 against southpaws. 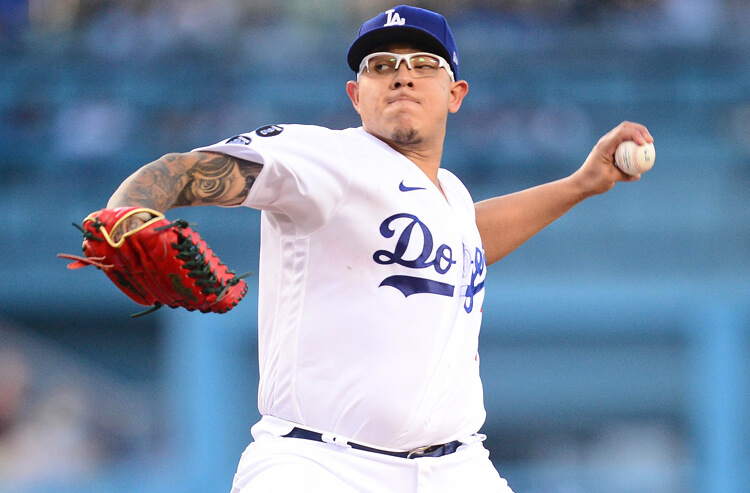 Dodgers vs Padres Picks and Predictions: Can Padres Punch at the Plate?
Provided by