With a full slate of MLB action on the calendar, we've got plenty of player props to choose from. We're going with a variety today, focusing on a total bases number, a sprinkle of stolen base value, and taking the Under on a strikeouts total. 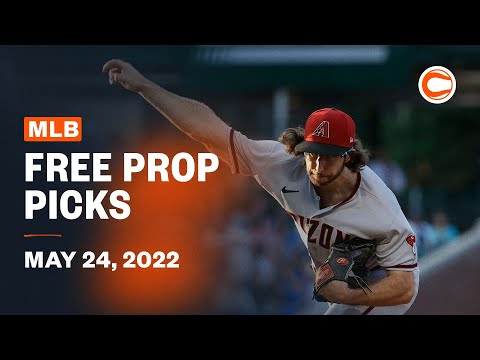 The MLB player props buffet is open and we've got a variety of dishes available for your betting pleasure. Tonight, we're looking at a switch-hitting Pirate who owns southpaws set to clear his total bases prop against a pitch-to-contact left-hander. Additionally, we've got value on the stolen bases market and are taking the Under on an ace's strikeouts number.

Dive in with our favorite MLB player prop picks for Tuesday, May 24.

MLB props for May 24

Reynolds is a wrap

On the whole, Pittsburgh Pirates outfielder Bryan Reynolds has not had a scorching start to his season at the plate. But you can find major value on his prop for total bases if you strike when the time is right. Tuesday is one of those days.

The Pirates host the Colorado Rockies for the second game of a three-game set. The visitors are slated to send left-hander Kyle Freeland to the hill, which should be music to Reynolds' ears.

Freeland has kicked off his season by going 1-4 with a 4.85 ERA in 42 2-3 innings while allowing 54 hits. The 29-year-old has never been an overpowering pitcher, relying on pitching to contact to get hitters out, and that can bite him if he's not precise. And while he doesn't issue walks with abandon, he's getting hit around with regularity. He's allowed a whopping 19 hits over his last 10 2-3 innings.

Reynolds, who has typically hit second or third in every game this season, will get his opportunities to take hacks. The switch-hitter hasn't struck out in five games, which should help against a pitch-to-contact southpaw like Freeland, and he's batting .324 against lefties this season.

If that sample size is too small, Reynolds has been effective vs. lefty pitching his entire career, owning a .289 batting average against them over his four MLB seasons.

Oh, and in case the Pirates chase Freeland early and Reynolds has yet to cash, no bullpen has a higher ERA than Colorado's 4.90, and only the Diamondbacks' relievers have a worse batting average against on the whole.

Tommy, can you steal me?

Toronto Blue Jays ace Kevin Gausman is off to an incredible start to his tenure with the club. He only just allowed his first home run of the season in his last start and has only issued three walks in 50 innings. However, there is one category where he has been at least somewhat deficient: Holding runners.

While Noah Syndergaard is the dirt worst at preventing the stolen base (12 have been swiped on his watch), Gausman has allowed the second-most among American League pitchers this season with six. And while both pitchers are on the rubber tonight, I'm targeting Gausman (though, if Eli White's stolen base prop shows up at some point, take him against Thor).

The St. Louis Cardinals lead the major leagues with 37 stolen bases, with Tommy Edman and Harrison Bader being the primary culprits with 11 apiece. And while you can get Bader at around +380, Edman is the better play if you're dabbling in the stolen base market.

For one, Edman gets on base at the better clip with a .369 OBP compared to Bader's .301. Second, Edman has firmly entrenched himself as the team's leadoff hitter, batting atop the Cardinals lineup in 28 of his last 29 games. This gives him more chances to get on base while also gaining an early opportunity to do so without someone else getting on in front of him, clearing up the basepaths for him to create chaos.

Edman has a stolen base in each of his last two games and has only been caught once all season. With Gausman and his deliberate delivery making him prone to would-be base stealers, Edman is in an excellent position to pay dividends.

Arizona Diamondbacks righty Zac Gallen is rightly being considered as one of the National League's current front-runners to win this year's Cy Young award. He's 3-0 with a microscopic 1.14 ERA through seven starts. But the strikeout hasn't been the secret to his success.

Gallen is punching out less than a batter per inning and his best strikeout output came when he tallied nine Ks against the Chicago Cubs two starts ago. The Cubs strikeout in 24.6% of their plate appearances on the whole, which is the fourth highest in MLB.

Compare that to Gallen's opponent tonight, the Kansas City Royals. Only four teams go down on strikes less frequently than the Royals (20.2%). K.C. doesn't score a lot of runs but it's a team that makes consistent contact.

Gallen has gone over Tuesday's total of 5.5 strikeouts just three times in seven starts and the Under can be found at plus money at FanDuel. It's otherwise available at even money at various other books at the time of this writing.

The right-hander's strikeout numbers should tick up at some point this season as he's touching new heights with his fastball velocity and has typically fanned more than 10 batters per nine for his career, but the Royals are pesky from top-to-bottom and banking on Gallen to go Over this modest number is a trap.

Yankees vs Astros Picks and Predictions: One Night in Houston
Chris Hatfield | Jun 30, 2022