Despite their comfortable lead atop the AL East, the Yankees are just 5-5 across their last 10 and are now sending a vulnerable Domingo German to the mound. The Mariners are countering with a formidable Marco Gonzales, making them a live underdog.

The Seattle Mariners and the New York Yankees will lock horns for the first of three games at Yankee Stadium on Monday night.

After dropping both Subway Series tilts against the Mets, the Yankees bounced back by taking three of four against the Royals over the weekend to maintain their comfortable AL East lead.

The Mariners have been rocky since the All-Star break, sandwiching six losses over seven games against the Astros with a three-game sweep of the Rangers.

Will the Yankees reward the chalk players in this spot? Find out in our free MLB picks and predictions for Mariners vs Yankees.

The Yankees opened as consensus favorites of -165, but bettors have pounded that line down to the -185 to -190 range at the majority of sportsbooks. The total was unveiled at 9 and has seen little movement.

Marco Gonzalez (6-10, 3.66 ERA): Marco Gonzales has authored 10 quality starts over his last 14 efforts, with five of those coming on the road. However, the Colorado-born southpaw can struggle to stop the home run ball at times (17 allowed over 113 innings in 2022), and he doesn’t typically rack up the strikeouts (4.8 per nine innings). Gonzales has a 3.22 ERA and a 0.95 WHIP over 19 career innings against the Yankees.

Domingo German (0-1, 8.22 ERA): Domingo German has not impressed in either of his first two starts of the campaign. After allowing five runs in only three innings of work against the Astros on July 21, German was chased after allowing two runs over only 4 2-3 innings against the Mets. His WHIP is currently a sky-high 1.83.

The Mariners are 11-4 in their last 15 road games against right-handed starters. Find more MLB betting trends for Mariners vs. Yankees

Mariners vs Yankees picks and predictions

The Yankees are being bet down far too much in this contest, making the Mariners moneyline a worthwhile wager.

Seattle has a clear-cut advantage in the starting pitching department as Marco Gonzales squares off with Domingo German. Gonzales gets by on guile rather than power, which doesn’t make him look nearly as effective as he is. However, he should keep the Bombers on their heels early on, as his opponent batting average the first time around the lineup is .244, and .235 the second time through. It’s the third time through the order that typically gets him into trouble, as opponents are batting .328 against Gonzales.

The Colorado native has good prior numbers against Andrew Benintendi and Aaron Judge, with the former going 0-for-10 lifetime, and the latter going 0-for-6.

Once Gonzales exits, a solid Seattle bullpen that’s 10th by ERA (3.57) this year will take over. Paul Sewald (13 saves) has had an excellent season, and though he’s pitched back-to-back days, he’s thrown a total of just 22 pitches in those games. Other reliable options for Mariners manager Scott Servais include Andres Munoz (seven holds in July) and Ryan Borucki (0.96 ERA in July).

German has been a bitter disappointment for a Yankees rotation that could have used a boost after Luis Severino (shoulder) hit the IL. He’s allowed 11 hits over 7 2-3 innings, three of which were home runs.

The M’s are missing some pop in their order right now with Julio Rodriguez (wrist) on the shelf, but their table-setters can still be counted on to generate some runs. J.P. Crawford is fresh off one of his better months of the campaign, as he hit .275 in July. Adam Frazier hit .314 in the same span, recovering from a dreadful month of June (.141 average).

The Yankees’ No. 1 offense by runs per game (5.35) should not go quietly against Seattle, and that should help Over players score here.

Even if Benintendi and Judge are neutralized by Gonzales, the southpaw still has to contend with Gleyber Torres, DJ LeMahieu, and Isiah Kiner-Falefa, all of whom hit above .300 in July. LeMahieu stood out with his .341 average and .926 OPS.

Then there’s the power threat that the resurgent Matt Carpenter brings to the table – he hit nine homers last month, second only to Judge (13) on the team. He was also second to Judge in RBI (32-23), so Carpenter’s blasts have been well-timed too.

New York will want to get the timing right against Gonzales, who can be susceptible to the longball (17 homers allowed over 113 innings), especially toward the end of his outings.

Trend bettors should note that the Over is 12-2 in the Yankees’ last 14 games after scoring five or more runs in their previous game, and 8-1 in their last nine home games.

It would have been difficult to say this earlier in the year, but there’s a path to victory for the Mariners even if they’re down late against the Yankees.

New York closer Clay Holmes had another rough outing against the Royals on Sunday, blowing only his third save of the year by giving up three earned runs on a Salvador Perez homer in an 8-6 defeat. It was reminiscent of his four-run implosion against the Reds on July 12, the last time he squandered a save chance.

Holmes had great command earlier in the year – issuing only five walks through 36 2-3 innings – but his eight walks allowed over nine innings last month is a red flag.

Seattle should be getting much more respect in this spot. Back them at this generous moneyline price. 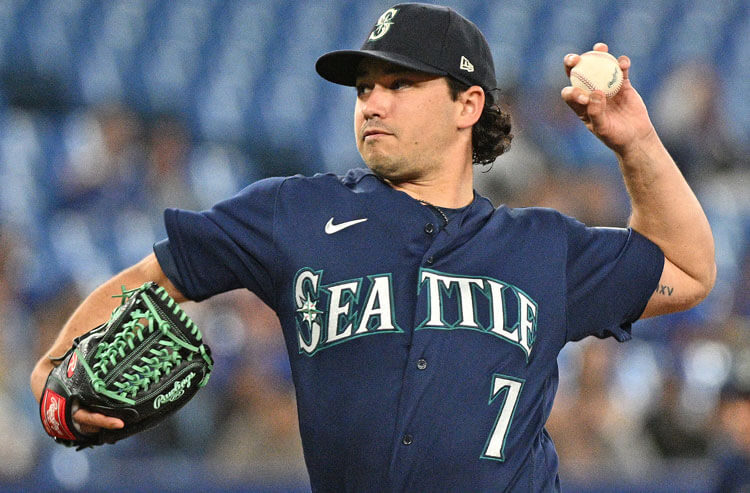