Dodgers vs Giants Picks and Predictions: Rivals Set For Game 1

Despite what should be another deep outing from Logan Webb, L.A.'s red-hot batting order presents too much of a challenge to be faded. As such, our MLB betting picks are rolling with the Dodgers and their more than reasonable -140 moneyline price.

The Dodgers (68-33) have the best winning percentage in baseball at .673 and look to continue what they hope is another deep playoff run.

The Giants (51-51) faltered out of the gates in returning from the All-Star break but got back on track by taking three of four games from the Cubs.

Monday’s game marks the fifth meeting between these teams since the All-Star break.

Check out our MLB picks and predictions for the Los Angeles Dodgers and San Francisco Giants on Monday, August 1.

The Giants opened as +110 underdogs at home but the line has moved against them. Currently, they reside between +118 and +130 depending on the book. The total opened at 7.5 but has moved to 8 across all books.

Andrew Heaney (1-0, 0.47 ERA): Heaney has made only four appearances this season due to shoulder and back injuries. He returned to the rotation after a two-month absence last Wednesday and tossed four scoreless innings against the Nationals. He had a disappointing 2021 season with the Angels and Yankees but has looked good over a small sample season with the Dodgers in 2022 thanks primarily to a new off-speed pitch that he calls a “sweeper”.

The Giants are 1-7 in their last eight during Game 1 of a series. Find more MLB betting trends for Dodgers vs. Giants

The starting pitching advantage in Game 1 lies with San Francisco. Logan Webb has a 2.91 ERA and was excellent in his only start against the Dodgers this season, tossing six innings of one-run ball. He’s looking to keep his ERA below 3.00 for the second straight season and has developed into a high-end starter.

Heaney records a ton of strikeouts (34.6% strikeout rate this season, 24.5% in his career) but issues too many walks (9% walk rate this season, 6.7% in his career). He gets hit hard, as his career BABIP is .295 which means his .220 BABIP in a small sample size this year is due to regress. He looked good in his return to the rotation last Wednesday but threw only 71 pitches, so it appears as though he’s not fully stretched out yet.

When it comes to the lineup, the Dodgers hold a significant advantage. In the month of July, Los Angeles ranked second in wRC+ while San Francisco lagged behind at 18th. The Giants are shorthanded and will be without All-Star Joc Pederson, Evan Longoria, Brandon Crawford, and Thairo Estrada.

The Giants are just 1-7 in their last eight during Game 1 of a series and are 0-7 in their last seven games against NL West opponents. The Dodgers have won four straight meetings against their rivals.

I believe the lineup difference is bigger than the starting pitching edge. The Dodgers have been the best team in baseball and are the rightful favorite.

If the line gets too wide I’d have to look the other way as Game 1 is a close handicap, but -140 isn’t a bad price on the best team in baseball.

The total opened at 7.5 but has moved to 8 as bettors are liking the Over. Let’s dive in to see if I agree with that line movement.

The Giants have hit left-handed pitching well this season, ranking eighth in wRC+ against southpaws on the season. They have a higher batting average (.242 to .229), on-base percentage (.324 to .316), and runs per nine innings (5.32 to 4.45) against lefties than they do righties.

The Giants are 37-18 in their last 55 home games against a left-handed starting pitcher, so it’s evident that they might have success in this matchup despite being down a few regular lineup members.

Dodger bats continued to mash in the month of July, ranking first in OPS, first in wOBA, and second in wRC+. Webb is a quality pitcher, but even the game’s best arms have to be wary when facing this Los Angeles lineup.

When it gets to the bullpen, I can’t trust San Francisco’s relief options. The Giants have a 4.41 ERA and 1.40 WHIP in relief this season, both Bottom-5 marks in the league.

I’ll take the Over as I agree with the steam that caused early line movement.

We’re hitting the pitcher prop market for our best bet, where Logan Webb’s number of outs recorded is listed at 17.5.

Webb has recorded at least 18 outs in each of his last nine starts. The Giants have a Bottom-5 bullpen in the league statistically and look to keep Webb in the game as long as possible considering the alternative. I expect that to be even more so the case against their rival Dodgers, against whom Webb was allowed to throw 103 pitches in his last outing.

He’s been a remarkably consistent pitcher, allowing no more than four earned runs in any of his 21 starts this season. Since he effectively avoids blowups, he typically isn’t pulled from games early.

You’ll have to lay the juice with this prop, but I believe it’s worth it as Webb goes for 10 straight outings where he pitches at least six innings. 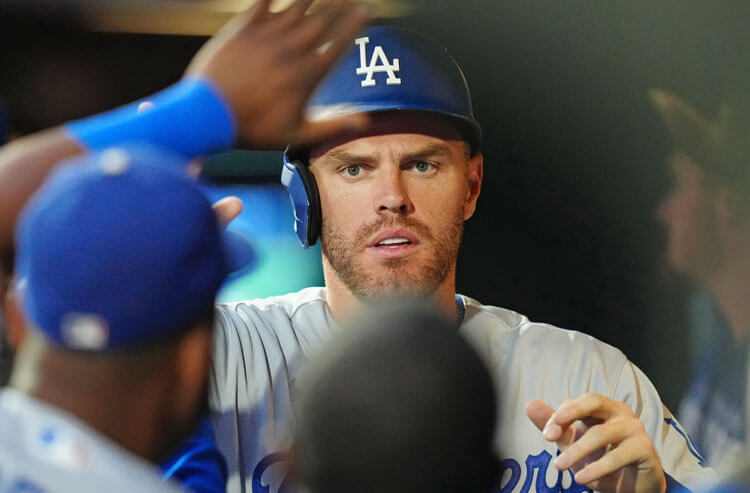 Dodgers vs Giants Picks and Predictions: Rivals Set For Game 1
Provided by