The Mets are starting Max Scherzer in nearly unstoppable form while the Nationals are sending one of the easiest starters to fade to the mound. We suggest you back the Mets any way you can — a few of which we've highlighted in our MLB preview below.

As the trade deadline approaches, all eyes are on Juan Soto and the Washington Nationals, who have actually been playing some of their best ball of late, going 5-5 over their last 10.

The Mets continue to lead the NL East and have won seven of their last 10. Additionally, they come into this one after back-to-back series sweeps against the Yankees and Marlins.

Read our MLB picks and predictions to find out who will grab the first game of the series.

Today's odds opened up with the Mets as massive -245 favorites. Since then, they've taken a bit more money and are around -250 favorites. The Nationals return at the attractive price of +210.

Max Scherzer (6-2, 2.09 ERA): After an injury delayed the start of his season, Scherzer has been about as good as you'd expect. He is coming off his best month of the season, where he posted a 1.39 ERA, including a seven-inning shutout of the Yankees in his last start. There's not much to add about Scherzer that you don't already know; it's been status quo as he continues to be one of the best pitchers in the league. Something new, though, is his barrel rate. It's the highest in his career at over 10%. Fastball pitchers will always give up home runs at a higher clip than any other pitcher, and that's no different for Scherzer. You aren't going to get after Scherzer in many other ways than hitting than longball. That seems to be more accurate this season than ever before.

Patrick Corbin (4-14, 6.49 ERA): I'm slightly surprised that the Nationals haven't sent down Corbin. Things have been quite rocky this season for him, especially in July. Over five starts, Corbin gave up 21 earned runs in just 40 innings. That included three consecutive starts to the end of the month of surrendering five or more earned runs. There's not much positive to say about Corbin. His hard-hit rate is one of the worst of all starting pitchers and he doesn't exactly help that matter with a barrel rate that's only slightly better. Corbin uses a good mix of pitches, with slider and sinker being his most preferred.

Mets vs Nationals picks and predictions

This is the most uneven pitching matchup of any game I've handicapped this season.

When you have a massive favorite like the Mets are tonight, you tend to find yourself looking for any way the upset can be pulled off, but I just don't see it. My projections make the Mets -200, and that feels rather generous. So I'll be rolling with the chalk and New York.

I see the most significant edge in the first five innings market, and that's what we'll be attacking here. First, we must consider that Mad Max will go over five innings. He's done that in every start he's made this season, so there's no real reason to suggest otherwise today.

With that in mind, we can genuinely expose this pitching mismatch for what it is: A future Hall of Famer vs. a pitcher barely throwing at a major league level.

As I mentioned at the onset, the best way to attack Scherzer is barrelling up the ball and hitting it out of the park. He has an elite strikeout and walk rate and does a fantastic job of inducing soft contact on pitches that aren't barrelled up. Because of that, it's challenging to get to him in other ways.

We're not banking on it, but we have to consider that the Nationals' two best barrel hitters, Juan Soto and Josh Bell, could be traded and pulled out of the lineup. Even if they aren't, who knows where their focus level will be for this one?

And even if they are a full-go, the lineup with them has them tied for the third lowest barrel rate in baseball. Scherzer has faced one other team in the Bottom 5 of barrel rate, the Cinncinati Reds, who also have the third lowest. He held them to six scoreless innings after three weeks of rest. Expect something similar here.

We'll talk a bit more about Corbin in just a few moments, but it feels inevitable that the Mets have some success against him, and with Scherzer on the mound, they won't need much.

Now, this brings us to the Patrick Corbin part of the handicap. If you're a fan of his, you may want to look away because we'll be fading him in a big way here.

The Mets are as hot as any team in baseball right now. They've won six straight games, and two of those were against one of the best teams in baseball. Yet, tonight they are facing off against the worst pitcher in their division. That spells disaster.

Maybe it's harsh, but I'm not sure Corbin would be a starting pitcher in another rotation for any other team in baseball. This matchup, in particular, is a big problem for him.

Corbin is a sinker and slider pitcher, and both those pitches have produced a run value of over 11. The Mets? They are one of the best breaking-ball hitting teams in the bigs. New York has an OPS Of .742 against finesse hitters and has several big bats hitting breaking balls exceptionally well.

This looks pretty straightforward for the Mets tonight. Our projections are seeing close to a 15% edge, with the Mets going over this total 70% of the time.

There are many creative ways to attack this game. It has all of the ingredients of an outright blow-up which makes the alternative lines attractive.

Base props for players such as Pete Alonso and Franciso Lindor also look nice, but no edge is as heavy as the first five innings spread. I understand that everyone is not interested in laying the -180, though.

Because of that, let's look to Scherzer to get the win instead at a much better price. You're betting the same thing with a guy like him on the mound. He has gone five or more innings in every start this season, and there's no reason to suggest that changes here. 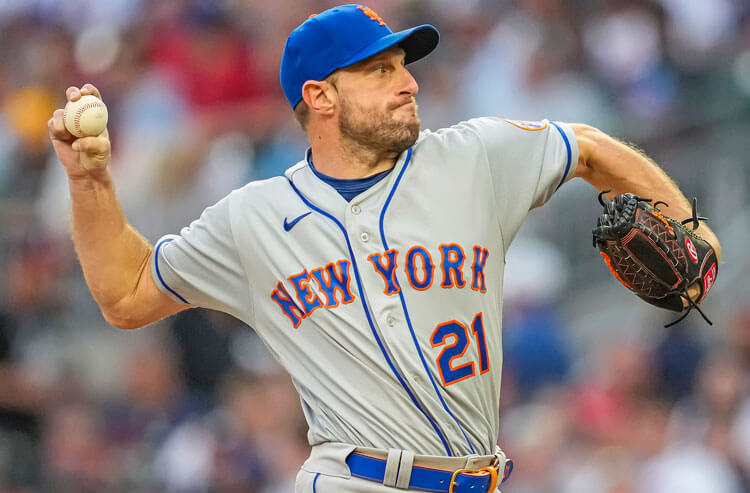 Mets vs Nationals Picks and Predictions: Handicapping This Unfair Pitching Matchup
Provided by