It has been a disappointing start to the season for both the Chicago Cubs and Atlanta Braves. Both sit at 10-12 for the year and have struggled at preventing runs.

The opener of this National League series was a perfect example of that, as the Braves were able to outslug the Cubs 8-7. Can starters Trevor Williams and Ian Anderson reverse that trend, or will the bats keep cracking?

Check out our MLB free picks and predictions for Cubs vs. Braves on Tuesday, April 27, with first pitch scheduled for 7:20 p.m. ET.

Trevor Williams (2-1, 4.66 ERA): Williams has been a little better than his ERA indicates and has pitched well in his last two starts which came against the Mets and this same Braves squad, having allowed just three runs on nine hits while striking out 10 in 10 innings of work. Williams can be successful if he keeps his fastball out of the middle of the plate and limits the walks.

Ian Anderson (1-0, 3.27 ERA): Anderson is coming off his best start of the season, shutting out the New York Yankees on just four hits over 6 2-3 innings. But let’s be fair — who hasn’t shut down the Yanks this season? Jokes aside, Anderson has two good and two not-so-good starts this season and needs to cut down the walks, as he has issued eight free passes n his last two starts, compared to just 10 strikeouts.

The temperature is expected to be 78 degrees Fahrenheit and mostly sunny for first pitch, with winds of 5 mph blowing south and wind gusts of 9 mph. Be sure to monitor the gametime conditions with our MLB weather info.

The Over is 6-2-1 in the Cubs' last nine road games versus a right-handed starter and 9-1-1 when the Braves play at home this season. Find more MLB betting trends for Cubs vs. Braves.

It’s not surprising the Cubs and Braves played to an 8-7 game in the opener, as the teams are close to mirror images of each other at this point in the season. Both are 10-12. Both hit for power but not average. And both pitching staffs are struggling. So, who has the betting edge in this one?

While Anderson has the better ERA of the two starters, he is the one serving up long balls at a much higher rate. Anderson is giving up 1.23 home runs per nine innings while Williams comes in at a much lower 0.47.

Maybe a little surprising is the fact that the Cubs have the better bullpen in this matchup. The Cubs’ relievers rank 10th in ERA, ninth in opponent batting average, and 23rd in WHIP, while the Braves rank 20th, 17th, and 27th, respectively, in those three categories.

We're giving the Cubs' power bats a slight edge here and they give you much more value as moderate underdogs in a game that's probably closer than this line indicates.

Game 1 secured the Over by the top of the third inning and we could be in for more of the same in Game 2. As noted, these are two power-hitting teams and that was on display yesterday as each team went deep twice.

The Braves rank eighth in MLB in scoring at 4.75 runs per game while the Cubs are 12th, putting up 4.57 a contest. The clubs are tied for fourth in the majors with 30 homers apiece. And even though neither team is hitting for a good average right now both have talented lineups that you'd expect to improve.

When you mix in two OK starters and some questionable bullpens this game is a good bet to go Over once again, particularly when you consider the Braves have been a great Over bet at home. These teams have already played to the Over in three of their four meetings this season. 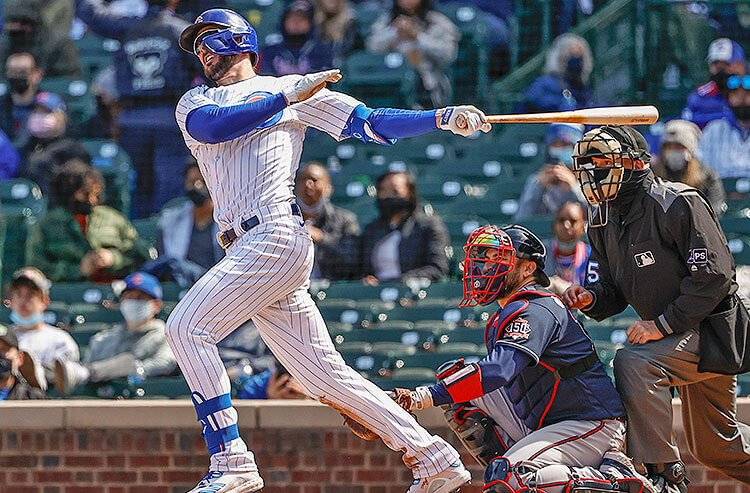