Brewers vs Giants Picks and Predictions: Burnes' Hot Stretch Has Us Backing the Road Chalk

The Giants have the MLB's best record, and they're getting plus money at home against a Brewers team that just lost two of three to the Twins. So why are we going with Milwaukee in our MLB betting picks today? Corbin Burnes, that's why.

The Milwaukee Brewers just lost a road series to one of the league's worst teams and now try to get back on track against the best team in baseball when they kick off a three-game series against the San Francisco Giants on Monday night.

Despite some ugly weekend losses, the Brew Crew are sending out their ace Corbin Burnes, meaning MLB betting lines have pegged Milwaukee as a road favorite at Oracle Park.

Here are our best free MLB picks and predictions for Brewers vs. Giants on Monday, August 30, with first pitch set for 9:45 p.m. ET.

Corbin Burnes (8-4, 2.30 ERA): While he's coming off a horrible start by his standards — six innings, four runs — Burnes has been on an absolute tear recently, surrendering one (or zero) runs in eight of his last 10 starts. The electric righty is on the shortlist of NL Cy Young candidates, ranking in the 95th percentile (or better) in average exit velocity, hard-hit percentage, whiff percentage, strikeout percentage, and chase rate — which the Giants saw first-hand in early August, when he held them to one run on four hits over seven innings.

Johnny Cueto (7-6, 3.73 ERA): Burnes gets it done by throwing straight gas, whereas Cueto uses much more theatricality and deception. The 35-year-old vet consistently uses four different pitches, of varying speeds and movements, while also throwing multiple windups, slide steps, and anything else to keep hitters off balance. Cueto recently faced Milwaukee, giving up three earned runs on five hits across 5 1-3 innings back on August 8.

Brewers: Eduardo Escobar 3B (Out).
Giants: Kris Bryant 3B (Day-to-Day), Evan Longoria 3B (Out), Donovan Solano 2B (Out).
Find our latest MLB injury reports.

The Under is 5-2-1 in the Brewers' last eight games as a road favorite. Find more MLB betting trends for Brewers vs. Giants.

Let's be honest: We wouldn't blame you for backing the MLB-best Giants. Who are at home. Getting plus money. Against a Brewers team that just lost two of three to the pathetic Twins.

Nope, wouldn't blame you at all. But we'd disagree with you, for one reason:

Milwaukee's ace has gone absolutely gangbusters since the end of June, sporting a 1.96 ERA over his last 10 games and giving up one or zero runs in eight of those 10 starts. His 2.30 ERA for the season is second in the MLB,  his 12.18 K/9 is the best mark in the majors, as is his 6.92 K/BB. He also gave the Giants a taste of his nastiness four starts ago, silencing them for one run on four hits over seven innings.

I see no reason why Burnes, especially coming off a "bad" outing (for him) doesn't go back to his usual studly ways, followed by a bullpen that is eighth in the Majors in ERA, first in K/9, and second in strand rate this season.

With the Giants unlikely to score many runs, that takes some of the pressure off a Brewers offense that struggled a bit recently, scoring the 10th-fewest runs in the MLB over the last 15 days. Milwaukee has averaged just 4.25 runs per game over that stretch — including a total of 10 runs in three games against Minnesota — but should be able to scratch a couple off of Cueto, who has seen at least three runs scored on him in five of his last eight outings.

The total for this game is a tiny 7.5, in large part because Burnes has been that good — and Milwaukee's offense has been struggling and faces a competent pitcher in Cueto.

We mentioned Milwaukee's recent scoring woes, but the Giants haven't exactly been mashing the cover off the ball either, scoring three or fewer runs in seven of their last 11 games.

Looking at recent trends, the Under is 4-0-1 in the Brewers' last five games and 5-1-1 in San Fran's last seven overall — and that's the direction we're leaning in tonight. 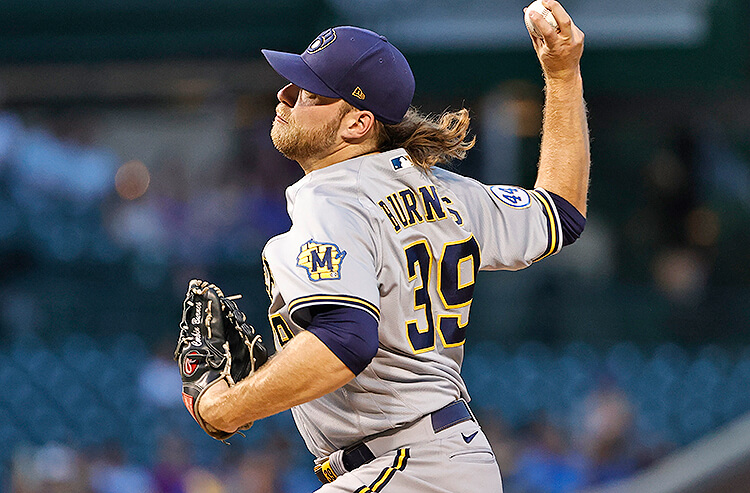 Brewers vs Giants Picks and Predictions: Burnes' Hot Stretch Has Us Backing the Road Chalk
Provided by