Brewers vs Cardinals Picks and Predictions: Surging Cards Have Value as Home Dogs

St. Louis has won six straight and eight of its last nine heading into Tuesday's series opener against a dominant Corbin Burnes and the Brewers. With Adam Wainwright (1.96 ERA in August) on the bump, the Cards have plenty of value as +130 home dogs.

While the Milwaukee Brewers appear to have ended the National League Central race already, the surging St. Louis Cardinals still have their eyes on the second wild-card spot, making this three-game showdown that begins Tuesday a pivotal series.

St. Louis has won six straight games and is fighting with a few teams to challenge the San Diego Padres for the final playoff spot. Looking to make it lucky No. 7, the underdog Cardinals will send Adam Wainwright to the hill against Milwaukee ace Corbin Burnes, who is coming off his most dominant start of the season.

Find out who we like in our free MLB betting picks and predictions for Brewers vs. Cardinals on August 17.

Corbin Burnes (7-4, 2.23 ERA): Burnes has been a beast all season and took it to another level his last time out. The hard-throwing righty punched out a career-high 15 batters on August 11, while walking none and holding the Cubs to four hits. It was his sixth double-digit strikeout game of the season and second in his last five starts.

Adam Wainwright (11-6, 3.27 ERA): The St. Louis righty is having his best month of the season, lowering his ERA in each of his last three starts while striking out 18 and issuing three walks over that stretch. The Cardinals have won each of Wainwright's last four starts.

The Under is 8-3-2 in the last 13 meetings between the Brewers and Cardinals. Find more MLB betting trends for Brewers vs. Cardinals.

The Cardinals are getting hot at the right time and while they have beaten up on inferior competition, they've still been winning games and they don't control the schedule. They've taken advantage of the opportunities in front of them, winning six straight and eight of their last nine, all coming against the basement-dwelling Kansas City Royals and Pittsburgh Pirates.

They are coming off an emphatic sweep over K.C. in which they demolished the interstate Royals by a combined score of 22-6. While the hot run has done nothing to help them catch the Brewers in the NL Central, as Milwaukee enters this series with a double-digit lead over St. Louis, the Cardinals are suddenly in the wild-card race. And who better to get the ball for this big series than the veteran Wainwright, who isn't pitching like the 39-year-old he is.

Wainwright, who assumed the role of staff ace with Jack Flaherty sidelined for over two months, is having his best season in years and the Cards have won 10 of his last 13 starts since the beginning of June. He has allowed more than three runs only once over that stretch.

Burnes, meanwhile, is a force and the Brewers have been getting in the win column when he starts, nabbing wins in each of his last five outings and notching the W in nine of his last 11 starts. He will be a handful for St. Louis' offense which has had the luxury of beating up on two of MLB's worst teams over the last week and a half. But don't expect Burnes to put up another 15-strikeout performance.

While he can impose his will on any team, he had a perfect matchup last start to inflict damage, facing the top swing-and-miss team in the majors in the Cubs, who just traded away nearly all of their good players. The Cards, meanwhile, are one of the hardest teams in baseball to strike out, sporting the sixth-lowest K rate, and a Top-10 mark in contact percentage. And their two big middle-of-the-order bats in Nolan Arenado and Paul Goldschmidt have both been hitting the ball with authority since the break, making this Bottom-10 offense in terms of runs per game and wRC+ a lot more fearful.

The Cardinals have played significantly better at home this season and offer good value on the ML behind Wainwright. They aren't the better team and are up against one of MLB's best, but they are worth a gamble at +130 in front of the home crowd at Busch Stadium.

Both teams are sporting Top-10 offenses in OPS since the All-Star break, with the Brewers ranking third and the Cardinals eighth, but this matchup is all about the starting pitchers.

Wainwright has been really strong after two shaky months to start the season, putting up a 2.63 ERA over 13 outings since June. He has a mark of 1.96 over three August starts and has gone seven-plus innings in each of his last five trips to the mound.

While he'll be up against a much tougher offense than the two clubs he faced in his last two starts (the Royals and Pirates), his ability to keep the ball in the yard, limit free passes, and punch batters out — he has fanned 38 while walking six over his last six outings — will serve him well against any team.

Burnes, on the other hand, continues to cement himself as one of the game's best starters. Minus a hiccup against the Braves to close out July, he has been a run-suppressing machine, allowing one or zero runs in seven of his last eight outings. Like Wainwright, Burnes doesn't get burned by the long ball, doesn't walk batters, and racks up Ks — the only difference being that he is better than Wainwright in all three categories. In fact, he's elite in all three, leading to an MLB-best 1.52 FIP, and putting him third on the National League Cy Young odds board.

Both starters have shown no issues going deep and both benefit from strong bullpens to back them up. Milwaukee's relievers have the top ERA in the majors over the last month, while the Cardinals sit ninth.

The Under is 8-3-2 in the last 13 head-to-head meetings and 5-2 in the last seven in St. Louis. Busch Stadium is not a great offensive environment and we don't expect the bats to break out with these two on the mound. Follow the trends. 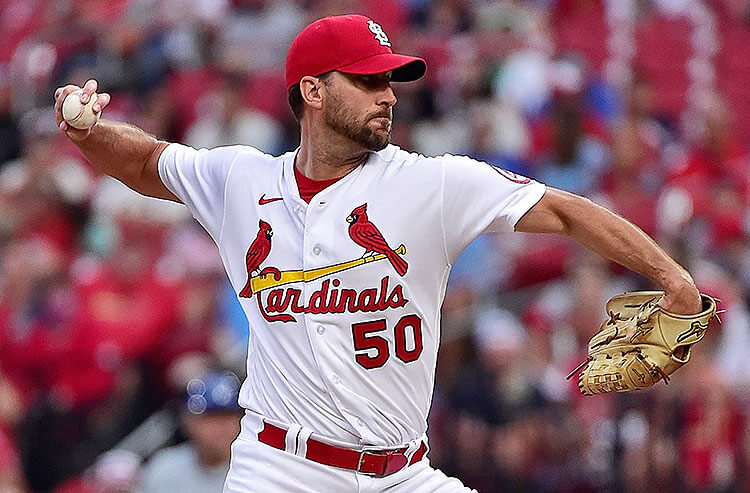 Brewers vs Cardinals Picks and Predictions: Surging Cards Have Value as Home Dogs
Provided by